"It's not having what you want," quips Roslyn Assistant Superintendent Pam Gluckin in her Long Island accent, "it's wanting what you got."

And what educators got from HBO's Bad Education was a harrowing detail of a pair of school administrators gone rogue with the school district's treasury, sacking $11.2 million before they were caught... by a 16-year-old student reporter.

The movie places us in the midst of a Roslyn-to-riches storyline, where the district, once the punching bag of the mid- to high-class North Shore was now one of its most successful schools. At least that's how long-time superintendent Dr. Frank Tassone (played by Hugh Jackman) pitched it to his school board, led by President "Big" Bob Spicer (Ray Romano), who were intensely focused on all the things that matter in education: test scores, Ivy League placement, and property values. 🙄

Tassone is portrayed by screenwriter (and Roslyn alumnus) Mike Makowsky as a school district superintendent dreamboat: he's as conscious about his carbs as he is about his teachers' backstories. He's as omnipresent around campus as a smoothie is in his hand. He's polished and yet approachable enough to receive a gift basket from members of the community. But Tassone's office is certainly lacking a sense of sunlight - and that's not because there's no window.

The other administrator in this Bonnie & Clyde heist is Pam Gluckin (played by an underscored Allison Janney), who is the business brains behind the slyly sidestepped spreadsheets. Gluckin comes across as approachable but stern, regimented enough in her understanding of the budget that, like a vigilant goalie, nothing gets by her.

Except, of course, when she's placing the puck in her own goal.

The sleuth uncovering the truth is Rachel Bhargava (Geraldine Viswanathan), a fictional character based on real-life student Rebekah Rombom. The story begins as innocently as a "puff piece" on the upcoming building project dubbed "Skywalk." Bhargava is a reporter for the student-run Hilltop Beacon who is "just doing her job." After speaking with Tassone, he challenges her that "it's only a 'puff piece' if she makes it one." So she dives in.

The keys to the vault are metaphorically and literally passed from Gluckin to Janney. And soon the simple piece on a dazzling new, unnecessary building upgrade is soon pushed over by plunging into purchasing orders. As she and her father (who provides amazing support in this scandalous story) pour over PO's, she comes to realize the math and rationale don't align.

While Rachel departs the proverbial kiddie pool to deep-dive into investigative journalism, the district's auditor is tipped by a line item that turns out to be Gluckin's home renovation at an Ames store while her son uses the district's credit card.

The story is swept under the rug by Tassone, who claims the negative press stemming from Gluckin's embezzlement will ruin the Roslyn route to the top. Instead of informing the law, they'll accept her resignation because "she's sick." And the board bites on it hook, line, and sinker.

However, young Rachel reaches the zenith of her investigation when she tracks 10 years and $800,000+ of purchase orders to a Manhattan apartment. When she arrives there, she knocks on the door and sidesteps the awkwardness of the situation. But as she's departing, she sees Tassone arrive and key in. It turns out to be the private residence of Steven, Tassone's husband.

I failed to mention that Tassone has been having an affair with Kyle, a former student of Tassone in his early days of teaching English.

And as the net in the goal completely unravels, Jackman's Tassone brilliantly twists and turns things on a pivot back to the accusers, always having an explanation as to how the buck never stops at his windowless desk. I can't say I haven't seen that before from any of our leaders. 🙄

That is... until the police arrive at the Las Vegas home he bought for Kyle and him.

So, educators, if you don't subscribe to your local newspaper or watch your local news station, it's time to begin. Otherwise, the next time there's a Superintendent Tassone who tussles with your staff, who's going to tell your story? your students?

Remember, fellow educators: "It's not having what you want... it's wanting what you got." And what we want to have now and forever are well-run public schools. 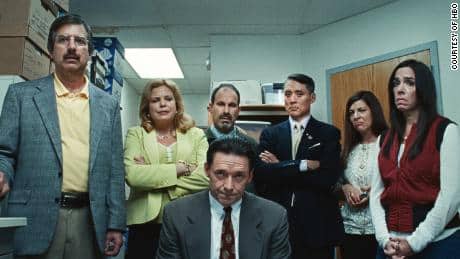 « Dear Teachers of the Arts: The World Still Needs You
What I Miss Most:The Sound of Seventh Grade  »