Depression Kills Teachers if Left Untreated: It Should Not Kill Their Careers | The Educators Room

Recently, I learned that I have been blackballed from a school district from what was cited as “poor performance” after receiving summary evaluation marks that demonstrated performance far above “poor.” In talking to people I used to work for, the only conclusion I could come to (since the school district failed to provide me with any real rationale for their decision) was that after suffering from a serious bout of postpartum depression, there was a time when the facade of happiness faded and I had to take leave eventually to recover from the depression that so heavily weighed me down that I required electroconvulsive therapy. While I recovered, I had let teaching go for a year. A year of vanished memories in which I know I became someone I was not. And yet, when I came back to work and began again at another school, and, by all intents and purposes, flourished. Despite the research, the discussion of depression among teachers has become so taboo that school districts are still uncomfortable discussing it and the implications it can have on the lives of teachers.

In a previous article, I discussed the rise of mental illness in teachers. Given the reality of the situation, it's germane to discuss the causes and implications of depression for education and why support rather than rejection should be the solution for teachers. In some school districts, teachers with severe depression are quietly eased out of the profession. Is this the right move? Should teachers lose their jobs for something which, according to research, is more likely a direct result emotional burnout that comes with the occupation? And what goals should administrators and legislators set when it comes to education and the emotional health of educators involved? Would it be healthier to push teachers to hide increasing feelings of depression, resulting in a probable increase in feelings of depression, or to make them feel free to discuss it and get the support they need to combat it?

According to data from the CDC, teachers are, on average 15 percent more likely to die from suicide than people in other occupations. Click To Tweet

Depression Should Not Kill Teachers' Careers

Why should we care about our teachers and their mental health? According to data from the CDC, teachers are, on average 15 percent more likely to die from suicide than people in other occupations. Although depression may not be the only reason that people commit suicide, depression is a likely cause for teachers. Based on research from Yasar and Demir (2015), "the features of teachers' emotional labor affect their emotional burnout" and additionally, "there is a mediating role of depression status while performing their professions." In fact, the emotional labor performed by teachers was found to be a good predictor of depression (Yasar & Demir). In our current climate, where teachers are forced to hide how they feel and display a good attitude despite difficult working conditions, they become more prone to emotional burn-out, say Yasar and Demir. Unfortunately, it's when teachers hide their emotions that "emotional exhaustion and depersonalization levels" increase (Yasar & Demir). For these reasons, along with the CDC data on suicide rates among the teaching profession, it is even more important to address the issue of depression by helping teachers combat it rather than forcing them to suppress it for fear of the destruction of their careers.

So what are some things that could be reasonably done to assist teachers when depression and emotional burnout take hold of them?

Step 1: All administrators should be educated to look for signs of depression in employees.

According to Baldelomar (2018), there are several signs of depression in employees, though not all people express depression ins the same way. Some of the symptoms of employee depression cited by Baldelomar include:

Step 2: Have a conversation with the teacher and express genuine concern

You cannot force an employee to disclose depression and it is up to them to decide whether or not to share that information with you, but if you feel concern that a teacher is demonstrating several signs of depression, showing that you care and want to help can be a great relief. As previously stated, teachers who try to suppress their emotions can become more inclined to emotional burnout and depression, so allowing them a safe space to discuss it without penalty can really make a big difference.

Step 3: Provide resources to help reduce the depression levels of the staff

Even if you don't have a calming place for teachers to go to in the building to reduce stress, amongst other things, there are things you can provide that can help teachers who suffer from depression in the building. Some school districts have what is called an Employee Assistance Program, which is designed to assist employees suffering from a range of problems. This might be something to invest in as a district so that employees are at their best, and is meant as a short-term intervention that can either be utilized confidentially by the employee through self-referral or by the supervisor referring the employee. Either way, the information discussed in this type of program should remain confidential in order to assist the employee without violating their personal health information. Not that I advocate for one program over any other, but the one I am aware of that has been made available in one school district is called Reach EAP, and there is information on the website to help you get a quote to determine the cost of the program. You can find other EAP programs by doing a simple Google search for "EAP programs" if you want to get some different numbers. Either way, programs like these are what might make or break things for a teacher in need.

In the end, given all the research and data provided, it is foolish to ignore depression in teachers and act as if it doesn’t exist. In all likelihood, with the increasing demands on teachers due to legislation that requires more for an unbalanced amount of pay, the emotional burnout in teachers will only increase. With increased emotional burnout, we now know that depression follows and that unchecked depression can lead to suicidal ideation or even attempts. So what is worse for our students and our schools? A recovering depressed teacher who receives support and even help to lessen the depression or a hidden depressed teacher whose feelings fester to the point that the teacher eventually chooses to take his/her life? I would think that the wellbeing of everyone in the school community would be less of a concern with the recovering depressed teacher than the one who leaves unexpectedly and traumatically. What about you? 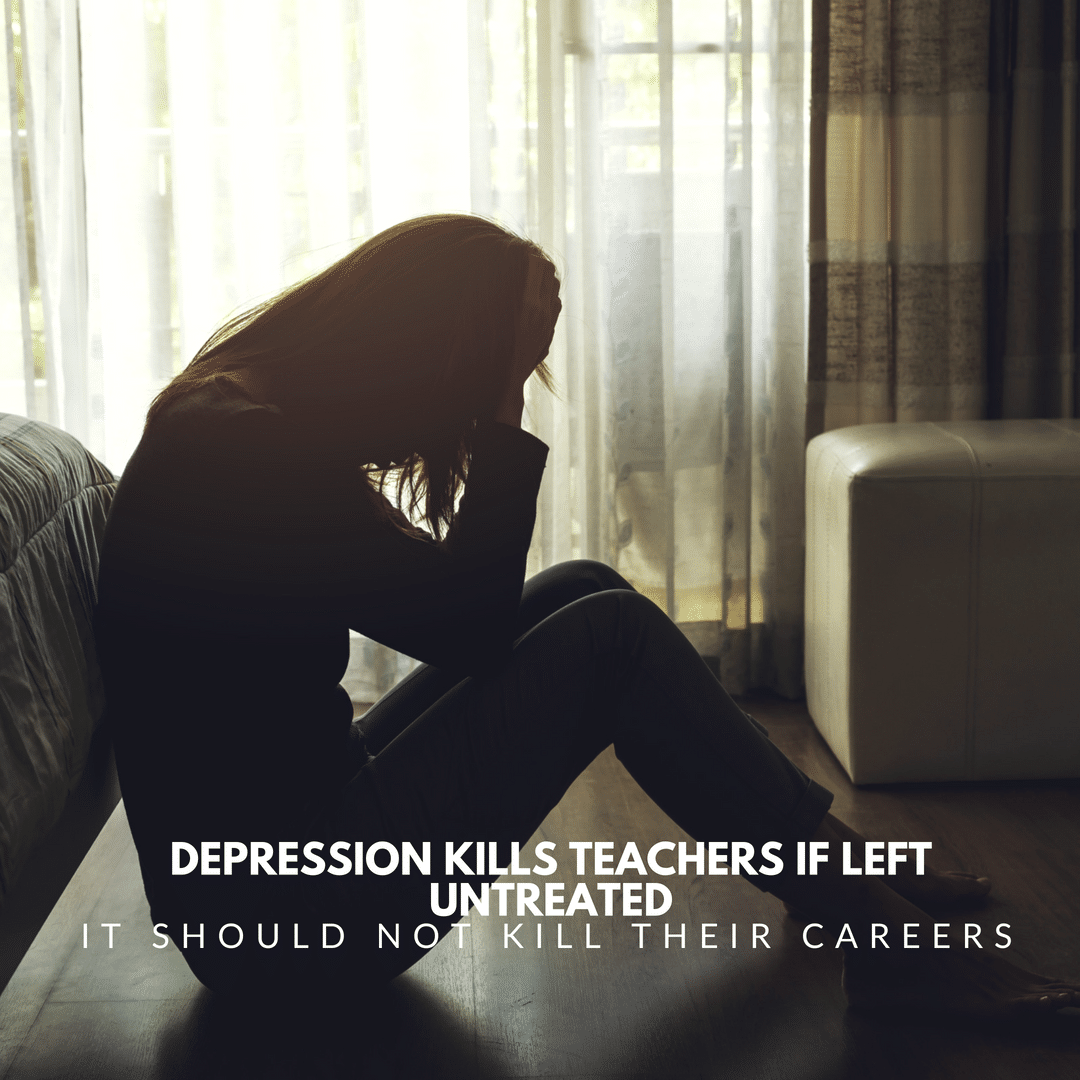 « Creating a Positive School Culture: Why it Really Matters
Why the Most Powerful & Revolutionary Idea in Education Could Happen »