Marisa has taught high school English courses, including everything from 9th-grade special education inclusion to 12th grade AP Literature, for the past twelve years. She is also an avid Creative Writing teacher and advisor for the school's award-winning student art and literary magazine. She is now taking some time to focus on her family and write for pleasure while shifting career paths. She hopes to continue to advocate for students and educators alike and give a voice to those who continue to be unheard.

After resigning from my teaching position last month, I felt very much the same way I did when I frantically packed a bag of essentials and escaped my abusive marriage. At both of these times, I was immersed in a dense fog which made things right in front of me strategically unclear. I was unsure that leaving was the right decision, and I was fearful that I would be unable to find my way on my own. In my mind, it was entirely possible that the problem actually was me and not the toxic behavior I had been subjected to on a daily basis. In both scenarios, I was codependent and in love. When you’re in an abusive relationship of any kind, whether it’s with a person or a job, it’s easy to fall victim to the endless gaslighting you experience and accept a multitude of untruths as reality.

I was only married a year and a half before calling it quits, but it took me over twelve to walk away from teaching.

Over the past decade, I have watched as teachers endured the abuse cycle many times. It begins with tension building as the system asks for teachers to take on more work than they could ever possibly complete in a single day's time. When the workload becomes too heavy, teachers are told to “work smarter” and to “just do it for the children”, which they try desperately to do because, after all, they chose this profession to do just that. They are told to “take more time for self-care,” but are provided with none.

They are forced to cover classes during their non-instructional time because there is a shortage of substitute teachers from the system’s own negligence and poor pay. Due to losing that essential work time, teachers are then forced to take home even larger stacks of papers to grade and lessons to plan while their own children beg for their attention. They are told that they must put student learning first, but also to give up important instructional time to administer standardized tests. They are sent to a relentless stream of meetings on how to treat the world’s ills: poverty, mental health, learning disabilities, trauma, school shootings, illiteracy, abusive parents, bullying, racial and gender inequities, and every other problem under the sun.

They are told to wait for yet another month or two to be paid for the required summer training they completed and to risk themselves and their young, unvaccinated children to return to the building during a pandemic. They become burnt out and beaten down by unsustainable expectations and lack of support.

It is then that an exodus seems imminent.

Union representatives call for their members to organize and take action. It’s brought to public attention that educational staff are being taken advantage of, lied to, disrespected, and hurt. Speeches are made at Board of Education meetings. Educators take to the streets and to social media. There is talk of staff “working to the rule” in order to get their point across about how much unpaid labor goes into the profession. This part of the cycle can go on for months or even years before the school system, fearing their educator lover may leave, offers the smallest of peace offerings: the 2% cost of living increase staff should have received at the beginning of the school year, now months late without any back pay, or an announcement that they are “forming a workgroup to address the issue.”

There is no apology for the mistreatment or concrete action taken, just the manipulative calling card of all abusers -- the empty promise that they will work to do better if you stay.

Maybe this time will be different, we seem to fool ourselves into thinking. In those moments teachers are often too tired from the fight to clearly see that the powers at be have done nothing tangible to change things. And, after all these years as a teacher, I can say that nothing about the working conditions ever do change… at least, not for the better. But, even still, these shallow and disingenuous gestures are enough to convince us, at least for a short time, to show up and do it all over again the next day.

Looking back on it all, I realize that my final straw should have been years ago.

Somehow, the final straw wasn’t when I was given all five of my teaching periods in a row, leaving me without a bathroom break for nearly five straight hours.

The reason it wasn’t any of those things that broke me was that usually someone who has grown tired of the shouts for help going unanswered steps in to fix the system’s mistakes. This was the case when the school system failed to offer their majority-female staff paid maternity leave; in order to assist its impacted members, the union worked to develop a system in which teachers could “donate” their unused sick days to fellow staff members in need. It was the case when I fainted from overheating in my classroom for the fourth or fifth time and a close friend took it upon herself to track down a window AC unit to install. Similarly, when ADA accommodations were denied to countless teachers during the pandemic, empathetic colleagues stepped in to cover their classes so that at-risk teachers could remain safely virtual. And when the county failed to secure COVID-19 vaccinations for their staff prior to forcing a return to the buildings, many teachers joined a large network of “vaccine hunting” volunteers who stayed up late into the night and woke before sunrise to obsessively refresh pharmacy and massvax web pages in order to score appointments for unvaccinated staff.

Though it wasn’t any of those singular moments that did me in, my resignation was the outcome of the same general feeling that rendered me unable to go on in my marriage -- the realization that this is not going to get any better no matter how long I stay. It was death by a thousand cuts, with a promise of a thousand more to come.

But I know from my marriage that nothing changes if nothing changes, so I took it upon myself yet again to make the terrifying leap into the unknown.

But many educators are so trapped by the relationship that they can’t get out. If they leave mid-year for any reason, they risk having their teaching license revoked. When they call HR for help, they have their future job prospects and livelihood threatened. The ability to leave a position before finding another job with a matching salary is also a major roadblock. Most educators have given too many years to their careers to find it feasible to leave, or they’ve put too much money into it, or they aren’t quite ready to mourn the loss of a future they had envisioned, or they have been used to the point that they feel they have nothing left to give to another job. They are screaming out for help, but the system, like an abusive partner, doesn’t care about their needs or offer relief of any kind.

However, it may be too late for all that now. Teachers are collectively reaching a major breaking point. Young teachers are leaving the field within 3 years of entry. Veteran teachers who have poured a decade or more into their careers are coming out of the fog of the pandemic to find remote work options or to transition to a new career entirely. While the decision to leave a profession considered by many to be a calling can be absolutely heartbreaking, many are beginning to see a lifetime in the teaching trenches as wildly unfeasible. They are, if they can, rightfully choosing self over servitude.

To put it simply, the system is collapsing -- and perhaps, for once, we should let it.

When I left my husband, there next came a full year of emotional rollercoastering — I cried and I doubted myself and I struggled to find my balance within it all. But eventually, after a good amount of time and the support of friends and therapy, I cautiously took to dating apps and spent my days filtering through the detritus that is single 30-somethings with loads of emotional baggage (myself included). At many points, it seemed absolutely hopeless. But in the end, I found a man with whom I could live with in a serene peace that was previously unimaginable to me. My only hope now is that in a year’s time I will be able to look back at this second great heartbreak and feel similarly lucky to have walked away. 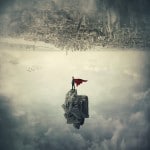 Preparing to Teach in an Upside-down World

Don’t Read the Comments: Digital Teacher Self Care
« Why I Left Teaching and Then Went Back For My Son
Throw Your Perfect Attendance Award Away »