Is it Time to Kill Mockingbird and Embrace Mercy? | The Educators Room

Emma-Kate Schaake is in her fifth year of teaching high school English in Washington. She is passionate about educational equity in curriculum design, classroom practices, teacher leadership, professional development, and student voice. She writes about her ongoing journey to unlearn myopic history, self reflect, and think critically about her role as an educator. She can be found on Instagram @mschaake

Is it Time to Kill Mockingbird?

Until recently, To Kill A Mockingbird

was one of few classics I actually liked. I’ve usually pushed back against the canon, but I could get behind a story about a precocious young tomboy who helps her father fight against racial injustice.

But, as I read it once again with my freshman class this spring, I felt drastically different.

Reading it with a 2020 lens, I cringed when I realized that for all the societal tensions Mockingbird surfaces, it doesn’t offer solutions and perhaps only reinforces narrow narratives that can actually be harmful to my students.

Characters, Then and Now

All the central characters in Mockingbird, save maybe for the narrator herself, illustrate complicated narratives that connect to today’s injustices.

Mayella, a white woman, falsely accuses a Black man of rape, because she knows blaming him can save her from her reality. She is poor and abused, but she still knows how to leverage her whiteness, just as Amy Cooper did in Central Park.

She is a victim of domestic violence, but she lies about rape, playing into the “women lie” narrative that has villainized Christine Blasey Ford and countless others.

Tom Robinson is falsely accused, wrongly convicted, jailed, and shot 17 times when he tries to escape. Jacob Blake was unarmed and walking away from cops when he was seen as a threat and shot into paralysis.

And, of course, there’s Atticus Finch. He is one of the literature’s favorite examples of moral strength. He reminds his children that, “You never really understand a person until you consider things from his point of view… until you climb in his skin and walk around in it.”

But, Atticus never has to walk around in someone else’s skin. He does “the right thing” and defends an innocent black man in Depression-era Alabama, but only because he was assigned to by the court, not because he volunteered.

He’s concerned with his own moral standing and the respect of his children, not necessarily Tom Robinson’s life. He explains, “If I didn’t, I couldn’t hold up my head in town, I couldn’t represent this county in the legislature, I couldn’t even tell you or Jem not to do something again.”

He isn’t fighting for radical change, racial justice, or improving the conditions and attitudes that lead to Tom Robinson’s death. He’s just doing what the moment calls for in a way that aligns with his morals. This summer, many politicians expressed sincere condolences for the loss of Black life. But, in the next breath, they demonized looters for, essentially, not knowing how to grieve or express generations of anger “correctly.”

I realize that Mockingbird and its trial and characters are fiction. I understand too, that it's a product of its time, perhaps helping to bend that proverbial moral arc of the universe towards justice.

But, I’m tired of reading for pain and problems without healing and solutions. I guess, in 2020, I just don’t think bending, nudging, or trying is really enough.

The Role of Mockingbird

This spring, I wrestled with my feelings about the novel. I wondered if my approach really mirrored my beliefs as a teacher.

If I believe the texts I choose for my students are merely the vehicles to help me support their growth as readers, writers, critical thinkers, and communicators, then why did I choose Mockingbird? If district curriculum mandates I teach it, then why am I teaching it this way?

I’m not calling for literary censorship or removing the n-word. However, I worry about what that language does to my Black student, who sees people like him murdered on social media. I don’t want to shield students from difficult topics, but it’s concerning to see students giggling at rape way fourteen-year-old boys often do, hiding discomfort behind bravado.

So while I don’t think we need to kill Mockingbird, I do think teachers need to be intentional if they want to teach texts with this kind of richly problematic material. Click To Tweet

Just one of the central conflicts (rape, domestic violence, racial terrorism, classism, sexism, racism, language) needs an entire week devoted to discussion. But, any teacher who has spent more than a day in a classroom knows, there just isn’t time. If we want to read the whole text, keep students engaged, and hit all the standards, those deeper discussions fall by the wayside.

A few years ago, our freshman ELA team decided to use Facing History's To Kill a Mockingbird during our unit, which was a great step toward critically looking at the text within its context. But again, I felt rushed to both read the full novel and dive into the resource.

I don’t teach freshman this year, so I will not be faced with Lee’s work, but to teach Mockingbird with my integrity, I’d need to reimagine how I teach it. I’d want to stop feeling rushed so we could actually engage in meaningful conversations. I could eliminate those moments in the text that I know make my students of color feel hopeless.

What if, instead of supplementing Mockingbird with texts like Facing History, I made Mockingbird the supplement; the literary touchstone to a more contemporary, relevant, and hopeful work.

, for example, is a powerful exploration of the criminal justice system and the myriad, pervasive injustices at the core of our country. It mirrors many of the same conflicts in Mockingbird, but with the immediacy of today. If my goal is to engage students in critical thinking, analysis, reading, and writing and to connect to their sense of humanity, I think Just Mercy

is much more effective than our canonical standby.

Stevenson writes about the painful truths of our current reality, but his dedicated activism is undeniably inspiring and hopeful. He focuses on our shared humanity and the power of empathy for change.

He explains, “Sometimes we’re fractured by the choices we make; sometimes we’re shattered by things we would never have chosen. But our brokenness is also the source of our common humanity, the basis for our shared search for comfort, meaning, and healing. Our shared vulnerability and imperfection nurtures and sustains our capacity for compassion.”

There is definitely brokenness in the characters in Mockingbird, by choice or by circumstance. Perhaps that is one of the reasons these characters have persisted for decades; we can see ourselves in Atticus’s moral dilemma, in Mayella’s pain, in Tom’s violent reality.

But, I’m more interested in that “common humanity” that Stevenson fights for. I’m ready for the Mockingbird where Tom isn’t convicted, where the town rallies behind Atticus, where Mayella goes off to college. At the very least, I want my students to see the possibility of those outcomes.

2020 has brought change, pain, loss, grief, and confusion on a scale I don’t think we ever could have imagined. I don’t need to add to that with the text we read.

Instead, I’d like to help my students understand the context of our history, critique and engage in reality, and imagine what they can do to shape our future. 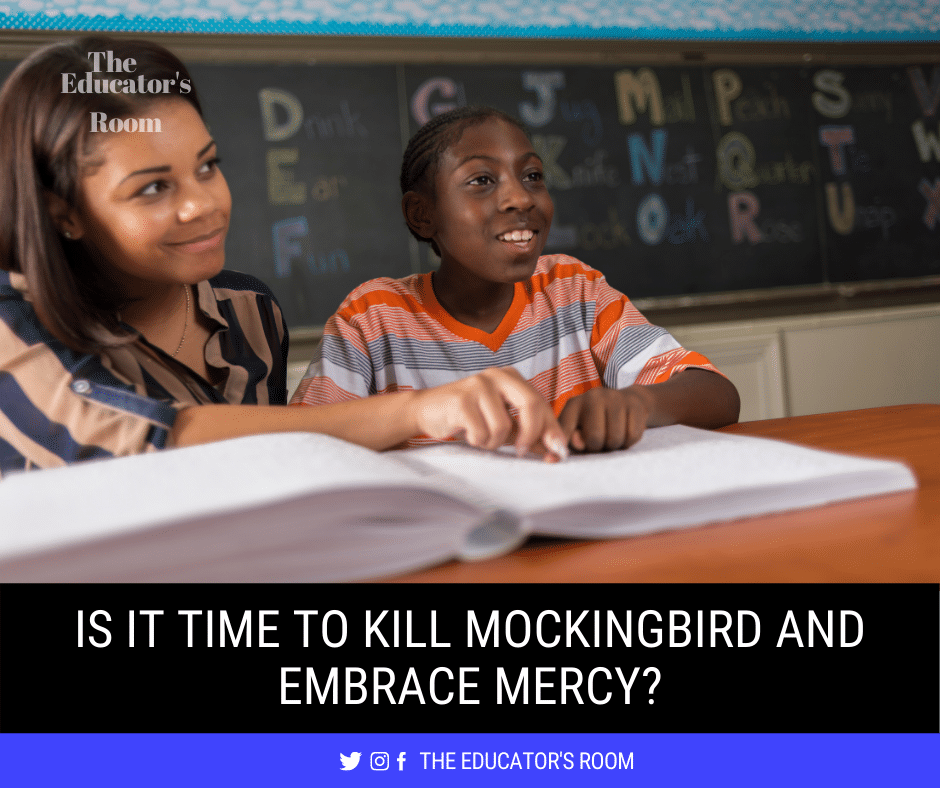 « The System is Broken But Are We Ready to Fix it?
Teachers Have Been Betrayed...Now is the Time to Vote »