Keeping Your Head Down? | The Educators Room

Today, a listicle came across my Facebook feed, asking people what the worst piece of career advice they had ever received was. They ranged from the well-intentioned and seemingly sensible, to the outright insane. It made me think, What would mine be?

“Keep your head down.”

In all careers, I’m sure, but especially in teaching, we seem to be told to keep our heads down. Don’t make waves. Don’t draw attention. Don’t call people out. While it is absolutely true you should choose your battles and recognize that not everything is a real problem or need, there are times when we should not be afraid to speak up.

I started my teaching career as an English as a Second Language Aide. I was 22 and had no idea what I was doing. I worked with a fantastic staff who supported me as I learned and gave me space to grow. I was lucky.

Then, one day, this substitute came in. I was assisting in a math class he was teaching that day. I stood next to him at the front of the room after the lesson, looking for those tell-tale looks of confusion on my scattered charges’ faces, when he says, “Why are there so many Mexicans here?”

I think I said something about how people, in general, tend to move to where their families are, so many of our newcomers had done that. A poorly phrased question, I told myself. Nothing more.

Why all of these people were taking up space in classrooms or taking jobs. Click To TweetI tried to come up with responses that both shut him up and made it seem like I was keeping my head down.

Then, he said it. “How many of these kids are illegals?”

This was 2008, before we had any kind of script for this conversation. This was not a topic on the internet or for the (all too rare) multicultural education professional development sessions. I was looking at the students when he said this, and I saw several faces glance up, at least one with a face of abject terror.

It was time to stop keeping my head down. I don’t remember exactly what I said, but it was something along the lines of, “I don’t know, and I don’t care. They are children, and I am here to teach them.”

He looked flabbergasted and fell quiet. I thought that was the end of it, but then he said something along the lines of, “I don’t tend to care for the Jews.”

I just walked off and helped my students at that point, and then I reported the conversation to the office.

Weeks later, I walked into my ESL classroom--and there he was. He was substituting for my second language students. Now, I don’t know what this guy’s deal was. Not only did he not remember me, but he would not believe that I was the aide for the classroom. He first insisted that I was an eighth-grader, then that I was a high school volunteer, and would not believe my badge was real. I finally agreed that I “was” a high school volunteer, just to get him to stop.

The day went on, and we had our in-class reading session. My students did a stellar job. Some were mostly fluent by this point, while others had been in the country for less than a year.

“Some of you don’t read good at all.” Yes. Read good. I cut him off and told the kids what a great job they had done that day. Then, I returned to the office and reported him again.

I never saw him back in a classroom at our school.

I was lucky that I worked in an environment where I felt safe enough to not keep my head down. It made me feel like that was an option in the future as well. Admittedly, I did not always practice what I am currently preaching. No one does the right thing all the time, especially if you’re in a place where keeping your head down could equal keeping your job.

Keeping your head down is good advice to a point. But, at the end of the day, we need to sometimes not just put our heads up, but stick our necks out. For our kids, for us, for what is right. 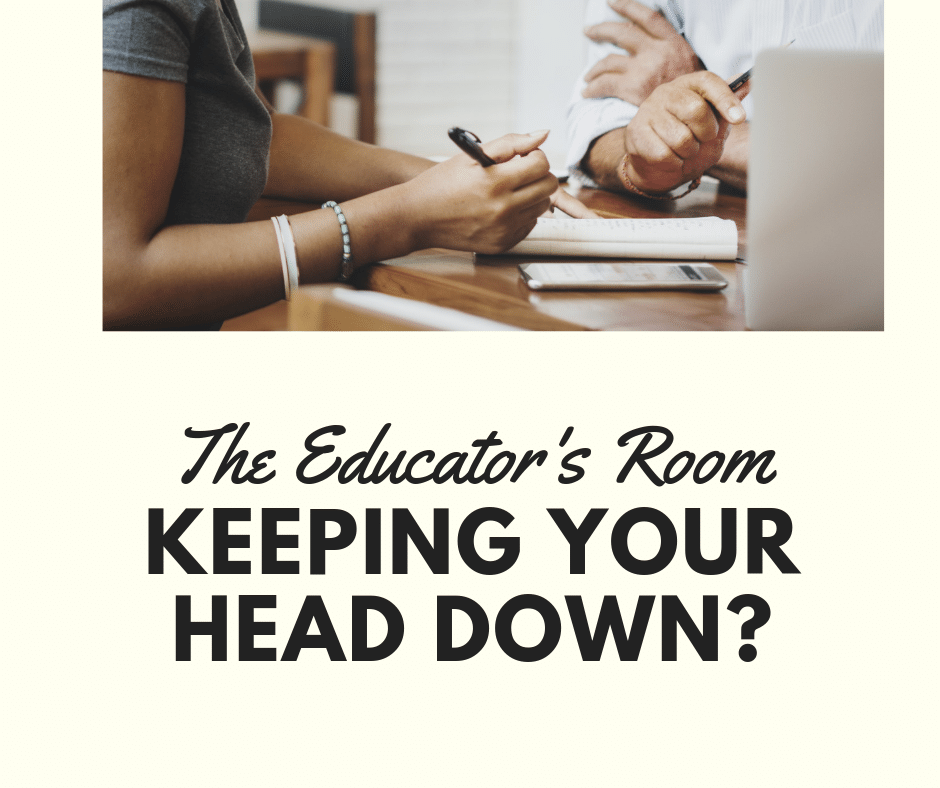 « Professional Development Reflections: Embracing the Margins
The State of the Demoralized Teacher »