On the Topic of Erasing History: Racist Monuments | The Educators Room Skip to content
Previous Next

On the Topic of Erasing History: Racist Monuments

As many in our nation call for the removal of confederate monuments in public spaces, there is a loud opposing side saying that to do so would be to erase history. As a high school history teacher who has focused much of her own time and education on the intersection of race, gender, class, and sexuality in our history, I want to set the record straight.

First, the monument conversation goes beyond just confederate monuments: there are statues of Christopher Columbus, Thomas Jefferson, and other “leaders” that have been targeted for removal as well. The issue with these monuments is that they are not being framed as a memorial to the Native American genocide and lives lost, or the crushing generational poverty and mistreatment inflicted on enslaved families even after freedom. Instead, these statues have been framed as a way to glorify the person they are carved to represent, and to many they represent one thing: racism. By the way, they aren’t wrong.

In 2019, the Southern Poverty Law Center released an infographic depicting a timeline of when confederate monuments were erected. If you take a look, you will notice these statues were not erected during or even in the years shortly following the Civil War. In fact, you will notice there is something far more sinister and political at play here. There are two large resurgence periods of confederate statues being put up in public spaces: one starting in 1900, and the other during the Civil Rights Movement.

From a historical perspective, the period of time from 1900 and through WWI was a time when racial tensions were incredibly high with events like the race riots in Atlanta, Georgia and Springfield, Illinois in 1906 and 1908 respectively, the Red Summer of 1919, and the Tulsa Race Riots in 1921, among countless others. In fact, that period of time is considered part of the nadir of American race relations – which was when racism was the worst in the history of our country. It is no coincidence that monuments glorifying racist, slave-owning leaders from the losing side of the Civil War would see a spike in construction. It was a statement to the people of color in our nation, and it was happening concurrently with the second wave of KKK membership (who, by the way, were created as a result of the Civil War). I think it is quite obvious then, why the Civil Rights Movement also saw a similar boost in the creation of more Confederate monuments.

On the topic of these monuments, intent absolutely matters. As I previously stated, these monuments are not seeking to inform or educate citizens of the atrocities committed by the people they display, they have been used to show off their “drive” and “leadership” and “genius.” Should we really be focusing on people with incredible motivation to do absolutely devastating and grotesque things in our nation’s history? Consider this: would you find it odd if there were statues of Hitler littered across Germany celebrating his incredible charisma and ambition to expand the German empire? Would it really be that much better if there was a proud statue of Hitler, but the plaque just told you how he was a really bad guy?

Consider this: would you find it odd if there were statues of Hitler littered across Germany celebrating his incredible charisma and ambition to expand the German empire? Click To Tweet

This is a conversation that is much larger than some carved stone in the park across the street. This is a conversation about what we as citizens want to celebrate in our country’s history, and how we can effectively inform people about the unsavory parts. To remove these monuments is not to erase history – I cannot tell you how many times I have seen and heard confederate leaders taught about in a classroom when no one in the room has heard of the real reason for the failure of Reconstruction or race massacres of the early 1900s. Or, how many students can tell me Columbus discovered America, but don’t believe me when I say the Viking actually visited first, and by the way, Columbus is responsible for an unfathomable genocide on Native American peoples who had always been here. If we want to talk about erasing history, then let’s talk about – I just don’t think you are ready to have this conversation.

The textbooks in our schools have been erasing history since public education was legislated, and state content standards have done no better for decades. Slavery is taught as a mistake made in the past with an “everyone was doing it” justification. Meanwhile, American slavery was quite unique because it was rooted in the justification by way of racial superiority, therefore condemning generations of people to slavery simply for how they looked, rather than a debt to eventually be paid off or a social class you can eventually climb out of. The textbooks do not educate students on the destructive effects the institution of slavery had on African American people, and sometimes barely even discuss the Jim Crow era. I, as a history teacher, have read passages from multiple books that take the intertwined and tragic nature of triangular trade and boil it down to “people exchange goods and services across the Atlantic Ocean for the first time and it was great for the economy!” Real history has been erased and suppressed from our world for far longer than anyone is willing to admit.

American slavery was quite unique because it was rooted in the justification by way of racial superiority, therefore condemning generations of people to slavery simply for how they looked, rather than a debt to eventually be paid off or a social… Click To Tweet

I want to look at the solutions to our problem of erasing history.

One, I think there needs to be a huge overhaul of textbooks and content standards in the country to make sure we are representing history fairly, accurately, and not sugar-coating the people or events they cover. There should be more time made for minority and women voices and experiences in the curriculum besides a quick sentence saying “and then they could vote!” Let’s change the way we frame our history from “and then they could vote” to “and then the people in power who had denied them their rights for so long were finally forced to give them the rights their constitution supposedly guaranteed.”

Second, racist monuments need to come down. Put them in a museum if you wish, because that is the only place besides the foundry that they could possibly belong. Put in their place monuments and plaques that tell us what really happened, and don’t suppress the dark pieces of the puzzle. Let’s stop erasing our history, and let’s start facing it. 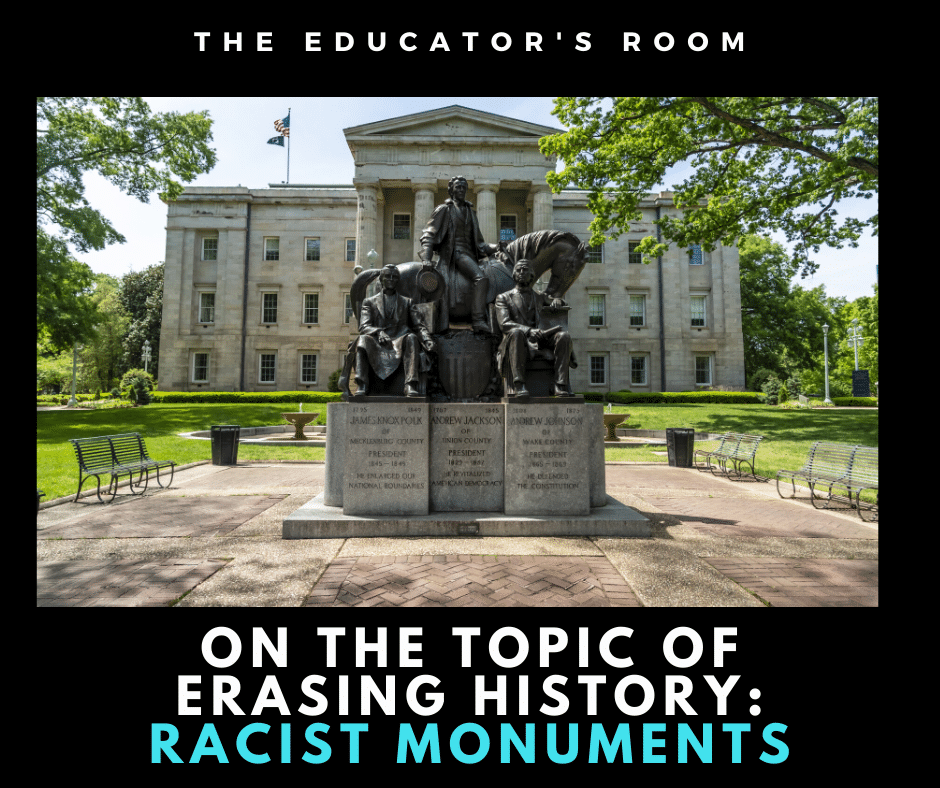 About the Author: Madison Woodward