Return to Panem:Teaching Possibilities with The Ballad of Songbirds and Snakes | The Educators Room Skip to content
Previous Next

Return to Panem:Teaching Possibilities with The Ballad of Songbirds and Snakes

When the original Hunger Games series was released, with its conclusion published in 2010, I was busy teaching 8th grade English at a suburban/rural middle school in Tennessee. I immediately saw possibilities in the book and was encouraged by a colleague’s work with the first novel at another middle school.

I began using the first novel in the series in 2010, and then moved to the second novel in 2012 and included the third novel in my teaching in the 2014-2015 academic year. In my routines, I used the novels as whole group texts at times for class-wide novels, and, at other times, I included them as choice reads for small book club groups. Teaching with this text was not without controversy. These days, given the rise of school violence, I would likely approach any of these titles with an even greater delicacy than I did in the early 2010s.

Of course, there is a new book in the series now on the market, the just-released prequel, The Ballad of Songbirds, and Snakes. In this article, I offer up a few threads of how I might use this new book as a classroom text, and I give a nod to the many students who went on a literary journey with me through the original series. Reading this new book has been both nostalgic and emotional as I remember those days, conversations, and lessons.

Reflecting on the titles that came before, I have noted that the first two books in particular as a brief entrée before leading the reader into the constructs that the designers of deadly worlds put together for the last two-thirds of each entry. In the series conclusion, Mockingjay, the concept of the game-scape is exploded as the real ethos of the fictional society is exposed in a whole-scale war.

The last entry of the series was, of course, made into a two-part film (because that was the thing to do at the time), and treated readers to new characters, expanded possibilities with ideas about propaganda, and tied up the narratives of the original members of the love triangle that the story established.

But what of the new book? I see a few possible steps to take.

If the underlying question of the original series was centered on how to escape the confines of deadly whim in an entertainment-driven culture that no longer values human life, including the harming of children in an effort to frighten and suppress the population, then the line of inquiry that Ballad opens up is: How did events come to be so bad? Better yet: How do we, as a society, continue to sit back and allow terrible events to occur – and do nothing?

It’s a relevant question, given the tempestuous race relations, sexism, and abuses of power that occur in our age. The older I get, the more I realize that we are farther away from the progress that I used to imagine. In the mirror of a fantasy or science fiction novel, including dystopian works, we ask: How far are we from this ideology, really? It is often in a brief moment we glimpse our own world.

It’s a moment to take students to real-life and news, both now and in the past, to remind them about what’s worth noticing and what we dare not repeat. Click To Tweet

If the question of the global issues in the book don’t provide enough of a lesson trajectory, we can locate in the main character of Ballad a set of essential questions to trace. Suzanne Collins, the author of both the original series and this new entry, could have chosen anyone to make the central focus of the book. The character this author chose is the man who serves as (one?) of the villains in the original series.

It’s a move not unlike focusing on the fall of Anakin the Star Wars prequels, except, in this case, Collins pays attention to the demands of technology and helps us see that the society did improve in their tools. Coriolanus Snow’s role as a character leads to a number of possibilities, from tracing his fall to capturing key moments of his formation, to the possibility of an argument for him as an antihero. He is a character I found myself unexpectedly liking at moments and disliking at other times in the story. Simply tracing these “author moves” in terms of characterization is interesting work.

These are all difficult questions, politically and ideologically, to wrestle with, and the book series all the more lends itself not just to an English course, but as a supplemental read for social studies and government discussions. There’s much to explore.

I conclude this stroll down the dystopian lane by calling attention to a literacy practice I never considered before: How does an educator’s discussion with former students continue as they encounter new works in a series that served as a textual space for conversation and daily life in the classroom? I hope that other teachers meet more than withered ends as they pursue this kind of practice.

Because of the affordances of social media, I’ve had the good fortune to keep in touch with a number of students from my time as a middle school teacher who now illustrates the growth of gray hair in my beard by posting their own collegiate and post-post-secondary pursuits in education and life. Yes, teaching helps us be mindful of our age, and our work in the classroom doesn’t stop at the door, or even at the end of year.

What I have discovered is those old discussions, even now after almost a decade, are as beautiful to revisit as they were when I was teaching the first series. It’s a testament to the invitational nature of a thoughtful author and a powerful book series, as well as to students who are still willing to keep the conversation going after graduation.

I’ll volunteer as a tribute for that kind of literacy practice any day.

Jason D. DeHart is an assistant professor of reading education at Appalachian
State University. DeHart’s research interests include multimodal literacy,
including film and graphic novels, and literacy instruction with adolescents. His
work has recently appeared in SIGNAL Journal, English Journal, and The Social
Studies 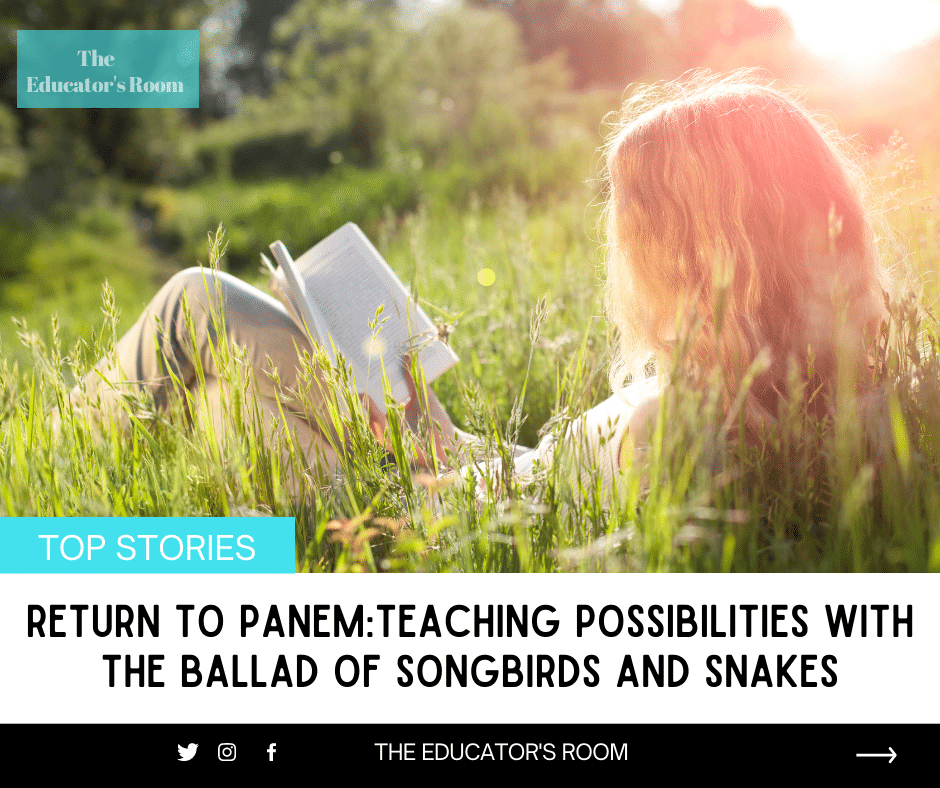