The Importance of Visibility for Queer Educators

In a gentle way, you can shake the world. ~Mahatma Gandhi

On June 15, 2020, something happened that most of us in the LGBTQ community never thought we would see in our lifetime: the Supreme Court ruled gender identity and sexual orientation are protected characteristics under the Civil Rights Act.  As educators, we can no longer be denied a job or fired because of who we are or who were born to love. (Unless we work in a religious school, that is.) We have much to celebrate!

And after we celebrate, it’s time for the real work to begin in our classrooms. Perhaps, like me, you work in a conservative state where “don’t ask, don’t tell” has been your modus operandi because employment non-discrimination protections did not exist for you. You may have even been closeted at work for years. Regardless of past circumstances, now is the time for us to start living out and proud at school, not just because we can legally do so but because our students’ lives depend on it.

In a 2019 study, The Trevor Project found that more than 1.8 million LGBTQ youth between the ages of 13-24 seriously consider suicide each year.  LGBTQ teens are more than twice as likely to feel suicidal and over four times more likely to attempt suicide than their heterosexual peers. According to the 2015 national Youth Risk Behavior Survey, 34% of LGBTQ students were bullied on school property, 28% were bullied electronically, and 10% were threatened or injured with a weapon on school property.

I know you don’t need these statistics.  You are already keenly aware because you have seen these things happen to your students.  Maybe some part of you worries it may happen to you, too. Or maybe these numbers are painful reminders of your own childhood, eliciting memories of playground bullies and name-calling (or worse.) I wish I could give the broken, 12-year-old you a hug and tell you it gets better because it does.  And it will continue to get better for all of us if we are brave enough to be ourselves.

You may be afraid to come out.  I was, too.  A few years ago I was teaching in a conservative area and though I was out to friends and family, I was deeply closeted at work. I was certain I would be fired if anyone found out I was gay, as there were no protections for me in my state or district.

Everything changed when I met Ty, an administrator in my district, through a mutual friend.  He was gay and living openly with his partner, also a district employee.  I told him how badly I wanted to come out but how frightened I was, and without hesitation, he assured me, “It’s safe to be yourself here.”  Because I was in so much pain from living a double life, I had no choice but to believe him and finally tiptoed out of the closet at work.

Guess what? Ty was right…it was a non-issue. What’s more, the walls that had previously existed between me and my students because of the secrets I was keeping came down, and we were able to develop more honest relationships based on mutual trust. The years since have been some of the most fulfilling of my teaching career.

Today I feel a deep sense of gratitude for Ty. By being comfortable in his own skin at work, he made it easier for me to be myself.  He changed my life and my teaching practice in profound ways with his courage, and I know he has done the same for the many teachers, administrators, and students with whom he has worked over the years.

As an LGBTQ community, we have fought for our rights for so long.  We have felt the anguish of events like Stonewall and we have basked in the joy of the 2015 Supreme Court ruling that (finally) made marriage equality the law of the land.  Now we have an opportunity to begin healing some of the pain of our past. Telling your story—being fully human in your classroom—is an act of healing. By freeing yourself from the bondage of silence you are also freeing all of your students and all of those queer folks who will come after you.

I’m not asking you to start a Gay-Straight Alliance and paint a rainbow mural on your wall (though how fabulous would that be!)  By simply being out at school, your LGBTQ students will know that it is okay to be themselves.  Then perhaps your other students will begin to see the dignity and worth of their LGBTQ classmates—and in turn, the dignity and worth of all people— whether they look, live, or believe the same way.  And this, my friends, is how we change the world.  Not by teaching English or math, but by teaching our students radical love and acceptance- of themselves and others. 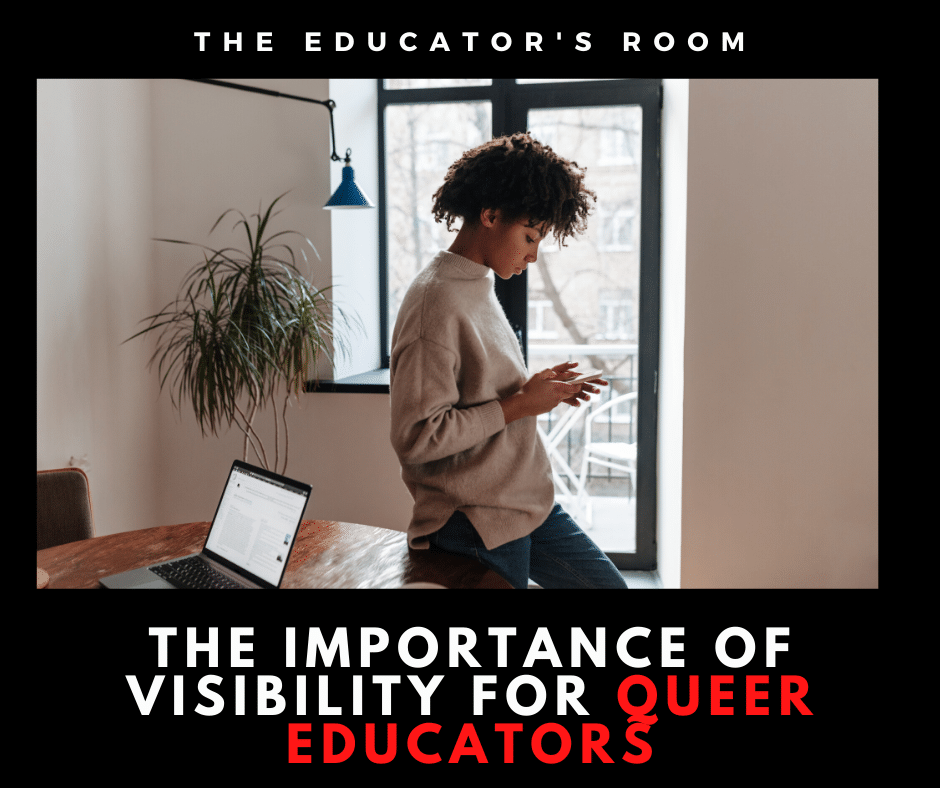