If there is one topic that educators don't want to talk about, it is educator sexual misconduct. It is disturbing and disgusting to think that individuals who are hired to help, encourage, and teach students would think to do anything so profane. In fact, it makes me sick to my stomach just writing about this. That said, if there's one topic that educators should be talking about, it is this.

There are two reasons for learning how to deal with this totally traumatic circumstance before it happens in your school:

If you suspect that there is educator sexual misconduct, then you are at a personal and professional cross-roads for these two reasons above. The ramifications of action - or inaction - couldn't be a bigger cross to bear. However, let's examine a five items as you consider an educator involved in sexual misconduct:

1. What is causing you to suspect sexual misconduct?
It's awful to admit, but I've been on the outside-looking-in on for 3 cases of suspected sexual misconduct. In one case, the student and teacher were almost inseparable. The student continually sought a pass to go to the teachers room, and, for whatever reason I don't know, teachers were happy to provide the pass. In another circumstance, a teacher became focused very much on their body and showcasing it to the students and staff, almost provocatively. Lastly, I know of another circumstance where a young teacher was throwing parties and students were supposedly attending them. All of these situations sounded an alarm in their own respective way.

2. What changes have occurred in the student's or educator's life?
In many cases, there's trouble brewing at home. In the student's life, it could be that they feel neglected or unsupported, so they turn to the responsible adults they're supposed to have in their lives - the teachers. In 99+% of cases, this is our modus operandi - we are there for students. But in certain situations, some people - it doesn't matter what the profession, but in this case, we'll focus on teachers - will take advantage of the "lost puppy" in their midst.

3. What facts do you have?
While these above premonitions are eye-raising, one needs to collect the facts before moving forward an indictment. Facts need to be quantifiable and supported by more than just your observations. While you might have an odd-feeling about it in your stomach, it very well could be (and hopefully is) just a misunderstanding. However, feel free to collect facts to support or negate your supposition. Ask plenty of questions. Analyze your data. Ask yourself if they're simply different in your pedagogy than you or, or if you feel they're operating out of the scope of the profession.

4. What sources do you have?
If students are discussing this as a topic, that's one thing. However, the more students there are talking about it (and, as a teacher, you certainly know it's difficult to turn away the trustworthy ones), the more difficult it becomes to ignore. If parents or teachers also are suspect, that should also cause the concern to rise. Most of all, if the student in question or one of his/ her friends reports something to you, know that you are legally obligated under the updated Every Student Succeeds Act (ESSA) to report this to your higher-level authorities.

5. What plan of action do you have from here?
For many of us, the investigation will end without any consequence. Some of the time, we just have an awkward feeling in our stomach about a certain teacher. There are people who we don't get along with, find attach themselves too closely to students, and just operate under a different set of parameters than we're comfortable with.

However, in other circumstances, this is a legitimate concern. If your facts and sources corroborate your initial thought of educator sexual misconduct, then you are morally and legally compelled to report this to your supervisor. If your supervisor is the one in question, then you need to move up to their supervisor. While you might be placing yourself in a completely uncomfortable position - a friend of mine who had to report this once was eventually placed on the stand at a friend and colleague's trial - if education is truly about the students, then our actions need to match our words. That rings true all the time, but most especially when it comes to their personal well-being and health.

There truly is no bigger gorilla in the room than supposed educator sexual misconduct. I'm sure reading about this is just as unsettling as it was for me to write about it. May you never have to deal with it in your entire, long, and fruitful career. But, in case you do, hopefully you're equipped to do the right thing. 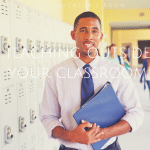 Teaching Outside Your Classroom 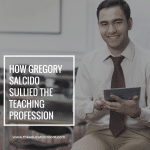 Staying Within Law: Special Education Teachers and IDEA
« [Podcast S2E6] Are My First Amendment Rights Coming in Second?
Have You Used Play-Doh In Your Middle School Classroom? »