The City of Detroit declared bankruptcy earlier this week. Now $18 billion in debt, the 700,000 residents who remain in "The Motor City" are, on average, burdened with more than $25,000 debt per capita even though a full 35% of the city now lives below the poverty line. A federal judge halted the bankruptcy ruling on Wednesday, July 24th, and all eyes - both in Michigan and across the nation - await to see what happens next.

Educational Impact: Cash-strapped cities and states across the nation are watching this case with fervor. For over 40 years, residents have been leaving the city, and thus, lowering its tax base.  The fewer the residents, the less able they were to carry the tax burdens a city the size of Detroit carries.  While the bankruptcy does not affect education funding directly, Michigan already deals with lowered education resources.  The collapsing infrastructure of the largest city in U.S. history to declare bankruptcy will not help the education system.  The children who need the resources, the teachers who must work without those resources, and a city that can't provide what its residents need are all victims of this bankruptcy.  What the practical effects of this action will be may not be known for months.  One thing is for sure: as students and teachers head back to school in Detroit, they will face even more challenges than ever.

A Dream Followed: 5 Burning Questions About Running Your Own School 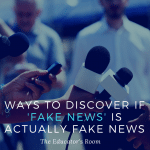 Ways To Discover if 'Fake News' is Actually Fake News