In President Donald Trump's Inaugural Address, these were his first official words about American public education. While it's all too easy to jest that President Trump could have been possibly referring to his Education Secretary choice Betsy DeVos (who has donated $5.3 million to campaigns in the last 5 years yet still can't differentiate between proficiency and growth), it is a jab at "our failing education system."

The American compulsory public education system, which will celebrate its 100th anniversary in 2018, is facing its greatest challenge ever: this current administration.

EXPLORING OTHER PRESIDENT'S AND EDUCATION

Now, teachers, before you ready your torches and pitchforks and head to the Lyndon B. Johnson Dept. of Education Building, let's examine what the previous 5 Presidents said in their Inaugural Addresses about education:

We'll note that much of the rhetoric here touches on what seems to be a notice of "failing schools," but a hope to bounce them out. Change the future. Upgrade students' lives.

President Trump is not void of this promise. In the same address, he declares that "Americans want great schools for their children, safe neighborhoods for their families, and good jobs for themselves. These are the just and reasonable demands of a righteous public." Which is -- just and reasonable.

It's just that he alienated those of us already involved in the system much sooner than his predecessors.

Which we must first comes to grips with. I have been let down by all of these Presidents in some form or another. President Obama added Arne Duncan to his administration, thus teaching me what it's like to see the federal government overstep its boundaries by requiring schools to do the federal government dance. President Bush of course passed his landmark No Child Left Behind, which has changed the landscape of education almost as much as any legislation. President Clinton, Bush, and Reagan all operated their administration in their own ways in a post-Nation In Crisis ways as well, prompting change for the better, but hardly getting anywhere.

Mostly, the moral to the story is that we (teachers, students, and community members alike) have been let down by Presidents and their Education Chiefs regardless of their political party.

Which is what one can also argue about our education system being "flush with cash." The United States spends about $12,000 per student on education (5th most in the world), and yet has an 81% graduation rate. That is distressing and bothers everyone, from the POTUS through each of the 3 million American teachers.

Granted the spending is high, but it's safe to say that the United States is also one of the wealthiest nations (we rank 18th on per capita income, with the countries ahead of us mostly tiny, wealthy kingdoms). When it comes down to a measure of GDP spent on education, the United States spends approximately 5.5% of its GDP on education, ranking us at 56th in the world, right between the United Kingdom and Austria.

What is the starkest difference between us and these other nations that spend more is that we are the wealthiest nation in the world (yay!) but also the most income unequal (uh oh!). In the past, education used to be the great equalizer, causing many economists to ponder the idea that the "American Dream" might be dead.

The US spends approximately 5.5% of its GDP on education, ranking us at 56th in the world Click To Tweet

More than that, our schools are hardly representative of being "flush with cash." While a nearby State Senator decided to fly over my school in a helicopter and declare that schools were "not underfunded" because of what he saw as superfluous spending, we've also been growing our district at a roughly 5% increase in students each year. When we ask the school board for a 3% raise, they laugh at us -- because the money is not there.

And while I face this problem in a relatively upper-middle-class school district, other school districts across the nation face a multitude of issues when it comes to staffing, buildings, technology, and more. The teachers and students are highlighting it for the President on Twitter #FlushWithCash (click on the link and scroll through the photos -- you won't be disappointed).

"DEPRIVED OF ALL KNOWLEDGE"

Thank you, President Trump, for allowing me to create a lesson on hyperbole. Look, I get that we're behind the other countries of the world when it comes to the PISA scores. We're in the top 25 in math and language arts, and that's not acceptable. I get it, and I'm trying to correct it. Despite the "hate affair" with teachers, their unions, and public schools, other concerned citizens and educators are trying to correct that, too. But you aren't improving it by jettisoning teachers from the profession.

And let's be frank with ourselves. There's plenty of room to grow with the PISA. That's why 100's of educators and policy directors from around the world signed this letter demanding these standardized test comparisons be altered for a variety of reasons. Plus, the skills that American employers covet - most among them creativity and problem-solving - are actually being fostered by American schools better than any other country in the world. So, while we're having difficulties playing Little Bo Peep with our K-12 sheep, they're doing better than most thinking about the world they live in.

I highly doubt my students, our students, and our posterity have been deprived of "all" (that being 100% of) knowledge. More than we'd like, yes. But not at all "all."

The future of American education has plenty to learn and grow. PLENTY. But so does our President and his administration. While most of us appreciate the idea of a "shake-up," especially in education policy, that should not equate a shakedown - beginning with such dishonest labeling. Should they want to include educators on this growth, we'd be glad to pitch in and help out. That's what educators do best. But we're tire of being ignored, stepped on, and tossed into the wind with such eviscerating words. In the meantime, we'll do our best with what we got - that's also something we do quite well, too. Charter Schools Have Lost Their Way 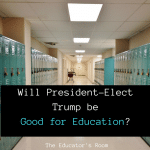 Will President-Elect Trump be Good for Education?
« Using Banned Books to Teach Resistance
Teaching a New Generation: Changing the World in a Changing World »