Last night, in an upset many did not see coming, reality show star, Donald Trump was announced President-Elect of the United States. As I stared at the screen, I initially was too shocked to even react. In the polls leading up to the election, it was clear that he was "gaining ground" but to see him elected to the "highest office in the land" shocked me the core as not only an educator, but also as a mother of a son of color, and as a citizen of The United States .

My initial shock disappeared and immediately turned to fear as I thought about how to discuss this with the teachers I work with and the students they serve. As my mind raced, I immediately through  discussions that would need to take place this morning in many schools across our great nation and how teachers will explain these events to our most vulnerable (students of color, LGBT, female, etc.) students .

As I clarified my thoughts and resolved to "move on", I realized teachers need to know not only how can discuss the results of the election, but they also needed a way to discuss the issues in the election that so blatantly divide us.

Depending on the grade level, school, and students teachers this morning may have to:

While these are all difficult conversations to have, it's important for teachers to be transparent and open to allow students to discuss their feelings-if they feel the need. Some of your students may be silent, while others eager to talk- all depending on the grade level, area, and school you teach at. However they may feel, teachers have the ability to be the calming factor in the chaos happening in our country.

Despite our country being so bitterly at odds with one another, it's important to allow discussion because that's where healing starts. Allow those students to write, discuss, and vent their feelings all while understanding that our place is not to change opinion, but to offer reason and life for students who are having difficulty understanding what's happening to them.

The health of a democratic society may be measured by the quality of functions performed by private citizens. Click To Tweet

Specifically, teachers can start today with this quote about democracy," The health of a democratic society may be measured by the quality of functions performed by private citizens." Let students know that the world is not ending if their candidate did not win, but we do need them to be a viable part of the democratic practice and that starts with learning about the issues (race, immigration, jobs, etc.)  that are on the tongues of so many Americans.

The beginning about learning about the issues starts with getting students to understand that every issue in the 2016 Presidential Election is complex and has many sides and caveats. This starts with showing students how to look at issues through informed eyes. Which can start with teachers using:

Next, allow students time to discuss their findings focused around the evidence they have to support their feelings. This is crucial when allowing students to discuss controversial issues- especially with our older students. While we may feel strongly about our new President Elect or the former Democratic Nominee, it's important for students to be able to have civil discussions and leave feeling hope instead of hopelessness.

Finally, it's important for us as educators to understand that not all issues will affect us how they will affect students. I have witnessed teachers dismissing the hurt people feel about this elections as people "crying" and being "babies"- as teachers we have to remember the most important people in our classrooms are our students. If we teach in a high needs, poverty school more than likely our kids have already formed opinions about the election and the issues surrounding the debates. Ignoring how our students feel does not make them feel better. Telling them to just "work hard" and to not want "handouts" is insensitive and invalidates our our students feel-whether they're happy about our new President-Elect OR angry about him.

In the end, today is a new day and we have to the voices of reason, trust, and understanding as we deal with the aftermath of Election 2016.  Now tell us, did students want to discuss the election this morning? 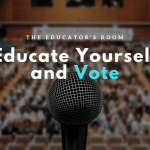 Educate Yourself and Vote

[Opinion] Barack Obama: A Role Model for Teachers and Students
« Have You Hugged a First Year Teacher Today?
What You Need to Know About Brain-Based Learning »