One of my friends approached me last week while at church. Now an administrator, he was a teacher who taught at Dover High School at the height of the 'intelligent design' debate, where a school board wanted it taught instead of the theory of evolution. He taught biology, nonetheless. In initiating the conversation, he said, “I don’t know how you do it. Not only are you unafraid to enter the firestorm of politics, but you actually know how to engage people – especially kids – in it.”

He certainly made my day.

However, I don’t think that I’m that different from the average teacher – or at least I shouldn’t be. That’s because all of us teachers should learn how to use our classrooms as ways to engage students in the political discussion.

Take Megan Phelps-Roper, for example. Her TEDTalk "I grew up in the Westboro Baptist Church: here's why I left" is one of the most thought-provoking Talks I've heard in some time. She even states the power of engaging in respectful, educated debate, declaring, "As a member of Westboro Baptist Church, I became a fixture on picket lines across the country. The end of my picketing career and life as I knew it, came 20 years later, triggered in part by strangers on Twitter who showed me the power of engaging the other." Indeed, one of the most reviled groups in America lost a member because people didn't just poke holes in her arguments, but they asked questions and showed compassion.

In a previous article series, Jeremy Adams shared an article on "what it's like being a conservative teacher," especially in his native, liberal California. I shared a companion article on why education was deemed "the most liberal job in America." Our readers' responses after our articles were almost a universal, "HOW DARE YOU SPEAK OF POLITICS," like it was some taboo topic, an educational third rail. It seemed that Jeremy's and my simple engaging in the topic was to the detriment and deterrent to education, our students, and our profession.

The truth couldn't be further from that accusation. Indeed, John Lennon croons in "Strawberry Fields Forever":

"Living is easy with your eyes closed."

My eyes were certainly opened when I hosted a political debate at my school. There were 4 Republican gentlemen running for a State Senate seat, and, as the leader of our local union, I listened as the candidates took turns throwing jabs and crosses at the teachers in the schools, especially in their political engagement and defense of their rights of the association. It was painful to sit there and listen to it. So many other educators who sat in the audience felt similarly, but I reminded them that at least we were hearing their thoughts in public. And I was glad to provide them the forum to do so.

As union president, I remember a situation where an elementary teacher was having his students cut out heads of our very anti-education governor to paste on a political project. I couldn't help but laugh at the ridiculousness of the situation, thinking it not to be true -- but it was! When he was excoriated by the school district, waited until they departed the room and then shared an even worse denunciation: "This type of political engagement isn't just wrong, it's one that besmirches our profession and empowers those who politically hate teachers!" Thankfully he wised up.

An equal and alternative example is during our Junior Achievement Day with our 7th grade students. One of the instructors for the "My Brand" component was a township commissioner who is a true partisan politico of the opposing party of the aforementioned teacher. He used political billboards and flyers from only his party to show our students how his "friends" all ran for office. And when he talked about the offices they were running for, he said of the person in the opposing party running for Congress, "I don't remember his name. It doesn't matter anyway." I was infuriated to sit her and listen to him pontificate about his party to my students, and I printed off a list of all the candidates running for office, shared it with him, and reported him to the JA director. Thankfully he wised up, too.

But here's where we are when it comes to politics in schools. As teachers, our job isn't to share what we feel about politics; it should be how they think about politics. Indeed, the students who are in our classes did not choose to be there, so where do we have the right to choose to tell them what to think? Or what we think? When students ask who I vote for, I simply demure and remind them that's my personal business. My professional business is to ensure that one day they become informed voters.

Instead, we need to foster an environment that makes discussing politics not only a possibility, but a regularity. In doing this, we are creating an open forum for students to discuss and model proper communication for when they are out there in the real world. We're setting up a situation where they can not just participate in proper discourse, but to make sure it's fair in contrast to the situations outlined above.

We educators should ask ourselves, "How would we want our own children taught by someone in the opposite political party?" And that's how we should teach.

One way I ensure a proper forum for discussion is to teach students what it's like to be a "devil's advocate." When I find that groupthink is starting to emerge and most of the students are aligned in their thought, I'll pull out this card and openly assert I'm doing so. This forces me to be aware of all sides of a debate, and to acknowledge the flaws in not just others' arguments, but my own, too. Even on issues that I'm most passionate about, I have to concede that I don't have all the answers. I also have to acknowledge that I have my own biases, and when they affect what I'm teaching - for example, I've become a 1st Amendment zealot and I tend to not fully understand history's love affair with Andrew Jackson or John F. Kennedy - I note them to students. Loudly.

Acknowledging all sides of an issue forces us educators to be thinkers of free thought and not just repeaters of TV sound bytes. It forces us to form our own opinions and not just reverberate those of our favorite politicians or partisan media. And it provokes us to challenge our students to do the same, too.

PEOPLE WHO DON’T THINK LIKE YOU ARE NICE PEOPLE, TOO

My forefathers and mothers left Europe because they were persecuted for their religious beliefs. In the Germanic world, the Millers there were beaten and killed in the streets by the Catholic majority for being Lutheran. In Northern Ireland, my Scotch-Irish Protestant ancestors were in continual conflict with the Catholics on the Green Isle. The religious divide permeated so deeply that even my grandfather, upon meeting my college girlfriend for the first time, pulled me aside in private to say:

"She seems nice. However, you need to tell me one thing: she better not be a [expletive] Catholic."

She wasn't. She was Jewish.

Case in point, I teach a class this year that is the most religiously diverse of my career. In it, I have 11 sects of Christianity, including Mormons, Catholics, Protestants, and Evangelicals. There is a Sunni, Shia, and Wahhabi Muslim. Each of these Muslims are best friends with a Jewish student in the class. There is a Sikh. There are Hindus. There are Buddhists. There are atheists and agnostics. And in this class of 25 suburban, 7th grade Pennsylvanians, they look past their differences and remind themselves that there are good people sitting next to them, even if they believe in different gods.

So why should our politics be any different?

Indeed, I've had to admit to myself more than once that I can get carried away with the orthodoxy of my political beliefs. I'm not perfect. And I've had to apologize more than once. I'm unafraid to confront those who think differently than me, especially when I think it's in the light of their ignorance.

But when I step outside my own bubble and recognize my own biases and ignorance, the discourse becomes a bit easier. In fact, in light of the divisive 2016 election, I've learned more about the many sides of America and my own opinions by discussing politics with those who don't think like me than those who do. This includes my administrator friend who approached me. And I've become all the better for it.

Then again, I don’t think that I’m that special – or at least I shouldn’t be. That’s because all of us educators should learn how to use our classrooms as ways to engage students in the political discussion.

If it can work to bring people together despite the hatred touted by the Westboro Baptist Church, why can't it work in our classrooms? The future of our nation might depend upon educators running into the political fire and not away from it. 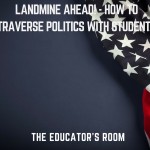 [Opinion] Barack Obama: A Role Model for Teachers and Students
« Six Books for Secondary Teachers on Teaching Students to Read
Budget Cuts? Don't Take It Out On The Teachers - Or The Students »