Candice Yamnitz is a teacher gone stay-at-home mom. While raising her children, she freelance writes and volunteer teaches.

The year I started guided math, I was in for a fun learning curve. Guided reading worked well in my classroom. I saw students making large strides and guided math was the new initiative. This was the year that I was going to jump into a more rigorous math class and more personalized teaching. I read Guided Math: A Framework for Mathematics Instruction by Laney Sammons. I got all my stations ready and I created my first lesson plans with my team. We created groups, planned the stations, practice work, entrance work and main lessons. We were ready for day 1.

I started with paperless entrance work. The students walked in and sat in on the floor while they solved a math problem with no paper or pencils. I called on a student to explain their thinking. Things were going well though the students were not used to doing math problems like this. I taught my lesson which went longer than the time I allocated. They did their practice work, but I failed to pull a group at this time. Then they worked in stations and I zipped through a small group without actually calmly sitting and guiding them through math problems. This wasn't exactly what I had in mind. My guided math binder for my notes was barely marked.

After a week, I knew that something had to change. I ran into some major pitfalls that I hope you can avoid. Avoid these to make it work:

Before using guided math, my lesson could go on for a substantial amount of time. Students practiced at the end and I would be readily available to provide support the entire time. Sometimes, I would get the class back together and reteach if everyone was making the same mistake. Using guided math, that was not the case. I needed to make sure I taught a lesson that was sweet, short and to the point. Students would get a short practice time with me available and then I was unavailable the rest of the class time. That means that they needed to be able to independently be able to complete the task with my 20-minute lesson.

My objectives were the ones in our curriculum. I realized that sometimes I needed to break up the objective into two days because students could not possibly reach the objective in such a short amount of time to independently practice it. This may seem like we won't achieve all our objectives. The truth was that my students learned each objective more deeply. When going on through the school year, students were able to achieve more because the base of what they learned was on a better foundation. Eventually, my class moved through the objectives more quickly.

Not Making the Stations into Lessons

I would have saved myself a lot of time and headaches if I just would have made new stations into the lesson for the day. Instead of just explaining a station with a short practice time, I should have made the station or game into an entire lesson. When I did do this, I made sure my station covered multiple objectives, was expandable and mastered by the students.  Stations need to change more often than in literacy because the units change and we want our students doing more as the year progresses.

Here are my go-to math stations:

My guided math binder would get put to the wayside at first because time was tight and students were moving to and fro fast. The whole purpose of guided math is to know the students' math ability better and to give them the special help they need. When I didn't note what transpired, I failed to know what to check on the next time. I also didn't know the last time I met with them. I should have been meeting with each student at least once a week. Taking good notes makes report cards that much easier too.

Not Checking More than One Objective

I realized that if I met with students through out the week, I still didn't know if they got the objective. I needed my guided groups to check the objectives from the week before and that day. It may seem like a lot, but it became easy to do after a while. I would make a single sheet of work from the previous week and I left a space for that day's work. This was the easiest way to make sure students were productively working and I got a good picture of how they understood the lesson. We discussed the main problem as a group.

Not being Flexible Enough

Guided reading groups are flexible, but don't need to be changed on a weekly basis. Math groups do need constant tweaking. The reason for this is because students may not get a lesson one day, but are rock stars the next day. It's just the nature of the subject. When I kept more rigid groups, students' levels were all over the place within the groups. I ended up just printing out lists for the week and posted who would meet with me each day. Students knew to look at the list posted on the wall.

Guiding math led to a class of more independent mathematicians and a deeper understanding of mathematical concepts. I knew my students' individual skills better and my lessons were more streamlined. Students got more time to play with numbers and concepts because all the activities were practiced over and over again through independent practice. There was the occasional lesson that needed to be long. The next day we would get right back to the guided math structure. 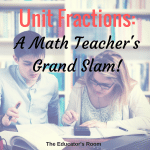 Unit Fractions: A Math Teacher's Grand Slam!
« Getting my Struggling Readers to Thrive in the Content Areas
The Many Personalities of Teachers-And Why We Need Them »