Yes, after spending time educating the refugees of Syria in their new homes in Iraq, Ms. Shourd decided to take a leisurely hike in Kurdistan with now-husband Shane Bauer and friend Josh Fattal. They were scooped up by the Iranian guard and made political prisoners. None of the three were given trial, and Shourd was released after 14 months, while the two men were kept a bit longer.

Now their story has been articulated in A Sliver of Light: Three Americans Imprisoned in Iran, their book on how they overcame unfathomable adversity in Iran’s prisons.

Today, Ms. Shourd is an advocate for ending solitary confinement. You can read more about her activism for her cause on her webpage, which features her writings on The Huffington Post, her theater work, and her prison visits.

Ms. Shourd took a break from her busy book tour to receive the distinction of #InspirationalEducator for the month of May.

Jake Miller, The Educator’s Room: Good afternoon Sarah! Thanks for taking time out of your schedule to share your story.

JM: Many of our readers might be curious as to what drives you: How did you get involved in education and social justice?

SS: My core values come from my mother, and [fusion_builder_container hundred_percent="yes" overflow="visible"][fusion_builder_row][fusion_builder_column type="1_1" background_position="left top" background_color="" border_size="" border_color="" border_style="solid" spacing="yes" background_image="" background_repeat="no-repeat" padding="" margin_top="0px" margin_bottom="0px" class="" id="" animation_type="" animation_speed="0.3" animation_direction="left" hide_on_mobile="no" center_content="no" min_height="none"][education and social justice] come naturally to me. My mother struggled a lot raising me alone, and she struggled economically.  That came together when I was in college as 9/11 occurred, and that outraged me; soon afterward I joined the anti-war movement to try to refocus our nation’s objectives and means at obtaining these two values.

There are so many teachers who have influenced me in such a positive way; my teachers at the humanities magnet school in LA totally pushed me to think for myself and not just give the answers they wanted to hear. They inspired me to do more, and I always had a strong connection with young people. So that’s how I was led into education.

JM: How did education take you to Syria?

SS: It was an extension of my anti-war work. I was frustrated because I didn’t feel I was having an effect, so I found a program that helped me apply what I learned in a more positive and meaningful way. I thought the most impact I could have is to work with those who have suffered the most through war. I found a job with the Iraqi Student Project to teach Syrian refugees.

JM: What is your most vivid memory of the day you were captured by the Iranian military?

SS: I remember when we woke up that morning, how beautiful and peaceful it was when I awoke. There was a spring near where we camped by the waterfall, and there was just this delicious, fresh spring water available for our consumption.

JM: You’ve detailed encounters with many different guards and prisoners while being detained. Which of them would you like to speak with or confront the most?

SS: Most of the guards were really harsh towards me, so I of course never want to speak with them again. There are some guards who were sympathetic and I think that they hated what they do. I would be interested in having a conversation with them without the power difference between us, but rather as human beings. I wonder if they just work there because it’s a job, or if there was some other reason.

JM: What helped give you hope while you were detained for 14 months?

SS: Knowing that I wasn’t forgotten. There was a whole campaign fighting for my release. It was hard for me to convince myself of that -- and to truly believe in it -- but I did know that I wouldn’t be forgotten and I was going to get out of there.

JM: How much of that time were you in solitary confinement?

JM: How did that change you?

SS: It’s not really known what solitary confinement does to a person’s brain or nervous system, but there are scientific studies that, say after 2 days, your brain moves towards stupor and delirium. I struggled with those issues, as I’ve always had to pull myself back to mental regularity. I’ve had to work hard to get back to normal, and I’m lucky in that regard. Not many people placed in solitary confinement are as fortunate, and they’re destroyed by it.

JM: What was it like when you were released and Josh and Shane were still kept in captivity?

SS: It was terrible when I found I was going to be released first. I protested and didn’t want to leave without them; however, I embraced it as a challenge to secure help and get them out sooner.

JM: Explain how your role as an educator and advocate for social justice has motivated you to your new goals of ending solitary confinement.

SS: These goals are really similar in way. As a writer and an advocate, I don’t preach to people. I didn’t do that to students either. I try to create a dialogue and a discussion. I want people to look more critically at what’s happening in prisons. Through writing, my goals is to educate people and to create more dialogue on what is occurring there. Teaching is very much the same.

JM: Is it strange to have your own Wikipedia entry detailing the events of your capture?

SS: It’s become the “new normal.” In the 3+ years since I was released, I’ve been used to having a very public story. So it was strange at first, but not so much anymore.

JM: Is it even stranger to see how popular A Sliver of Light, your book, has become?

JM: Yes, the online reviews keep racking up, as do the sales!

SS: That’s the best thing I’ve heard all day [laughs]. The tour for the book has been so constant, it’s hard to know the impact the book has had so far.

JM: Explain what life is like today. You’re married to Shane. Can you describe that?

SS: The way my life is when I’m not on book tour is that I’m working on my next project, Solitary Watch. For the last 6 months, I’ve been engaged with prisoners in solitary confinement, and I’ve developed deep bonds with those inmates who’ve had to suffer through it, too. It helps me make sense of my experience and vice versa. We as a whole have learned about these conditions, how to fight, and how to make our way back to the free world again. It’s important to me to have constant contact

Otherwise, much of my day is spent as a visiting scholar at UC: Berkeley, writing my play [“Theatre of the Oppressed”], answering letters and emails, and visiting and speaking with prisoners across the country.

JM: What do you think teachers can do to help promote your cause?

SS: I encourage them to speak about prisons. Have students critically engage in why we incarcerate so many people. Does it benefit society? Do the harsh punishments like solitary confinement help make our nation and community safer? How can we continue to incarcerate at such rapidly growing levels? The prison system has grown to a capacity that is unsustainable, and something has to give. Have students drive the dialogue.

Likewise, it’s important to have conversations with juveniles who’ve been caught up in the system – you know, those kids who think they’re destined for a life of crime more than a regular life.

JM: Thank you so much for your time. I wish you much success on your book tour, with your play, and your advocacy in general. Any closing thoughts for our readers? 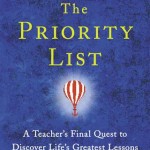 How to Apply for a DonorsChoose Grant (And Why You Should)
« Two Minutes to Peace
Gaming and Education: They are not Enemies [Part 3] »