I recently had lunch with my mentor teacher, Ellen Meyers. It was more of a super-extended lunch, because we sat and talked for almost four hours. That was something we never got to do when we were teaching next door to each other. That afternoon, we talked about our children and families, but mostly we talked about education. Not specific kids, but the philosophy and methods we believed in. It was a wonderful day.

Ellen Meyers was the second grade teacher of both of my own children. This was before I was teaching and I was a regular classroom volunteer. Later, when the stars aligned and I got a teaching job at that school, teaching second grade, I was thrilled to have Ellen next door. She took me under her wing and imparted her wisdom to me. I considered myself to be truly blessed.

I learned to look at what is developmentally appropriate for seven and eight year olds. For example, asking them to rewrite a story to correct their mistakes. They are simply too quick and too anal to make that happen without tricking them into it. They just crumble up the paper, convinced it wasn’t good enough, and start a new story, riddled with exactly they same sort of errors. Frequently, the process included crying. Why would you want to make them miserable? Ellen’s strategy was too give them “fancy” paper, colored notebook pages or lined stationary. She would tell them it was for the principal or some other important person. Every time I tried this, they took their time and made it something special. The hardest part was keeping them from embellishing it with hearts and rainbows.

Ellen believed every child would learn at his or her own pace. She decided what her lowest child needed to accomplish to be “finished” without letting the rest of the group know that was her minimum. She warned me about the lowest common denominator effect: the class will always slide to that place unless you made it clear that was too low. For the whiz bang students, there was always a project or interesting choice of work to do when they were done with their assignments before some people had barely put their name on their paper.

She said it sometimes felt like they learned in spite of all our errors as teachers. She wasn’t afraid to admit her errors, either. In fact, she laughed at herself. I can picture her shaking her head at herself, sighing and starting over. Her desk was never tidy and I learned the trick of hiding my junk in a large plastic bin before meetings, observations, or when I knew I was going to have a sub the next day. It was hardly the most organized technique but neither of us was super tidy. It didn’t seem important. We had too much teaching to do and didn’t stop to straighten up every few minutes.

Ellen had great class control without ever raising her voice. She treated all her children with respect. She was generous with her help to parents and co-workers. Yet, she wasn’t a push-over. She gave it to parents who didn’t get their child to school on time or at all.

By watching her, I learned to speak up when I didn’t agree with a policy. Ellen would calmly say at a meeting, “This is so age inappropriate. How do expect them to accomplish something they aren’t cognitively ready for?” I heard myself say this many times. She wasn’t afraid to tell the principal that the expectations being laid out was busy work and learning time wasn’t being used to the best advantage. She didn’t do this often, so when she spoke, she was generally listened to.

While she was an "older” teacher, meaning in her fifties, she was always willing to try something new. She was open to finding the best way to teach and listened to her peers, even if they were fresh out of college. I realized that there is always something to learn and a new way to make teaching fresh.

She loved thematic units. Ellen believed students would push themselves beyond their usual abilities to gather information about things that held their interest. They challenged themselves to be able to teach their classmates new facts. I witnessed this myself many times and it reinforced my hands-on and project-based strategy of teaching.

Ellen left at the end of my second year of teaching. I knew the other teachers I would be working with were more traditional in style. They liked textbooks and I knew from Ellen this wasn’t the best way I could reach my students. I was worried about it.

“You have to remember what is best for the kids. You have to stick to your guns and be a humanist.” She wasn’t talking religion. She was talking about treating each child as a spark, a human being.

Once, my principal scolded me for saying something she perceived as critical of one of my peers. I hadn’t meant it the way she took it, so I was feeling annoyed. I rarely got scolded and I found it appalling. “You are the new Ellen Meyers. You have to pay attention to what you say. Everyone listens to you.” While I was still miffed at the scolding, I was stunned by the high compliment. There was nothing I could have heard that would have made me happier or more honored.

Thank you, Ellen. I am so grateful I got to work with you. I couldn’t have gotten a better mentor, teacher, or friend.

Teacher Appreciation Week – TER Thanks You! 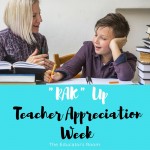 "RAK" Up Teacher Appreciation Week
« Gaming and Education: They are not Enemies [Part 3]
Collegiality is Our Best Professional Development »