One of the things that I loathe about my position is dealing with unhappy parents. One of my job duties concerns student discipline. I give out and schedules detentions for students. I also make phone calls to parents and inform them of detentions. During the day, I tell kids to stay in uniform and I go to classrooms when teachers have classroom management issues. It’s not a job I enjoy doing, but it is a job nonetheless that I must do. I wish all the kids were great and didn’t give me that kind of work to do. However, we have some repeat offenders that keep me busy.

Another aspect of my job is helping my principal with building transitions. We have a number of students moving from building to building. When I am asked to facilitate and monitor, I need all students to listen to me and follow directions. Last week when doing this, I pissed a kid off. He told his parent and the parent wanted to meet with me. No problem, but the parent works for the school.

Last week during a building transition, I organized our seniors to leave to cross the street. I announce a few rows in our lecture hall to leave. There was one kid who I told to sit down because he was walking with other students who were trying to be slick. These kids attempted to walk outside without me seeing them – mind you I told the other kids to sit down too. This one kid in particular started going back and forth with me He gave me attitude because he was pissed that I told him to sit down. He told his parent and the parent wanted to speak with me about it. This week, we met. The parent called the student down and the three of us sat in an office to discuss what happened. Long story short, the student admitted to having a smart mouth and going back and forth. But the parent couldn’t reconcile the fact that I told him to sit down if he was in the row I called to leave for across the street. I wasn’t sure whether or not he was in one of the rows I called, and there was too much confusion at the time for me to address it, so I told him to sit down. He said that he was in the row and I didn’t dispute that, I simply told him to sit.

The parent says that I called their son a liar by not letting him go across the street. I never said that. I told the boy to sit down and my entire point in doing so was to maintain my control over the room. I needed homeboy to listen to me and he didn’t. The parent wasn’t trying to hear me, although they backhandedly said they understood my position. The parent says that the boy had a serious issue with this because I made a big deal of it… Yeah I made a deal of it. I did so because he chose to be a smart ass about the whole situation.

The parent is essentially mad because I didn’t take the child’s word for it. The parent throws out there that their kid is a founding scholar, he’s this, he’s that. I told the parent that I didn’t care about any of that so save all that. The conversation went nowhere and my principal came in to defuse the discussion and take the blame for “leaving me in with the seniors,” as if I didn’t know what I was doing. I was offended by that comment, because frankly, I know how to handle myself with students. I wonder if this parent/colleague or anyone else who happens to have a child attends school where they work could handle themselves without bias when it comes to situations concerning their children. I know I couldn’t, and from that standpoint I am completely aware of the position of my colleague/parent. However, that has nothing to do with me and my job or the fact that your child ran to you thinking that you could put me in my place about a situation where he did not listen to me.

A few takeaways from this situation… As a father, I want the best for my son. If I felt that my child was being unfairly targeted, I would be ready and willing to defend him. But there comes a point that every parent must allow their children to defend themselves. The lines are blurred when as a parent; you have access to your children more than the average parent; in this case when you work at the school your child attends.

A parent has to be more cautious and calculated when responding in a situation such as this. They must whether or not they work at the school their child attends. If they do, like in this case, they should be measured in all approaches when it involves their children. If a parent is not, they will be perceived as irrational and a bully. A child will not always have a parent to run to. Parents must remember that. Conversely, teachers must stand their ground. You must be honest with yourself when dealing with parents and students. If you made a mistake, own it and reconcile. If a parent pushes, stand your ground with integrity. Don’t be condescending or elitist in your conversation, rather be strong. You may not be able to change relationships and school politics. But you can show others that those things cannot and will not change you from being a person of integrity.[/fusion_builder_column][/fusion_builder_row][/fusion_builder_container]

Charter School Diaries No. 2 - Paying Attention to Our Work 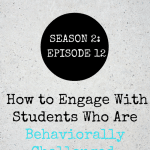 [Podcast S2E12] How to Engage With Students Who Are Behaviorally Challenged
« I Am a History Major- And I'm Okay With That.
Social Justice Belongs in Education - The Teachers 4 Social Justice Conference 2013 »