The lines in Target weren’t long yesterday but they were slow. Each queue had at least one shopping cart with thirty spiral notebooks, three packages of pencils, a half dozen packs of notebook paper, a stack of solid colored folders, and boxes of crayons, pens, and markers. I am intimately familiar with these items. They are the tools of the trade.

Upon the receipt of a credit card, the supplies were loaded into huge plastic bags with a red bull’s eye printed in the center. The children accompanying the shopping carts and lumpy sacks of supplies chattered about going back to school. They were excited and nervous in varying degrees. Some were ready to go back to see their friends. The Hermoine Grangers were ready for the challenge of the next year’s learning. Some didn’t want summer to end. Their mothers, however, all looked ready for summer to end.

In a few days, those huge awkward bags will be transported to school. I have seen mothers carry babies while pushing a stroller filled with school supplies down the hall toward my classroom. The bags were dragged up a tall flight of stairs to my room. A big sharpie sat next to the door to mark each sack with the owner’s name and then put in the coat closet to be sorted. In an ideal world, I had a student teacher to begin that process. Most years were ideal, in that regard. The sorting of twenty-some piles of individual materials into some sense of order for storing is rather like dropping huge jars of buttons and dividing them by color, size, and number of holes.

First, out came the pencil box which was labeled with the owner’s name via permanent marker. Into each box was added one box of crayons. The owner then placed the box into her now no longer empty desk. After that our room became a communist strong hold. The remainder of the supplies was joined with everyone else’s. Bins were filled with paper towels, Lysol wipes, tissues, and what we in Room 203 called “hanatizer.” Some of these were left out on a set of child height shelves so I would not have to stop what I was doing to get a new box of tissues on a particularly snotty day. This is much better than being interrupted by child holding his hand over his nose telling you the obvious, that he needed a Kleenex. Stat!

Spiral notebooks and folders were sorted by color and stored on a shelf. Yellow folders then would have “Bingo’s (or fill in any name you like) Parents Folder written across the front. These would have graded work and newsletters sent home each Friday. There were green homework folders. Names were written on Red Reading Notebooks. In February, the pretty pink and purple notebooks brought in each fall by seven year old girls became poetry books for both genders.

Skinny brushes were pulled out of paint boxes and put on the “free” table set up in the hall for some enterprising individual who would put to a good use what was useless to me. They never stayed on the table more than a day. Later in the year, thick water-loaded brushes would create batik-like crayon resist paintings of whales, desserts, and the solar system.

A forest’s worth of notebook paper was divided between the Writing Center and a shelf where it was readily accessible to everyone for whatever purpose. Markers were stored higher and were saved for posters and special projects. I am partial to crayons are they lend themselves to more creativity. In my opinion, markers are on the same level as stick figures. They serve a purpose, they come in handy, but they lack subtlety.

The good quality pencils were stored in front of the cheap pencils that are sold for one cent as a loss leader in the drug stores. Here’s my rant: Cheap pencils aren’t worth the penny you spend on them! I have wasted hours and hours of my life sharpening those things only to have to throw them away because the leads are not centered and you can’t write with them. Or the lead is so loose, it breaks on the first letter. Or even worse, there are dozens each year without lead at all. They – make - me - NUTS!

Even the empty sacks were put into a bag o’ bags to be pulled out as an emergency backpack, to carry home the prize winning pumpkin from the Halloween estimation station, or a raincoat for a walk home after school in the pouring rain. They were inevitably used up before the year was half over.

But before the sacks were stuffed into my closet, they were given a good hard shake to get at what was hiding in the bottom. What poured out with that shake were the hopes, often secret, of each child and their parent for the school year: the wish for a best, best, best friend, hopes for a teacher who really likes you (yes, the parents want the teacher to like them, too), fun, and such exciting things to learn that your eyes bug out just waiting for the lesson. Sometimes the wishes were just there, unnamed, the desire for something good that causes eager anticipation. The room filled with it as it wrapped itself around everyone there, even the nervous Nelly and shy Stanley. It made us all giddy with anticipation. Ah!

My wish for you is that your school year be as grand, or better yet, even grander than your dreams. 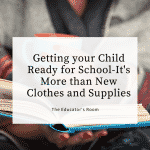 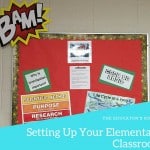 Setting Up Your Elementary Classroom 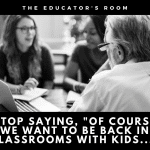 Stop Saying, "Of Course We Want to Be Back in Classrooms with Kids..."
« It's August: Better to Get to Work on those Summer Work Packets!
Robin Williams Passing Shouldn’t be in Vain »