I had a student observer this past spring who asked me "how we do it?"

She wanted to know how, in spite of all the stuff thrown our way - the attacks on the profession, the teachers, the union, the pension, the lifestyle, the politics, the "part-time worker" status, the lack of results - and so on - are teachers able to do this job everyday (and do it well).

My answer was pretty brief. I get to cash commission checks every day.

Previous students hardly even know I'm cashing in on them. Indeed, it's a minuscule number, somewhere in the 0.0001% and 1% range. But consider its application:

You see, some people are driven by huge, immediate dividends. That seems to be the way of stock brokerages, many business firms, and the success of many personal and professional enterprises.

That's because our careers are basically a pie dish, made up of the slivers of success throughout the years.

I learned that from my cooperating teacher when I student-taught. I always wondered why he collected the college stickers of all the students he taught even though he was a 7th-grade teacher. For him, it was easy. The district - which is now a very affluent one - was not that when he began teaching there, or, even more so, when he was a student there. As students came back to give him thanks for his influence, they began to talk about how the successes in his and others' classrooms birthed new opportunities. So, he began to ask them for bumper stickers from their college. His windows and walls were covered like it was a Christmas collage of higher-learning from his first year to his fortieth.

When I pressed him on what about the successes of those who didn't go to college, he immediately turned to a folder in his filing cabinet, opened it, and threw it in front of me. He said, "there's more in here than there are on the walls." And, after reading several of the letters expressing the most heartfelt gratitude, I knew exactly what he meant.

This isn't to take anything away from our students. They deserve - without equivocation - all of their successes that they mount on their own. But it's nice to take a feather from each one of those successes throughout the years and place it in my cap. All In A Day's Work - An Oklahoma Teacher Reflects 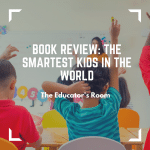 Book Review: The Smartest Kids in the World

The New Teacher Smell
« Equity in the Classroom: Content, Pedagogy, and Results
Teaching the "I Can't" Student »