It’s loud. I’m tired. I’ve tried getting these 35 students under control 3 times already this hour. I’ve had enough! Do your work! Pay attention! Listen to me! It’s time to go to the principal’s office!

A recent article in The Guardian has labeled yelling as “emotional child abuse,” and it’s opened my eyes to two questions: Why do we yell? Do we really need to?

For some teachers, the source of our screams are outside of class. We lead normal lives like other individuals, filled with ups and downs, curves and straight-aways, and a whole host of life events in between. Our families can be difficult. Our own parents, siblings, and spouse can trigger a frustration. Teachers tend to sleep less than the average worker. Many seem too stretched to the hourly limits of a work week. They tend to be more depressed and anxious than other professions. Most of all, many lack the support they need to continue to grow.

On the other hand, the triggers in the classroom are even more plentiful. We wish we could jump into students’ shoes and do their work for them. We’re frustrated by wasted genius. We battle sloth and laziness. Parents who are both under-involved and over-involved drive us to frustration. Our colleagues can make silly mistakes that itch us the wrong way. We’re under a microscope by our fellow staff, our students, their parents, the principals, district office administration, and state and national standards. Our kids need to perform more and more each year while it seems like we’re given more and more to do.

NO WONDER WE JUST WANT TO SCREAM!

However, the image of the hot-headed, yelling teacher needs to end. And we need you to help retire it.

In the early 20th Century, paddling was accepted as regular forms of discipline. While there is a small movement to reincorporate corporal punishment, a huge majority of education’s stakeholder will admit that we dropped the ball by allowing teachers to physically harm our students.

Most of all, we were poor role models to students. Studies have shown that children who were physically abused – both in and out of the classroom – tended to abuse their own spouses and children. We needed to change and improve, and we did.

Yelling has to join paddling. The scream has to be start to collect its pension.

The student scream is diabolic on many accounts. Teachers work diligently to build their reputations. In fact, for many of us, it’s our most valuable asset. The fact that we can command respect without a student-directed shout is one of the biggest tools in our toolbox. Instead of the angry, frustrated shout, try the following tactics:

Another reason why teachers yell (and probably a more common one) is to quiet the classroom. However, that doesn’t work. Here are some strategies to employ:

If you find your voice hoarse at the end of the day, you might need to ask yourself a few questions and reflect on them with a T-Chart, on one side highlighting WHY YOU YELL and on the other side finding other WAYS TO IMPROVE.

Once you’ve removed yelling from your classroom, you’ll see yourself being a much more positive, happy teacher. The students will also follow suit. Just have faith in what you’re doing, and don’t be afraid to reflect on why you yell. Your students this year and years to come will thank you.

Know More, Grow More - 20 Ways to Make the Most of Your Summer 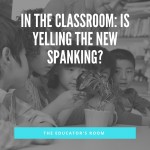 In The Classroom: Is Yelling The New Spanking? 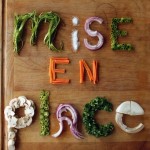 My mise-en-place: Inspiration for the Classroom
« The 5 Things Every Parent Can Do to Help their Child Become a Better Reader in Elementary
Disruptive Innovation: Gaming and Education [Part 2] »