As a Black teacher who advocates for the importance of diversity, equity, and inclusion, the heated debate about a Black Mermaid has piqued my interest on many levels. I recently discussed the issue with members of my African American Student Union who had similar responses.

"Why do they care so much?"

"What difference does that make in the story?"

My students were not only confused by the debate but wondered how anyone could ignore the blatant racism on display. Through our discussion, I was able to teach these students about historical depictions of Othello, discuss the use of blackface, and then circle back to the current debate about mythological and make-believe characters being played by Black actors and actresses. Students began to google articles and social media posts. Their eyes widened at the vast amount of racism they felt was jumping off the pages and slapping them in their faces. As Bernice King recently tweeted, "Mermaids are fictional, but racism is a fact."

It seems people can celebrate characters who are mythical, fictional, and magical…as long as they ain't Black. As I write, the autocorrect tries to continually replace my use of the word "ain't" with "standard English." This "autocorrect" might be similar to what is going on in the minds of many folks when they see traditionally white characters played by Black actors. They are unable to see past historical White representations of characters from the original fictional stories. These people are fine with fantasy “as long as the casting [of characters] still reinforces a white, male-centric worldview”.

As I always try to practice empathy, I tried to get into the mind of those fighting against Black characters playing traditionally "White" roles, even fictional ones. Trying to put myself in the shoes of another, I was left wondering if my mind subconsciously did the same when I saw Richard Burbage and Laurence Olivier playing Othello during my studies of the play in graduate school. As I contemplate further, I realize putting myself in the shoes or mindset of others is a form of empathy that racists cannot embrace. Bold statement? Not really. It is a statement of fact.

Let's get real for a minute. Othello was depicted as a Moor. While some argue that Moors could be from Africa, they could also be from the Middle East or even Spain. However, when Iago describes Othello as "an old black ram… tupping your white ewe," the fact that Othello is a Black character is essential to the plot of the play. Nonetheless, White actors played Othello on the stage and screen for years.

In contrast, when we think about the heated arguments around why Ariel in The Little Mermaid is Black, The House of the Dragon's major character, Corlys Velaryon, is Black, the immortal elf Arondir in The Rings of Power is Black, and the mere mention of the idea of Idris Elba playing James Bond in 007, the central issue is that these fictional characters were originally depicted as White. No one seems to have any issues that characters originally written as Black characters like Othello were played by White actors. All of the other characters being discussed these days are mythical, fictional, or make-believe, but the racism behind the complaints about them being played by Black folks is quite real.

MSNBC discussed how the "Blackness" of these characters has "disrupted [many] ideas of who ought to portray brave knights, elves, kings, queens, and heroes." Decades after the original representations of these characters depicted monolithic and "acceptable" portrayals, the "how dare you" mindset rallying against change is rearing its ugly racist head. #NotMyAriel and #NotMyMermaid are not the first nor the last hashtags that reeks of this biased ideology. Twitter has been overwhelmed with debate over the ridiculousness of this mindset. Many have begun to mock the movements. "I'm offended by the casting of a woman of colour as Ariel," a person tweeted. "They should have used an ACTUAL, real mermaid. Sick and tired of this human privilege." In the same way people might think the previous tweet takes things to the extreme when it comes to blurring the lines of reality and make-believe, do people forget that these characters are not real? What's real is the underlying motivation for the outrage. Let's call a spade a spade. Racism.

So what do educators do with this "exhausting and extremely predictable" uproar that is deeply rooted in racism? Call it out. Name the real issue. Give Black students safe spaces to voice their frustration. And don't forget to amplify the importance of the representation of Blacks in all genres of literature, movies, and media venues.

"[After all,] these [negative] arguments often drown out the voices of fans of color who are overjoyed when they see themselves reflected in the legacy media they love — like the parents who celebrated the new Little Mermaid trailer by sharing photos and videos of their Black daughters reacting ecstatically."

Educators, let's celebrate Black Joy! Encourage the diversity, equity, and inclusion of people of color in modern mythological depictions, fiction, and the vast world of make-believe. Call out the subconscious use of "autocorrect," which many people think is just the way things are "supposed to be." Change the narrative. Instead of worrying about the color of imaginary characters' skin, try to think about the reality of those who are constantly denied representation due to the color of theirs. 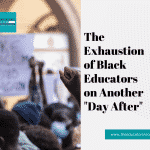 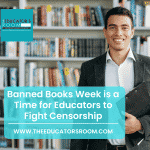 Banned Books Week is a Time for Educators to Fight Censorship 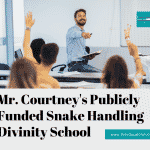 Mr. Courtney's Publicly Funded Snake Handling Divinity School
« Banned Books Week is a Time for Educators to Fight Censorship
5 Things You Can Do This Month to Support Your Latino Students »