In the past, as my class lined up at the door every morning between Thanksgiving and winter break, I used to remind them to “check Christmas at the door.”  Sometimes, especially when it was snowing or the week before break, I’d take a storage bin and told them to drop all the Christmas excitement in it as they entered the room. “You can have it back when you leave.” As second graders will, they pretended to toss something in as they passed by in a very serious manner.

Keeping focus before the holidays is hard in any grade but it especially so in primary grades where Santa looms in the near future of many students. The students who didn’t have a Santa in their lives due to religious beliefs also have a hard time waiting for their classmates to come back to Earth. Distraction is an effective way to even the playing field. This is when teachers have to wear their best magician’s hat.

Each December, our grade level team became project oriented. We tried to make it as exciting as possible to get them to look at our left hand while we hid Christmas with our right. We needed to channel all that anticipation into learning. We studied dinosaurs, whales, or anything that required research and lent itself to creative ways of showing what they had learned.

Our writing curriculum included writing a non-fiction book. This was perfect for December. We tied it to whatever topic we were researching. The book process required concentration. It had multiple steps. If the topic was whales, I actually took a period to teach how to draw a whale. This saved me a half dozen boxes of tissues for the “Boo-hoo! I can’t draw a whale!” sobbing. Since non-fiction book writing is a multi-step process, checklists were needed. I could glance at these to see who needed a yank out of Santa’s workshop back to the reality of the classroom.

Students were given choice on how to demonstrate what they learned. Mobiles, posters, math problems, maps, poems or Venn diagrams filled the room until I wondered where another thing would fit. When it came time for a spelling test or a math lesson, the kids were actually ready for a little quiet time and settled down easily.

Because we had too much Christmas hoopla, we decided to celebrate New Years instead. This allowed our non-Christmas kids to be a part of the excitement. We looked at worldwide traditions, shared our family traditions, and planned our New Year’s Eve party. The last morning of class, each classroom became a center for an activity. One teacher made noisemakers, one made masks, and one class wrote resolutions. We traded students, each class going to another classroom to do the New Year’s activity. This was incredibly effective at keeping the frenzy at bay. After lunch, the party began. 2:00 p.m. became midnight. All the classes went into the hall and counted down to midnight. It was a blast!

Our December goal was to dive deep and channel the building excitement into energetic learning.

What do you do to avoid the Holiday Hoopla?

Did You Lose More Than Daylight Savings Time?

What to Do About Your Perpetual Motion Student 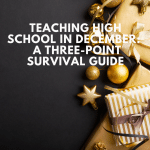 Teaching High School In December: A Three-Point Survival Guide
« Special Education Assistants - How to Make the Most of an Important Resource (Part 3)
For You I Am Grateful »