A Conversation with Award-Winning Educator and Recording Artist, MR Carter

It’s no secret that more Black male educators are needed in the classroom. Nothing makes it more evident than the post that’s been floating around Facebook for years. It reads, “What grade were you in when you had your first Black male teacher?” Although I’m a Black woman— my comment is always the same: I never had one.  And unfortunately I am not alone. According to Education Week (and many other sources), just about 2% of all teachers are Black men. Considering the incredible impact that Black male educators have in the classroom—especially for Black students, this number just isn’t enough.

This month– during Black Music Month, I had the opportunity to sit down with Corey Carter also known as MR Carter. He is a science teacher, husband, father, mentor, the 2016 Baltimore County Public Schools Teacher of Year, and a recording artist. We discussed the importance of mentorship and how he is sharing his experience as Black male educator through his forthcoming album, Progress Report.

The Educator’s Room: Why did you become an educator?

MR Carter: People describe education as a profession or a calling. For me, it was definitely a calling. I’m very fortunate that it was a persistent calling for me because I tried to deny this path.

The first time, I ended up interviewing for a tutoring job with my best friend my junior year of high school. I had never tutored anyone or did any work in education. I ended up getting the job and my friend didn’t. That was my first time, first exposure leading in an education space. I got a taste and started to fall in love with the idea of helping other folks.

The second time I was in college and I thought I had to choose a certain major of prestige. I love biology and science so I thought the highest thing I could reach for was research. But it ended up just not being for me. My mentor had actually signed me up for Freedom Schools—this dope summer enrichment culturally-grounded reading program for youth. I went to their national training before starting the camp. It wasn’t your typical educator training— this pedagogy showed me again that I have this path in front of me and I need to listen to it and engage. Going there lit the fire the second time.

And that’s my long way of saying that’s how I became an educator.

TER: Mentorship is a huge part of your work—the mentorship of students and educators—why is mentorship important, and how has it helped you?

MR Carter: Let’s step back a little bit. On a basic human level we all have this necessity to feel connected and exist in community with one another that underlies just about everything that we do.

Mentoring isn’t about looking at someone and saying “I see where you’re short. I see what you need. I see everything that’s wrong with you. Here's how we’re going to fix you.” It's very selfish to be edified by pointing out something that’s wrong with someone else, prescribing something and walking away like, “Cool, I saved somebody.” That shouldn't be the perspective about mentoring.

Mentorship is a powerful way of not only affirming that connection for folks, but also rehumanizing ourselves. Mentorship, coaching, and teaching are things that we do where we talk from the perspective of pouring into others. But it’s reciprocal. When done right, you are absolutely absorbing a lot from the folks that you mentor, teach, or support. In many ways I think that’s how love works. It’s not a one-directional thing. There are folks who have poured into me. That’s not for me to just take and say, “Alright I’m cool. I’m good. I can stop now.” It’s very much on me to continue mentoring others. Mary Church Terrell talked about lifting as we climb. There’s folks still lifting me. And at the same time let’s see who I can bring along too.

TER: What inspires and drives the music you create?

MR Carter: I’m going to tell a story. I see my honor as Baltimore County Teacher of the Year in 2016 as a nod to the community.  When I joined Old Court Middle School, it was a choice between Old Court and an interview to be a door to door vacuum salesman. When I joined the community at Old Court, everything that I was trying to pour into the kids, was poured into me—people seeing me, lifting me, and giving me opportunities. I got the title, made a speech, but it was about us.

As part of my platform, I wanted to see more Black men in education. But I didn’t want to speak from a place of being uneducated, so I was pouring into research papers and articles. Then I thought about it, “When I was trying to figure out if I wanted to teach, would I have picked up a research paper and read that?” I don’t know, but I know at that time I was into a lot of hip hop.

So then I searched, “Who’s talking about education from the hip hop perspective?” But I didn’t find much, maybe one or two songs. My initial music direction I was going in was making a hip hop recruitment album about why we need Black men and people of color  in education.

But what I realized through  the writing process was in order for me to try and speak to folks, I had to be in conversation with myself. In order for me to talk about experiences, impact, struggles, pain, and trauma, I had to unpack those things and ask those questions for myself. At times, I put the pen down for months, and I had to experience something in a different way or switch to a different medium and come back to it. But ultimately that’s how the music took shape.

TER: What is your hope for the Progress Report?

MR Carter: For my forthcoming album I want to shed light on my experience as a Black male educator and to invite others to explore it. It’s been like an experiment for me to see what the limits of hip hop are as a method of unpacking the experience of calling out to others and pushing back against oppressive systems. Another goal is to elevate and shed more light on people who are in the classroom and in the studio. I’m using Progress Report  as one application for survival and thriving and hopefully inspiring others to follow this path.

TER: Where can people find your music?

MR Carter: I'm on all major streaming platforms—Spotify, Apple Music, Amazon. You can search for me. I hope that the music speaks for itself. It’s to tell my story of what it was like being in the classroom. I’m looking forward to sharing more and more with everybody.

TER: Is there anything else that you want educators to know?

MR Carter: As Tupac said, “You are appreciated.”

I’m working on a song right now and the main part is “You are enough.” It was born out of me trying to motivate myself and starting a process of affirming myself from within first. There are so many negative messages and misguided opinions about how folks should teach, who should teach, and what we should teach. As we continue to strive to be the best educators we can, it’s also important that we affirm ourselves and say, “I am enough by showing up in the classroom and loving children and loving myself. This is ok and this is where I am going to start. Then I can aim high and hold high expectations while loving myself at the same time.”

I think there’s something powerful about starting that work on the inside before anybody else can come in and try to shape anything. You are appreciated absolutely, 100%.

A huge thank you MR Carter for participating in this interview and sharing what drives his music with The Educator’s Room. You can check out MR Carter’s music here.

This interview is a part of Educators Unsilenced, a monthly interview series on The Educator’s Room by Lanee Higgins. Each month Lanee interviews educators making their impact on education. See last month’s interview here. 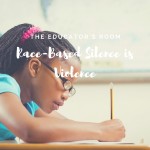