I am in a hotel room with three millennials: Grace, 24, Gabriel, 22, Glorie, 20. An argument is raging: How can I be civil with people who support evil? I know that’s harsh. Is your neighbor who voted for Trump evil? I’ll say no. But these young people are having none of it. If you support racism, sexism, misogyny, discrimination, and oppression, authoritarianism, and fascism you are at best complicit, at worst a perpetrator. They understand teachers must exhibit tact and diplomacy in the classroom while standing firm on what can be defined as evil in the human story. Totalitarianism, oppression, discrimination, genocide: we learn about these evils to prevent them in the future. That is why they must receive no quarter from teachers today.

In their eyes, President Trump represents the worst elements and practices in American politics and society. For them, and many like them in the liberal and progressive wings of the political spectrum, anyone who supports the policies of the Trump administration deserves to be treated with incivility, in the same way, Press Secretary Sarah Huckabee Sanders, Immigration hard-liner Stephen Miller, and DHS Secretary Kirstjen Nielsen were driven from public dining establishments by hostile crowds opposed to the Trump administration policy of separating children from their parents at the US-Mexico border. As their dad (as a second-generation Holocaust survivor), I take pride in their sense of opposition to the existence of evil in American government and against those who support inhumane, bigoted policies. As a teacher, this methodology is not recommended pedagogy. The secondary classroom must be a safe space for all students to express their views. The teacher must be a model of civility while teaching students how to accept others in spite of race, religion, sexual orientation, or, dare I say it, political views.

Teaching History Is Hard. Learning About History is Harder

For those of us in the trenches of American social studies education, a moral dilemma exists. There are parallels in history between the rise of fascism in the 1920s and 1930s in Europe and the planting of similar seeds in American politics and society in the second half of the present decade. As a case in point, if I displayed the following poster in my classroom, it would cause a firestorm of controversy, one that could result in my dismissal. The poster appeared in the gift-shop of the United States Holocaust Memorial Museum but has since been removed. The contents of the poster include these “14 signs of the early warning signs of fascism:”

The list above seems to bring about increasing alarm on the left and even among moderates on the right. GOP Arizona Senator Jeff Flake, a vociferous critic of President Trump, stated in a commencement address at Brigham Young University:

And our Article I branch of government, the Congress (that’s me), is utterly supine in the face of the moral vandalism that flows from the White House daily. I do not think that the founders could have anticipated that the beauty of their invention might someday founder on the rocks of reality television and that the Congress would be such willing accomplices to this calamity. Our most ardent enemies, doing their worst (and they are doing their worst), couldn’t hurt us more than we are hurting ourselves…

How did this happen to us? And what might we learn from it? How did we get swept up in this global resurgence of the authoritarian impulse, which now has democracies teetering on the brink, strongmen placing themselves above the law, and in our own country a leader who reveres some of the most loathsome enemies of democracy in our time?

There are no easy answers for the teacher who may be asked this very question: Is Trump a fascist? In an interview with Slate Magazine’s Isaac Chotiner, author Robert Paxton states unequivocally “yes and no.” He does not believe Trump’s tendency towards authoritarianism is deliberate. But Trump is a showman and a master of manipulating the media, and in turn, he continues to command a strong following among Republicans and conservatives in spite of policies and statements that are overtly racist and that run counter to values that have been long accepted as American values, such as supporting diversity, due process, pluralism, freedom of the press, and constitutional principles such as the rule of law and the separation of powers. Trump has tapped into the racist, xenophobic, and nativist roots of American society enough to capture the White House and bring with him to the pinnacle of political power the Republican Party, which has made a Faustian deal with Trump supporters to control all three branches of government while surrendering long-standing GOP tenets as free trade, laissez-faire economics, and American leadership in global affairs.

It is darkest before the dawn

The resignation of Supreme Court associate justice and swing vote Anthony Kennedy has led to a high level of hand-wringing among liberal and progressive voices in government and on social media. Fears of a staunch conservative replacement and rulings such as the overturning of Roe v. Wade, the end of affirmative action, continued voter suppression, and the reversal of rights made by the LGBTQ community are real, and these future cases will have a direct effect on teachers and the students in their care. The solidification of conservative ideology on the Supreme Court will continue to silence voices in Congress and mute any challenge to Trumpism in corporate and academic America.

Democrats are calling for the Senate Majority Leader Mitch McConnell to apply his own rule to this vacancy by delaying confirmation hearings until after the 2018 midterm elections, the same rule that prevented a vote on President Obama’s pick to replace Antonin Scalia in 2016. In an example of extreme political hypocrisy, Republicans will be sure to seize this opportunity to change the ideological balance of the Supreme Court for decades to come, confirming a Trump nominee before the November 2018 midterm elections. GOP senators will have to ask themselves: “Can we survive the 2018 midterms if we make abortion illegal in the United States, prevent minorities from job and college placement, and roll back marriage equality nationwide?” The political direction of America will be decided by those who turn out to vote in November, or more likely, by those who learned from 2016 and stayed home.

The political direction of America will be decided by those who turn out to vote in November, or more likely, by those who learned from 2016 and stayed home. Click To Tweet

A Voice in the Wilderness

One voice on the left that has been remarkably quiet is that of the 44th president, Barack Obama. He has been reluctant to criticize his successor until now. At a DNC fundraiser in California, former president Obama gave assurances to his audience:

“Fear is powerful... Telling people that somebody’s out to get you, or somebody took your job, or somebody has it out for you, or is going to change you, or your community, or your way of life — that’s an old story and it has shown itself to be powerful in societies all around the world….”

“It is a deliberate, systematic effort to tap into that part of our brain that carries fear in it...”

“Do not wait for the perfect message, don’t wait to feel a tingle in your spine because you’re expecting politicians to be so inspiring and poetic and moving that somehow, ‘OK, I’ll get off my couch after all and go spend the 15-20 minutes it takes for me to vote.’”

Protecting all students from the adult world

Civility is still the watchword in the classroom. There will be differences of opinion. Teachers have a responsibility to help students recognize patterns in history and make connections between past and contemporary trends. Navigating these waters will not be easy. As teachers, students must be able to define evil as we have seen it in the past. Trump is not Hitler, and it would be a mistake to characterize him as such in the classroom. Nevertheless, students belonging marginalized communities may express alarm at Trump’s policies because these policies are race-based, focus on ethnicity and nationality, and they create an atmosphere where “the other” is no longer welcomed in America while giving sanctuary to white nationalistic and neo-Nazi underpinnings. By presenting historical evidence in our lessons and discussions, we hope students will use the skills afforded to them by teachers to draw their own conclusions. There will be no name-calling, but there will be teaching, thinking, and learning. 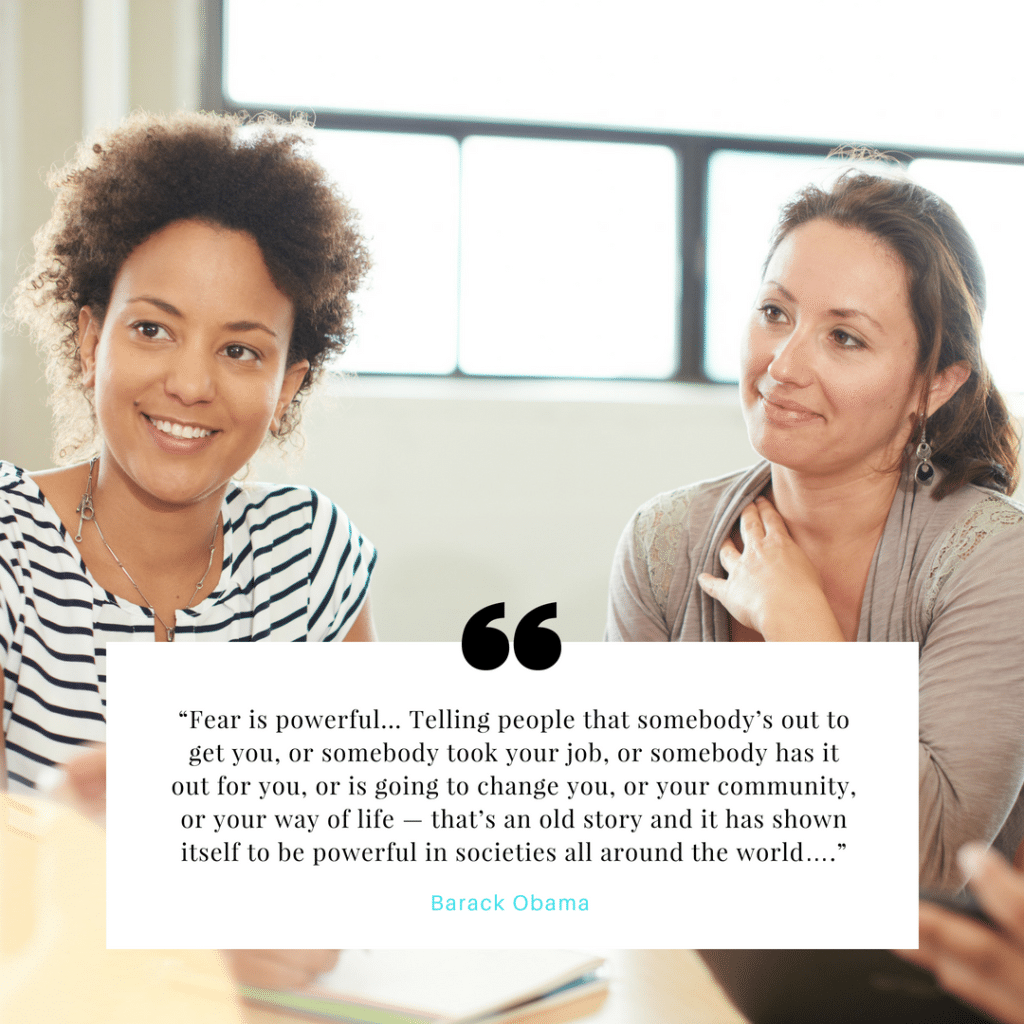 The Politics and Pedagogy of Immigration Policy
« [Opinion] If You Are a Quality Educator, You Can't Be Pro-Trump
Creating a Culture Supporting Achievement: Having fun in School! »