Kevin M. McIntosh’s short stories have appeared in the American Literary Review, Beloit Fiction Journal, Potomac Review, Chicago Tribune and have been nominated for Best New American Voices and the Pushcart Prize. He has had fellowships at the Ragdale Foundation and Blue Mountain Center. His novel Class Dismissed (Regal House Publishing, July 2021) is informed by his thirty years of teaching English in New York City, Oakland, and Greater Boston. Visit him at kevinmmcintosh.com.

Teaching is a humbling profession. The occupation that it comes closest to is parenting. And, like parenting, you never master it; it’s never a done deal. Sure, there are books on how to do these things, but they never cover the hard stuff, the real stuff––the survival stuff. So much our parents never taught us, that our professors never taught us in education school.

As a new teacher, I spent many prep periods observing experienced faculty members at work. They came in all shapes, sizes, genders, orientations, colors, ages.

But, unlike me, they all had command of their classes. What was their secret sauce, I wanted to know. They were all so different in the presentation: Marty, the former wrestler––a gentle giant––who never spoke above the level of conversation, made kids lean in; Shelly, a tiny woman, brash New Yorker, flip but demanding, made kids laugh; Judy, formal, intense, unafraid to use endless wait time following a question, made her students want to learn. How they taught was so distinctive, yet, in every case, so effective. What was their mojo? And, more importantly, where could I get mine?

Turned out they all had one thing in common, they had a Teacher Rep. When students entered their classrooms, they knew something worthwhile was about to happen. Students entered alert but relaxed in the knowledge that their time was not about to be wasted. They were ready to learn. Unfortunately, as I discovered, you can’t begin your teaching career with a Rep. It has to be earned––it has to be built.

Two decades later, a younger colleague was grading papers in the back of the room we shared. When the bell rang and my class trickled out, she looked up from her papers, disgruntled.

“I begin every class shouting my kids to attention. And you . . . you just say, ‘Welcome writers and lovers of literature.’ And––boom!––out come their notebooks, they’re all listening.”

“Well,” I smiled, “I paid for this gravitas. Believe me.” I had a Rep. And the scars to prove my point. Then I realized: I had become that teacher I envied.

Welcome, writers and lovers of literature: a mantra I stumbled on midway through my career. Every class from then on began with this greeting, this invocation. Some of my eighth graders, dubious at the proposition, giggled nervously on first hearing it. But they soon expected and cherished this greeting. It was inclusive and held out the possibility––the expectation––that all could be writers, that there was literature all could embrace, with passion. We were embarked on a special mission: when you entered room 224, you were standing on holy ground, not just the next classroom on your schedule. In my writing workshop we spent many hours writing––that’s what writers do––but we once spent part of a class period watching a squirrel find creative ways to assault a bird feeder because writers do that too. The mundane and the magical––that’s a writer’s life, and a teacher’s.

And finding your place on that mundane-magical scale is key to building Rep. When I was a new teacher––in the Reagan Era––they told us in Ed School, be the Guide on the Side, not the Sage on the Stage. But this is a false choice: to succeed over the long haul, to build Rep that lasts a career, you need to be both, alternating modes depending on what, when, and whom you are teaching. This is where self-awareness comes in, taking a clear hard look in the mirror: are you a natural magician or logician? How can you make the most of your in-born gift, how to shore up your weak side?

Before I became an educator, I worked in the theater. And, unsurprisingly, as a struggling new teacher, I fell back, hard, into my performing comfort zone. The bell would ring and Mr. McIntosh would be off on his––sometimes literal––song and dance. And my students loved it. One mother showed up after school to pick up her sick daughter’s homework and said she had to talk her girl into staying home because she didn’t want to miss my class. I was worth the price of admission. But I was only two years in and could feel myself burning out. And, though I was only dimly aware of it, I was also taking up all the oxygen in the room, leaving my students less space for creativity and risk-taking. I was doing that for them.

Then Nancie Atwell––God bless her––saved me. An older, wiser English teacher plopped Atwell’s In the Middle on my desk, and––voila!––a writing workshop instructor was born. Ms. Atwell’s book helped me get out of the middle and turn much of my class time over to my students, sparing Mr. McIntosh from a future as a chalk-and-talk drone or performing seal, an aging, Rep-less pedagogue. Over time I found a balance, often leading with a zippy mini-lesson followed by a half-hour of writing accompanied by sotto voce conferences with individual students. Sage and Guide, in one class period.

But, vital to Rep-formation as self-awareness is, so too is an awareness of your students. Who are they, what’s going on for them at the moment? Sounds pretty basic, I know, but un-Repped teachers––and they are legion––plunge ahead with their preordained lesson plan, heedless of who they’re teaching and what’s happening in their lives. And I’m not just speaking of paying attention to the special needs of particular students––there’s already a very serious law regarding that.

I’m speaking of the time the young Mr. Mac spent an entire weekend polishing a multi-cultural, multi-modal, interdisciplinary gem of cooperative learning, only to show up to an uncooperative eighth grade Monday morning. Excited about my brilliant lesson plan, I ignored the more excited buzzing in my suburban homeroom. Friday night the grade’s alpha couple had had a spat at the Valentine’s Day Dance––Alpha Boy had slow-danced with the wrong girl––and the social hierarchy exploded. I grew angry as my carefully curated small groups refused to discuss anything else. Take out your textbooks, I finally barked at my kids, read chapter 17, answer the questions at the end. Shocked and sullen, my students did my bidding, working quietly for the rest of the period. But my victory was pyrrhic: I won the battle, damaged my Rep.

It didn’t have to go that way. The older me would have read the room, asked kids a few questions, and made a new plan. As an experienced teacher, I call more audibles than Tom Brady. Now I would save my masterpiece for later in the week and pull out a stack of practice sheets on dependent clauses. No problem with kicking it Old School on occasion. You have 180 days to work with, 900 classes; every play doesn’t have to end with a touchdown, just keep moving the ball downfield. And force-feeding an unwilling class is the worst possible Rep management. Students feel unseen and unheard and eventually, lose respect for their teacher. And getting angry helps no one.

I learned this first and best when I taught in Oakland and NYC, where my students had problems far more pressing than what had happened at the school dance. If your family has been evicted from your apartment or the grandmother who’s raising you is hospitalized, discussing chapter three of Of Mice and Men may be a non-starter. Some mornings, a quarter of a class showed up with problems on that scale. I didn’t become an effective teacher for these children until I learned to pay attention, ask questions, and have Plans B, C, and D ready for action.

Creating a Rep is about building a bigger, better classroom for you. Teaching isn’t just a performance, but it does require performing. The teacher with Rep is an authentic person in front of her class, but a persona too. The teachers we remember, the ones with lasting impact, were creative, quirky, in-the-moment presences. They were knowledgeable and prepared––that is the stuff of competence––but they had that x-factor that separates the good from the great. They could be counted on to present a solid, interesting lesson, but their moves were unpredictable, shaped by the needs of their students. And, as I learned from my masterful colleagues early on, Rep doesn’t have to come in a Robin Williams package; an exquisitely attuned introvert can be that teacher. Rep has a thousand faces. Young teacher, start building yours. 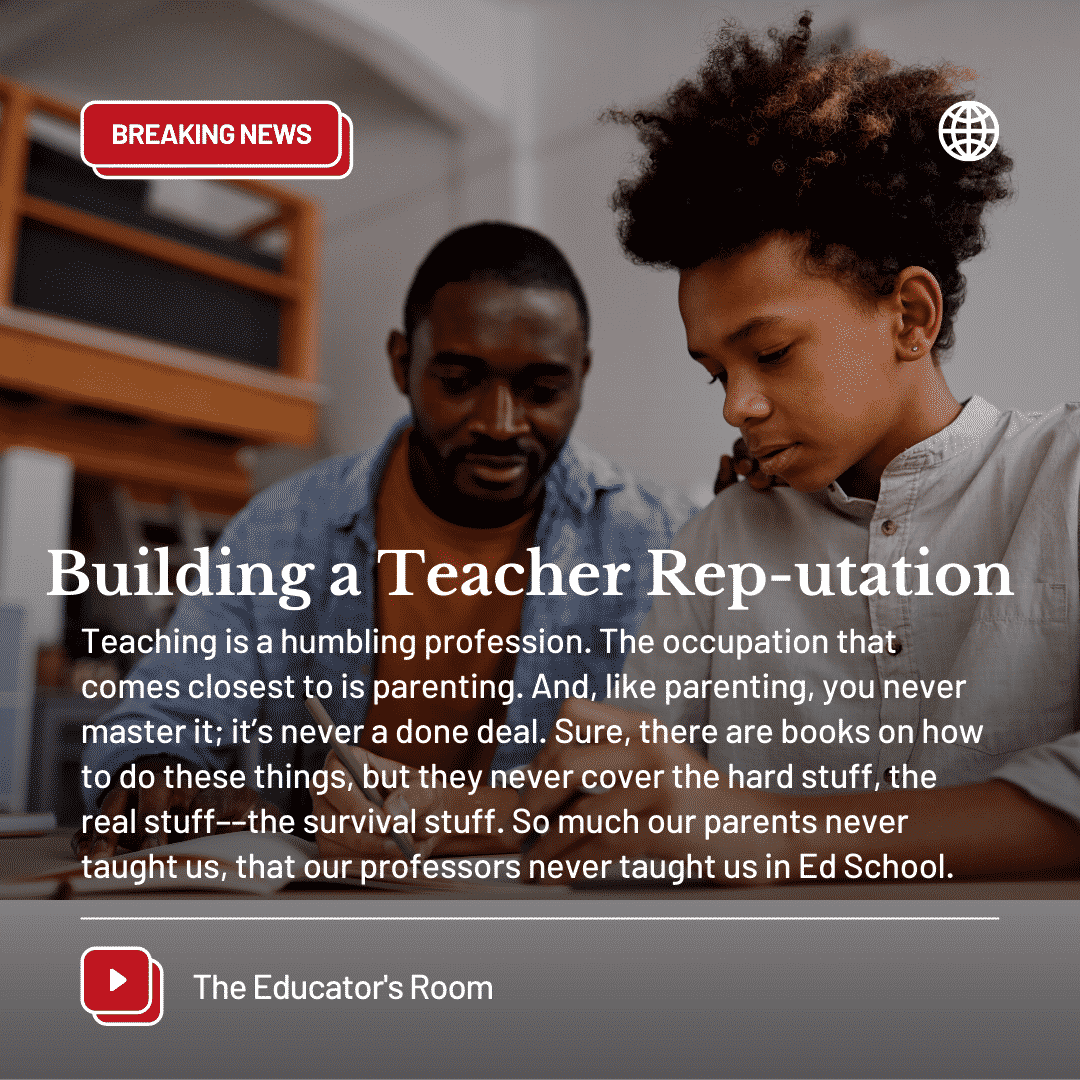 Reminders for the New Year for Teachers

First Day of School Tips from a Teacher 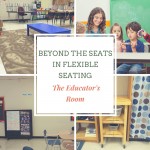 Beyond the Seats in Flexible Seating 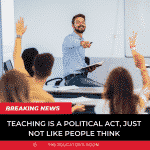 Teaching is a Political Act, Just Not Like People Think
« Reinventing Pandemic Schooling: More than Making Lemonade from Lemons
Joining or Avoiding the Educator Exodus »