Finding myself in a strike at the close of summer set me on a journey of uncertainty, turbulence, trust, and solidarity. I wrote about the start of it in  Columbus City Teachers' Strike Diary: Voting and Picketing. Those first days seem distant now, reminding me of how much can change in the course of a week. Teachers and students are back in the classroom, the residue of conflict remains, and we find ourselves at another unprecedented start to a new school year.

The strike band and BB guns

The community energy and support of the first few days of the strike increased for day three. Community members and their kids brought ice, water, popsicles, and their own signs of support. A traveling band of staff and students played familiar songs at picket sites, raising spirits when feet were sore. Despite the efforts to keep morale up, the tension was also heightened by the knowledge that negotiators were back to the table, starting midday with no telling when it would end or when an update would emerge.

I marched at a site where unknown people fired BB guns at the picketers out of the window of a moving car while shouting obscenities. Nobody suffered physical injuries, but the incidents traumatized teachers and staff who saw guns pointed at them before realizing that it was BB’s and not bullets. Those seconds stretched out as people looked around and asked if anyone was hurt, and thankfully, nobody was. Eventually, the police came to take a report, and we sought refuge under the shade on a hot and sunny day for a short break to decompress. When the media heard of the incident, they came to report from our site, and we were back on our feet, louder than before.

Bargaining into the night

We left the picket lines that third day without a bargaining update. We woke up to the news that our team reached a conceptual agreement with the board negotiators around 2 AM. There would be no fourth day of picketing. Instead, we had a remote day to organize to be in-person the following day. The importance of faith in your bargaining team came into sharp focus, as we would not get details of the agreement until Sunday evening when the membership would meet to vote on the conceptual agreement. We could make it our new contract or reject it and resume picketing.

Questions emerged about negotiations: Would the raise be 7%? How soon would the buildings be repaired? Will classes be smaller? There were dozens of questions coming from the different corners of our larger urban district. Anger at being taken off the picket line bubbled up here and there. But mostly, relief permeated the staff and community atmosphere. We waited to converge, learn, and vote.

Where do over 4,000 people get together on short notice? The minor league ballpark, an outdoor venue on a day with direct sun and humidity that put us close to 100 degrees. Long lines in the hot sun greeted us before we could even get into the ballpark to ensure that only voting members were coming in. Media had been locked out of our meetings thus far, but this venue allowed them to hear the presentation and discussion as it happened from the outfield walls. And it was emotional.

Our negotiators had a mic stand at the pitcher’s mound, where they addressed the membership in the stadium seats. The third-baseline half of the crowd had shady relief from the sun, while first-baseline folks sweated hard in the sun with the pitcher’s mound presenters.

As the afternoon turned into evening and the shade cast farther over the grateful crowd, we learned what three days of picketing and negotiating into the night could get us. Here are the highlights:

Several provisions won had been issues that the board had previously refused to entertain, period. In fact, the board twice offered versions of their “final agreement” before walking away from the table. But as the union negotiators went over provisions of the new agreement, boos sounded from the crowd.

Many wanted higher raises to edge closer to the pay rates of the neighboring suburban districts. Some felt like negotiators could have leveraged the overwhelming community support better. Others did not want to spend one more day in a hot, stuffy and even damaged classroom. They wanted immediate relief. Others felt that a two-student, class-size reduction was insulting when 35 students may still sit in rooms at the middle and high school levels. There were impassioned speeches, shouting about how the union needs to do better for our communities and that we could have gone further with the solid community backing we experienced on our picket days.

After a motion to vote, we cast secret paper ballots not knowing which way it would fall. We settled in for the potential for further voting to go back on strike and demand more. But in the end, the vote to accept the new contract far outweighed the votes to reject, and we left Sunday night ready to return to the classroom (after a good shower).

A year begins in the aftermath

Relief dominates the community as we start the year with less delay than many feared.Still, as Labor Day reminds us, the fight for progress never ends. Many students and staff returned to 85-degree rooms, some with damage to the floors and ceilings and only a contractual commitment to fix them over the coming years, after this year’s students will have moved on. Grievances are being processed, old and new. Social media boards call for the leadership of the superintendent and board to end before terms expire.

For now, we take a breath and celebrate the wins. Soon, we fight to make sure the contract is enacted faithfully. And in 2025, we start new negotiations. 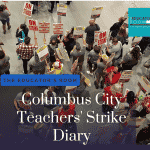 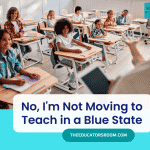 No, I'm Not Moving to Teach in a Blue State

Respect in the Classroom: Earned, Not Expected
« Everything I Know About Standards-Based Teaching I Learned in Karate Class
Voices from the 2% »