Have you ever read the book, Flowers for Algernon? It is the story set in the 1960's of a special needs adult man named Charlie who undergoes surgery to increase his intelligence.  At the beginning of the story, Charlie can write much as a young child can write, but he does not understand the concept of commas. After the surgery, his intelligence increases and he decides that commas just go everywhere! As his intelligence increases even more, he realizes how to properly use the comma as well as other portions of sentence structure and punctuation. Are you like Charlie? Do you constantly wonder where that almighty comma must or must not go? Who makes these rules anyway? Well, I am not sure why, but proper use of the comma (even for some of my colleagues) seems to be the one thing that continues to allude even the most intelligent of adults and students alike. I am here to tell you to, "Have no fear, the comma is here (and not going away, so get used to it)!"

According to the dictionary, a comma is "a punctuation mark (,) indicating a pause between parts of a sentence. It is also used to separate items in a list and to mark the place of thousands in a large numeral."  Well, that helps (interject sarcasm here).  According to the Oxford Dictionary, "A comma marks a slight break between different parts of a sentence. Used properly, commas make the meaning of sentences clear by grouping and separating words, phrases, and clauses. Many people are uncertain about the use of commas, though, and often sprinkle them throughout their writing without knowing the basic rules."  Now we're talking!  There are rules! But, who made up these rules??  Well, that's where things get complicated, but basically, a bunch of very intelligent, important people get together and decide....enough said.

If you are looking for a good website for the proper use of the comma, I really like Grammar Girl because she gives people clear and concise information, presented in an easy to understand format.  Check out her thoughts on the almighty comma. She'll tell you like it is! She will tell you that just because you pause that does not indicate a definite comma, and that there are types of grammatical situations such as appositive restrictives and appositive non-restrictives.  One thing to remember is that the most important reason for commas to exist is so that the reader can be understood.

In the movie "Charly," based on Flowers For Algernon, Charlie happily shows his teacher, Miss Kinnian, a type of riddle that involved commas:

Miss Kinnian is confused, so Charlie punctuates it in the following manner:

Punctuation can be your best friend when it comes to being properly understood. Neither you or your students need to be afraid of the comma or anything else related to writing. You just have to be brave and find out the facts and teach them to your students! The rules of grammar have changed dramatically over the past couple of centuries.  One thing is certain, the comma certainly and unequivocally, does NOT need to be feared or misunderstood.  So go, be brave, and use them everywhere (appropriately that is)! 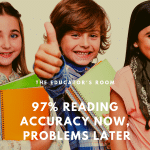 Where I'm From: New Year, New Understanding Using Poetry
« Week 5/6: iPad Rollout- Differentiation
Changes that Need to be Made in ESL »