Who would've thought that a simple homemade toy, promoted through collaborative effort online, would lead to.... The Imagination Foundation?

Or that simple, impossible design could be immediately useful.  This following blog inspired me to have my own students create housing based on our world studies of architecture.

Cardboard Housing       Why not? Cardboard is accessible and free, so why not let students' base knowledge combined with imagination produce something real? For educators, there is little cost, parents and businesses can provide recycled materials. Involving a community of collaborative talents creates opportunity for dreams to become true. I know it sounds cliche but it is true, if everyone is involved in thinking outside the box there is no focus on failure, only a focus on possibility.  Experiments that go awry lead to yearlong problem solving for the next annual event. This led me to think- in an era of prevalent social networking, if we are not rewarding creativity, what are high school teachers preparing students for?

At the 2012,  ISEA conference (International Science, Electronics &Art) in  Albuquerque,  the theme, Machine Wilderness, provided a forum for global discourse on the blending of art, technology and nature. What was traditionally considered knowledge is no longer the same.  For example, the installations at ISEA or the Denver Art Show (2010) became the space in which dialogue created an awareness of human induced distinctions and a transformative thread of memory.  One biocultural project threading DNA data through audio and imagery captured emergent patterns that became the art. When installations draw not only inquiry from artists but scientists as well, this network of physicists, computer experts, (lab directors of Los Alamos) and others view it with an intention to continue answering questions that are currently unanswered.

Colleges and Universities are responding to this by dissolving the lines between artists, designers, scholars and inventors.

At the University of Denver, new majors have emerged in the computer sciences. Dual majors, cross disciplines appeal to students who "seek to work in spaces beyond what is already defined & familiar." For instance, in the Emergent Digital Practices (art degree) :

The intention is to infuse (EDP) the digital practices of E-literacy with critical approaches to cultural technologies, media philosophy, the investigation of electronic and new media arts, and studies in science fiction, trans-global politics and science.

DU's Department of Computer Science is focused on innovation. The constructivists programs merging technology with creativity, left brain with right brain, art-speak with techno-talk, analog with digital. Students utilize skills, developing new technologies that are changing the ways humans perceive, think, and communicate.  They too are meant to use the platform of edutainment to critique trans-global politics, forums for scientists to explain themselves to other fields of knowledge and for imagination to challenge the pillars of reality.
I did not just find this on the Denver website, I am fortunate to be in constant conversation with my uncle, a professor whose fields of knowledge are not easy to define.

Teachers are no longer responsible for what students learn, they are meant to provide a safe platform for learning to begin while allowing and expecting them to excel as much as they can.  This is a difficult task, not every student will excel as much as they can.  So, I conclude wondering, in the push towards the Common Core what do we keep in education and what do we leave behind?

{Ask A Teacher} Help! I Want to Use Social Media In My Classroom! 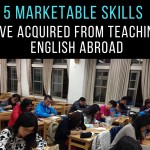