I am thankful for my childhood, my family, and all the experiences I have had. I catch myself sometimes making a reflexive mental diagnosis for students who come from broken homes and bad influences.; judgments regarding why work doesn't get done, why they behave a certain way, and so on. Despite what education attackers want as the overriding narrative to explain student struggles (failing schools, overpaid/overprotected  teachers, unions...)-poverty and school funding inequities (the real "status quo") prevail as the most correlative factors.

But after I mentally slap myself for having the nerve to make that mental diagnosis-I stop and do an assessment of my own childhood, and it goes something like this:

1) My mother was a sixteen when I was born.

2) My father was twenty, from the same high school, recently graduated and enlisted in the military during the Vietnam War (it was 1967). I was born on a military base in Georgia, far away from our home state of New York.

3) While there are pictures of my dad, in uniform, holding me as a baby-I cannot remember a day when my parents were "together" living as a couple.

4) When I was little, my dad would pick me up for the weekend, or have me for some extra time on holidays and summer vacations, and we would often hit several bars or visit with his friends where I saw and did stuff that kids shouldn't see and do. Today, as a teacher, if I suspected a student was involved in or exposed to the same-I would be obligated to make a "hotline" call.

So how is it I stayed out of trouble, got good grades, didn't have whatever served as child protective services investigating my situation, basically turned out okay with a beautiful family and what I would call (despite my wife's objections) a pretty good head on my shoulders...?

I had and have incredible people in my family, with a combination of depth in character and experiences not often found in this world especially in this day and age. While I don't remember my parents together, my dad was always there. Calling during the week, picking me up on weekends and whenever he could. To this day, my parents come together at my family events and talk, joke, laugh. I have never once seen them be unkind to each other ever. He has always been the most generous and gentle soul I know, with the funniest, raunchiest sense of humor. To this day, anyone who has ever known him or worked with him can't stop describing what a great guy he is and I always agree: he's the best man I know.

His father (my grandfather) was no different, and I recall stories he told of his childhood and youth that serve to illustrate how much this world has changed in a relatively small amount of time. They also serve as the foundation of character I had and try to create for my family. Character meant so much more in those days, more than what you owned and who you knew.

My great grandmother (grandpa's mother) taught in a one room common schoolhouse in Summerhill, NY, and my grandfather attended the Cortland Normal School located in a building called Old Main on the campus of SUNY Cortland College. In those days there was an honest-to-goodness constable who patrolled the county on horseback, staying with host families as he made his rounds through towns and villages and on the country roads through state forests. Gramp told of how the constable stayed with our family and how he would drop a scoop of wood stove ash into the constable's boots as a joke, and how the constable caught him out skipping school to pheasant hunt one day. Emerging from the woods onto the secluded dirt road, my grandfather found the constable there on his horse. The constable traded silence for Gramp's promise to lay low and keep their meeting a secret.

It was the same constable who years later would meet my grandfather at the train station when he returned from World War II. Having traded up the horse for a car, the constable took my grandfather out for a welcome home drink.

Of his time as a soldier in Europe, one story stands out. It was a story of the German prisoners being held near the end of the war, some of whom my grandfather was in charge of guarding. The officers, he said, were arrogant-believing themselves above even their captors (while likely feeling grateful they weren't being held on the eastern front in Russian camps where the Red Cross wasn't allowed in that often and Geneva Conventions weren't binding principles). The regular soldiers, on the other hand, were happy to have been captured for the most part. Most having been in miserable conditions and often not agreeing with the Nazi agenda, they found themselves better cared for and fed at the hands of the Allies. My grandfather's charges liked being assigned to him very much, for whatever reason, and he could often grab a quick nap(like the German prisoners waking him quickly if a superior officer approached). Gramp said when it came time for duty assignment and those German soldiers would practically run to his side he had to tell them to "cool it" or the jig would be up.

My grandfather was that kind of guy.

These stories would sometimes be shared from the front seat between my grandfather and father, as me and my younger brother sat in the back seat driving the roads between Moravia, behind Fillmore Glenn State Park, and back to my grandparent's house on Lake Como Road. It would be a warm summer Sunday after church, with a cheap twelve pack of Genny or Old Mil in back with us and empties got handed back, refills handed up. My grandfather had worked for the state planting trees in some of those out of the way places and he knew exactly where the nudist colony was. Driving with his left elbow out the driver's side window and the can in his hand dangling just out of view, his right hand holding the wheel and a well-chewed cigar, he would say, "Keep your eyes open boys, you might see something."

When I think of my childhood, there is no regret, no shame. These rides happened after being sent to church with my grandmother where (as it goes in tiny little baptist churches) we learned how sinful we were and how to save ourselves. Some praying, a car ride, and some chicken barbecue usual had us whipped right into shape, and I kept good grades, good attendance, had a room full of books and weekends full of outdoor fun. When I had read all my books, I got into my mother's (a few of which were maybe too "mature" for me). I grew up listening to Joplin, Croce, Hendrix, and the best worst country music there is- staying out and up late doing things that I will publicly say kids should never  do and privately say that this is part of what made me who I am.

For the experiences, my family provided me with in the past, and what my family provides me with today- I am most thankful. As I look at and listen to kids today I know that they have probably done less of the stuff most people would consider near-horrifying for children, but I also know that their real struggles have less to do with failing schools and failing teachers. They are losing out on the economic, social, and moral stability this nation once provided. They are missing out on  the richness of experience and emotional security that comes with true bonds with those closest and near. Knowing well the world outside your school is one thing that helps you succeed in school. Experiences with people, places, and things, built upon a foundation of respect and character, feed success with people, in places, with things.

The so-called "free market" is bleeding our nation of these things, and now it has turned it has sights upon our schools. Our job is to save them. 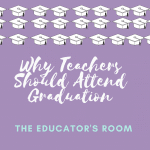 Why Teachers Should Attend Graduation
« No One Should be out of Place at the Opera
10 Tips: Running a Political Debate »