Last night the viral sensation, Hair Love the American animated short film written and directed by Matthew A. Cherry, and co-produced with Karen Rupert Toliver won an Oscar for the best animated short film and the internet shouted. Not because the film was done perfectly (it was) or that it represented for black girls what's sometimes missing- the beautiful representation in an animated film, but because in a world where black girls are over disciplined and overcharged as proven in the groundbreaking book, Pushout: The Criminalization of Black Girls in Schools it was nice to see a positive story receive recognition.

According to Monique M. Morris, Society’s deeply entrenched expectations of black girls has led to a ritual whereby these young women are often mischaracterized, and mislabeled because of how they look, dress, speak, and act especially in schools. From the example of the police officer violently removing a black girl from the classroom over a cellphone violation to Kiera Wilmot being removed from her high school over a science experiment, there has been continued outrage over how black girls are disciplined.  A report from the Department of Education Civil Rights Data Collection, from 2013-2014, 20% of female preschoolers were black, but black girls made up 54% of female preschool children with one or more suspension.

While this short film is short to blossom into other opportunities and dialogues, it's important that as educators show our students this film to now only open up dialogue, but to also understand the social implications for more representation for students. Some of the initial reports from reports such as National Women's Law Center Report, "Dress Coded: Black Girls, Bodies and Bias in D.C. Schools" found that the dress code policy enforcement unfairly targeted black girls. To help us have this dialogue starts with schools examining the data around discipline, identifying the underlying bias and reexamining policies that can unknowingly target one type of student population. 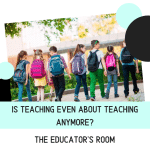 Is Teaching Even About Teaching Anymore?
« Shaking Up the Literary Canon
Standardized Testing's Negative Affect on Math Education »