Last month the rural Vermont high school in which I teach at hosted a well attended LGBTQA prom as a culminating festivity for the 9th Annual Queer Allied Youth Summit. It was a first of its kind for our county, our community and our school; its success lay in the hands of a few teachers, a classy administration and coordinated activism from a large body of students. (The acronym: LesbianGayBisexualTransgenderQueerAlly)

Senior student activist, Tommy Lockamy, began planning the weekend-long summit with two educators who advise the largest Gay, Lesbian Or Whatever (GLOW) public school club in the state. The club meets during a school day advisory time to hang out, talk or plan activities keeping in mind the idea that everyone is welcome, no one is turned away. This union school has not always been so inclusive nor have the sending schools embraced LGBQTA. In an effort to move beyond mere tolerance of gender and cultural differences GLOW actively planned a two-month program for raising awareness and acceptance of diversity. Lockamy emphasized that the planning was crucial to the smooth transition towards community support of an untraditional and radical prom, "if it wasn't for those student-led workshops this dream of a prom wouldn't have been possible."
Students took a school calendar, blocked out 20 minute advisory times over the course of two months and invited statewide activists, students, educators, community members to came to present on a variety of topics: examining the science of gender, laws and rights, suicide, social media to name a few. Students made videos shared thru YouTube and other channels highlighting relativity of discrimination on a personal level. The principal, Brian Schaffer approved and facilitated the shift in the daily schedule to accommodate the workshops.
With a foundation laid GLOW had less than two months to actually plan the weekend long summit and prom. Fundraising was a necessity and social media played an integral role in connecting students to private donors. It is unusual in a rural public school for students to be invited students to attend private fundraisers so it raised the level of excitement for club members who took the opportunity to dine and converse in public about their work. In conversation with Tommy I learned that anonymous donors, delighted with the courage to be "out" in school helped drive the $3,000.00 collected from private donation, Gofundme.org and other sites.
Prior to the May summit students attended an Outright Awards night. GLOW was recognized statewide as a QSA of the year, Tommy was given outstanding activist and Principal Schaffer received the educator of the year award. The accolades motivated GLOW to set up a spectacular summit. Out On The Town was the titled event of the prom with the theme being "big city spirit small town heart". Most of the decorations were made by hand during club advisory times and long sessions after school. 200 students would attend the summit weekend. 170 would travel from other schools to attend the lock in, the workshops and opportune moments to engage in song, dance or an organized "wave your freak flag". When asked about a most magical moment tommy Lockamy replied that, "going out of my comfort zone, dressing in drag with an entire crowd just wanting more and more pushed me to say something inspiring."
Lockamy also felt that the speech, opening the summit, made by Principal Schaffer was so welcoming and bold that several students attending from other schools commented on how fortunate it was to have a supportive and forthright administration. Tacit compliance with tolerating diversity does not protect students from bullying. Students need adults to make these bold steps with them. Next year the administration plans to support gender diversity by designating several bathrooms in the building as gender neutral.
Not a negative word has been printed in local papers or editorials or on town social media. With a successful summit and prom behind them GLOW spends its time writing and recording thank you videos to all donors and volunteers. It is preparing to attend a summer PRIDE march in New York City. The graduating seniors leave a legacy of supportive active underclassmen who will continue welcoming new friends whomever or whatever they may be into the inclusive community. 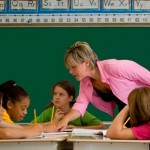