How Did Students Feel About the Presidential Inauguration? "I Feel Safer Today, Mrs. Brown." | The Educators Room

I have incorporated every presidential inauguration (regardless of who is elected) into my social studies classroom: seven ceremonies and five distinct leaders throughout my tenure. The transfer of power witnessed by adolescents is truly civics education in action.

Every inauguration includes the usual pomp and circumstance, celebrity appearance, and political promises. Although we discussed Lady Gaga's performance and Bernie Sanders' iconic mittens, I have never heard teenagers express their feelings about the process in the ways they did during our discussions on January 21, 2021, the day after President Joseph R. Biden's inauguration.

I have never heard teenagers express their feelings about the process in the ways they did during our discussions on January 21, 2021, the day after President Joseph R. Biden's inauguration. Click To Tweet

The words hope and change echoed by young people in my charge stung me in their accusation of adult misbehavior. Generation Z calls on us older folk to do better. Having witnessed our divisiveness and hate-filled words, they have judged their familial and political leaders harshly. Children always learn from examples--recently, however, adult Americans have modeled behaviors that children have been told are incorrect. Adolescents marvel at the misinformation consumed so readily by so-called educated elders. They declare that conspiracies and half-truths would not so easily sway them--claiming their tech-savviness is armor against social media traps that they have navigated since elementary school.

For many students, Biden's inauguration was a turning point, a time of firsts. Biden the oldest elected president; Kamala Harris the first female and person of color elected vice president; and Amanda Gorman, the youngest poet to speak at such an event. These milestones are evidence of change and hope for America's youth.

More significantly, the words echoed on January 20, 2021, on the Capitol steps, the people's house, were drastically different from those shouted on January 6, 2021. In just fourteen days, our children witnessed udder chaos and complete calmness at the same location. This dichotomy is the whiplash experienced by impressionable young minds. Amanda Gorman explained the issue in her inaugural poem, "The Hill We Climb:"

But while democracy can be periodically delayed,

it can never be permanently defeated.

Gorman's words, so beautifully crafted and presented, are the definition of humanities education. Her poetry is the promise of America. Her message of citizenship and forgiveness is the moral compass we all need to follow.

As a parent and an educator, the urge to protect is strong. So when one of my students declared that he felt safer today, I was taken aback. These kids have experienced too many "adult" issues. This generation, experts at facing fear, has endured so much. They know how to cower in cubbies and corners of classrooms, silently rehearsing their possible deaths. They have witnessed looting and rioting caused by extremists with many excuses and justifications. They have evidence of police brutality, causing them to lose faith in institutions and authority figures. And, they have sacrificed a year of activities while dutifully wearing face coverings and learning 400,000 Americans (and counting) have perished due to a pandemic that continues. They are fatigued from living in historic times.

As the instructional leader in the actual and virtual classroom, I attempt to connect and teach my sophomores and seniors more than history. I hope that Amanda Gorman's words become the positive change our children deserve. Of course, Gorman expresses this aspiration best in her inaugural poem.

We will not march back to what was

but move to what shall be

A country that is bruised but whole,

We will not be turned around

or interrupted by intimidation

because we know our inaction and inertia

will be the inheritance of the next generation

Our blunders become their burdens

But one thing is certain:

then love becomes our legacy

and change our children's birthright.

Teachers feel responsible for children's' sense of security. Educators consistently value Maslow's hierarchy of needs. We appreciate that students need trust and that the most effective teachers earn that trust through engagement and connection. Let's hope that our students continue to feel safer in our America. 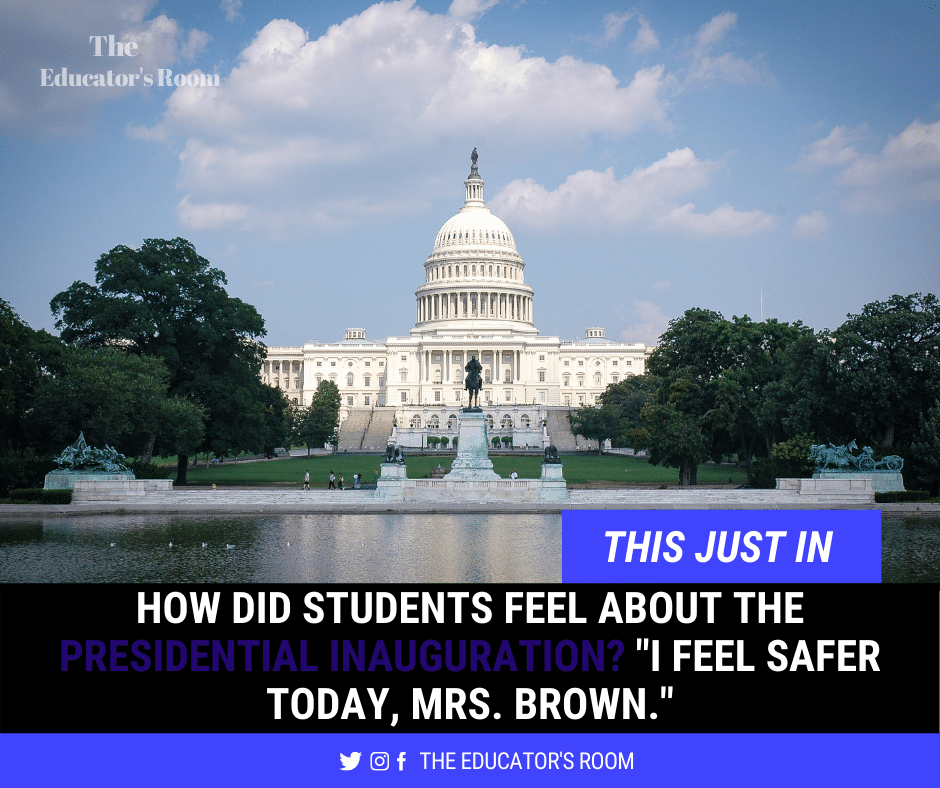