As folks affix their Trump and Biden signs in their yards and argue precipitously over politics with their neighbors, claiming how this is the "most important election of their lives" and how the other guy will "ruin America," I'm still thinking about that number.

Twenty percent is roughly the number of Americans who have historically turned out to vote for their local elected leaders, including their school board of directors.

Twenty percent is approximately the number of folks who voted for me last year (or, moreover, my opponent who trounced me) in last year's local elections when I ran for County Treasurer.

Twenty percent is roughly the number of voters in Fulton County, Georgia, who will cast their ballots for Franchesca Warren, CEO of The Educator's Room, who aims to bring a teacher voice to serve as a member of her local school board.

And, if you're thinking 20% is hyperbolic, some political theorists think that statistic is too high - and that 10-15% is more representative of the actual turnout.

In fact, in some of our largest school districts, like New York City, Philadelphia, and Baltimore, the mayor appoints the school board. They are not elected.

In our self-proclaimed "world's greatest, most powerful, legendary democracy," American citizens have almost the same likelihood of meeting a voter who votes for school board races as we do of meeting someone who, according to the National Safety Council, will die of heart disease (1 in 6) or cancer (1 in 7).

Which begs the question - is our democracy under equal, dire straits? Possibly.

Those leaders elected by the 20% are the same folks who steer the course of one's school funding and resources, curriculum, direction, and leadership. Most notably, they're now the same individuals making the decisions on how and when local schools reopen in the COVID-19 age - and whether that return is online-only, hybrid, adapted in-person, or pretending as if nothing has changed.

Indeed, as students, parents, teachers, support staff, and administrators look at the many possibilities and face a rollercoaster of emotions in returning to school, it's their local school board making those ever-important decisions. It is the local school board that is more directly affecting their families than any other political race. The. Local School. Board. Is. Most. Directly. Impacting. Our. Lives.

This begs the thought - the "most important election of their lives" isn't on November 3rd. It already occurred last year - or 2 or 3 years ago.

There aren't many things people with diverse political opinions agree on much anymore, but consider this: Eitan Hersch's book Politics Is for Power makes the same argument that progressive Ezra Klein and conservative Ben Shapiro both corroborate - if you want to change your community, you need to get involved in local politics. Or at the very least be voting in those elections. Heck, even Ben & Jerry's ice cream is in on the action.

But their words ring with the same intonation that former Speaker of the House Tip O'Neill's 1982 maxim that "all politics is local" - and yet, since that date, voting in local elections has continually decreased.

I have no data to support my claims, but that's probably for two reasons:

1. The opportunity cost of running for local office

According to the National School Board Association,  61% of school board directors are volunteers and unpaid, while another 28% receive a stipend of less than $5,000. All this for a job where 16% work 40+ hours a week, while roughly 1 in 4 work both 25-40 hours and 15-24 hours. I was amazed to find that 71% of school board members did NOT have children attending the schools they served, mostly because the time required to serve the position could largely only be met by retirees. If time is money or if time is spent with one's children, serving on a school board is its anathema.

On January 20, 2017, the day of his Inauguration, President Trump filed paperwork to begin running for re-election. It's convenient to make the President a scapegoat in this (and many other) situations, but many of his behaviors prove to be a consequence and not a cause of our own social behaviors. We are so drawn to the monarchical nature of our Presidential races - and how much money, time, and airway space they take - that we hardly have the wherewithal to muster enough breath to participate in anything else. While a growing number of voters - maybe upwards of 75% of Americans in 2020 - vote in the Presidential Year Elections, the numbers are dropping in the poorly named "Off-Year Elections," notably the odd-year elections when no federal races take place, which, unsurprisingly, is when most municipalities elect their school board leaders.

THE SOLUTION IS PEOPLE-POWERED

How do we encourage more than 20% of people to participate in these crucial elections? Here are 10 ways to go about doing that:

As your neighbors squabble over the upcoming 2020 Election, remind yourself that they will probably vote in this crucial campaign. But the work has just begun, and the most important election is always the next one. Our students, our schools, and our democratic-republic deserve nothing less. 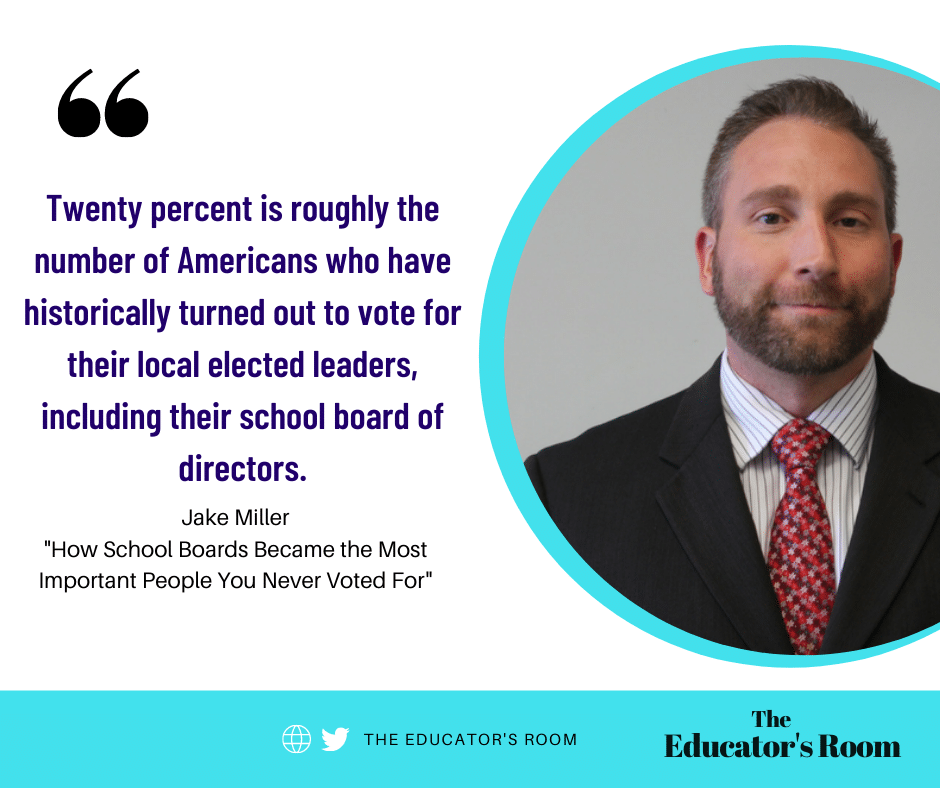 [Opinion] Barack Obama: A Role Model for Teachers and Students
« Finding Your Light in the Dark: Positivity During Pandemic Teaching
Teaching in 2020: Where Everyone Gets a Choice, Except Teachers »