Lawyers often quote the adage, “Never ask a witness a question unless you know the answer.”

That wisdom should have been shared with officials from the Massachusetts Department of Elementary and Secondary Education  (DESE) who were forced to remove a test prompt question from the 2019 state standardized test because of complaints by Boston school administrators.

The controversial question on the Massachusetts Comprehensive Assessment System (MCAS) for 10th graders centered on a passage from the novel The Underground Railroad by Colson Whitehead.

The award-winning novel details the harrowing journey of Cora, a runaway enslaved female. The passage from the novel selected for the test question is set in a South Carolina town that celebrates the execution of captured runaways. Despite this danger, resident Martin Wells agrees to hide Cora in his attic. His wife Ethel, however, expresses her concerns in an exchange taken from a longer passage:

Ethel looked at Cora for the first time, her drawn face framed by the hatch.

“The girl is coming by and by,” she said. “If she hears you, she’ll turn us in and they will kill us all. Our daughter and her family arrive this afternoon. They cannot know you are here. Do you understand?”

“You stupid thing. Not a sound. Not a single sound. If anyone hears you, we are lost.” She pulled the hatch shut.

On the MCAS, 10th graders were asked:

“Imagine how the story might have been told differently if it were written from the point of view of Ethel. Create a journal entry written by Ethel reflecting on the events that happened in the passage. Your journal entry should provide insight into Ethel’s thoughts and feelings, as well as her relationship with Cora. Be sure to use what you know about the characters, setting, and events from the passage to develop your journal entry.”

Students are often assigned a prompt from literature with instructions to continue a narrative as part of evidence-based reasoning, but did the MCAS test developers fail to recognize that such a prompt could lead students to accept, to support, or to allow the agencies of slavery?

The evidence from this passage, that Ethel thinks that Cora “smells” and is “stupid,” forces students to make some difficult choices. For example, in their responses, they must channel Ethel, who thinks about the inconvenience or dangers of helping a runaway enslaved person. The evidence of Ethel’s hostile feelings, “aloft on her fury” towards Cora, with her face “set in a grimace” makes Ethel unsympathetic. Students could justify her decision to turn Cora over to the “nightriders” (slave catchers).

When the Boston Globe contacted Whitehead about the use of the passage as a prompt, he was appalled.

“What kind of idiot would have students imagine the rationalizations of a racist coward who shrinks from moral responsibility?”

Whitehead made clear that other characters would have been much better choices.

Asking students to offer a point-of-view that differs from the original text is often used to test student comprehension, but that practice does confound an author’s intent. Asking a student to create a different point-of-view can distort the original narrative.

As if to make this same point, Whitehead himself noted in an interview with The Boston Globe, “Inhabiting characters like Ethel caused me great emotional distress.”

Not to mention the distress felt by the 1,100 students who had responded to this prompt a year before during a 2018 trial test. Their open-ended responses for this trial had been validated by a committee that, ironically, was charged to look for possible biases. Test security measures kept any concerns under wraps until the same question was rolled out again this April.

Because of the concerns raised by school administrators in the Boston area, state officials from the DESE decided this question would not count toward students’ 2019 test scores. Students were told to “skip” the question.

That probably was the right decision, especially as Whitehead laid the blame on DESE.  He told the Boston Globe, “Whoever came up with the question has done a great disservice to these kids, and everyone who signed off on it should be ashamed.”

At best, the DESE officials did what legal counsel would have advised against; they asked a question without anticipating the answer.

But the 1,100 answers from the earlier test trial that DESE officials graded and approved say otherwise. 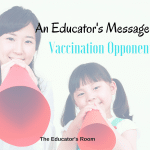 An Educator's Message to Vaccination Opponents