In part one of this series, I shared my story as a mother to a son with Asperger’s Syndrome and my “wish list” for educators who work with such students.   Although I am a teacher, my training in working with Asperger’s children was on the job experience, as my now almost twenty-year-old son has struggled his entire life with this disability. But, as I mentioned in my previous post, there is much more to the story; much more than I could share here. Let me tell you the end of the story and offer specific strategies teachers and parents can use to help Asperger’s children and teens learn appropriate social skills.

By the time my child ended his eighth-grade year he was miserable, had no friends, was depressed, anxious, and created conflict no matter where he was.  He was not responsive to therapy even though we had found a counselor who was working on her doctorate degree and had clinical experience treating teens with Asperger’s.  In short, he did not seem to want to get better, no matter what strategies were presented to him, no matter how much we reasoned with him, no matter how much we tried to explain that things would get better, but that he had to do his part.  In retrospect, I get it now.  He was so miserable and wanted so desperately to escape and avoid his pain.  To talk about the reality of his chaotic life was too much.  In addition, those with Asperger’s often exhibit immature emotional and social abilities and age-appropriate coping skills. So even though my son was rather large for his age, was well read, and appeared to be an extremely bright and articulate young man, his emotional maturity was well below what would be expected to be “normal” for his age.

It took four years for my son to make noticeable progress.  By the time he graduated from high school at the age of eighteen, I barely recognized him. Gone was my awkward son who just a short while ago seemed to be mad at the world, seemed to agitate anyone and everyone, and who was not functioning in most social situations.  He attended a four year private high school where the class sizes were extremely small, where he was able to make a fresh start, where he was around other teens who shared his passion for knowledge and for developing their intellect.  The academics were rigorous, the expectations were high, and the school worked hard to foster a structured, loving, and accepting community of learners.

My son thrived and blossomed in this environment.  He just finished his first year of college and did exceptionally well.  There are still bumps in the road, but I am amazed at his progress in just four years.  I share this to offer those of you hope and encouragement if you are struggling with parenting or educating a child with Asperger’s.  The road you travel is long, lonely, and seems infinite.  Every child’s story is different, but here are my suggestions for teachers (and parents too) based on my experiences.

Recommendations for Working with a Child with Asperger’s 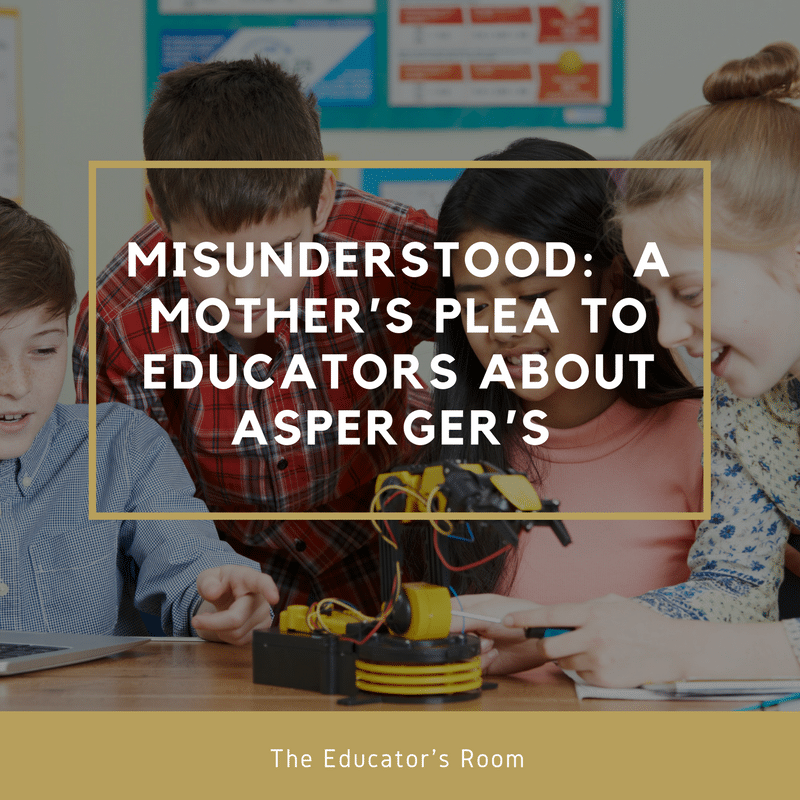 Being the Change From the Inside Out