In September 2016, seven students in the Detroit school system filed a lawsuit against Michigan governor Rick Snyder and other state education officials. In their complaint, the students allege that over the last several decades, there has been systematic disinvestment in and “deliberate indifference” to the Detroit schools, which has fundamentally denied Detroit school children a basic part of their education: literacy. That disinvestment and indifference have been the outcome of the charter school “reform” system designed by Betsy DeVos. You may recognize that name. She is president-elect Trump’s nominee for the next Secretary of Education.  Her goals for education are at clear odds with the reality of her plan’s results. Now, Gov. Snyder and the state of Michigan have argued that the case should be thrown out because students have no “fundamental right to an education.” The problem is, the State of Michigan could be right, and with DeVos about to head the Department of Education, that could spell disaster for schools across the country.

Is there a Right to an Education?

Under current interpretation of the Constitution, there is no right to an education. The Supreme Court of the United States clarified this in the case San Antonio School District v. Rodriguez, in 1973. In that case, the question was whether the Texas public education system violated the Equal Protection Clause by allowing districts to have different funding structures (resulting in poor districts having very bad schools, and rich districts, the opposite). The Court decided the funding system did not need any scrutiny because there is no fundamental right to an education in the Constitution.  Therefore, because most states allowed districts to differently fund schools, there was no evidence of discrimination.

It is true that the US Constitution does not address education. Because it is not laid out as a protected right for citizens, the federal government has no obligation to provide for a federal-wide system of funding or standards. In tradition, since the colonial era, states have managed education. But each state decides what priority (funding, etc.) it will give to education.  This is a social contract (but not a protected right) that was encouraged by the likes of Thomas Jefferson, who imagined that states would strongly desire to educate its citizens in order to have optimum civic participation. Some states declare education a right in their state constitutions, and some don’t. Michigan, for example, only declares in Article 8, Sec.1:

Religion, morality and knowledge being necessary to good government and the happiness of mankind,
schools and the means of education shall forever be encouraged.

Like many state constitutions, the Michigan constitution goes on to direct the state legislature to provide for a system of public schools for its children. But that provision was transformed starting in 2012 when the state put Detroit under state management. In came Betsy DeVos and her organization, American Federation for Children.

What Happened in Detroit?

Under a series of “emergency managers,” Detroit public schools has experienced the largest overhaul of any district except New Orleans after Katrina. That overall was based on a design highly influenced by Betsy DeVos’ plan to funnel public education funds into a charter school system. Using the term “school choice,” reformers declare that removing funds from hurting public schools and moving them into charters and vouchers will benefit students. But the opposite has happened.

Over half of all Detroit students now attend charter schools. But though public education funds go to those schools, most are run by for-profit charter systems. As David Arsen, an education policy professor at Michigan State University said, the system was the “Wild West.” The charters were giving out sneakers and computers to entice students and their parents to get in their doors. The more students they could acquire, the more funding they could claim. Charters do not need allow their teachers to unionize, resulting in incredibly low salaries, terrible working conditions, and teachers who may not even have degrees in the subjects they teach. The charters are not managed by the state, nor were they accountable to the same systems the public schools are. Detroit now ranks among the lowest reading scores in the country. The students indeed have been deprived of a true education and literacy. The same thing happened in New Orleans in the years following Katrina. Eventually the state of Louisiana had to take over the management of the all-charter system in New Orleans and has poured significant resources into it bring it up to par with the other districts in the state.

So far no such effort is being made for Detroit schools.  Many educators and policy makers believe Detroit is on the edge of becoming an all-charter district. The disruption and dysfunction in the system continues to harm the students in that city. Many go from public -- to charter -- to private schools in succession because of the constant changes taking place. No true investment in resources and improvements has been made to the actual public school system, giving more argument to those who believe it should just be completely done away with.

Who is Betsy DeVos?

Betsy DeVos (née Prince) is the billionaire daughter of industrialist Edgar Prince and the sister of Erik Prince, founder of the private military corporation Blackwater USA.  Her husband, Dick DeVos, is the son of Amway co-founder Richard DeVos and served as CEO of the company for ten years. DeVos ran for governor of Michigan in 2006 against Jennifer Granholm, and Betsy DeVos served as Chair of the Michigan Republican Party for four years. The DeVos’ have contributed significant funds to Republican causes and to Donald Trump’s campaign. None of this would be surprising about a possible nominee of a Republican President. What concerns many in Education is Betsy DeVos’ history of advocacy for vouchers and charter schools in place of public education.

Betsy DeVos has been a significant funder and policy developer of “school choice” options for years. Through her Alliance for School Choice, and her American Federation for Children, she has worked with lobbing entities such as ALEC (the American Legislative Exchange Council), the far-right, pro-corporate lobbying entity that has designed many recent far-right legislation in states across the country. DeVos favors using public school funding for vouchers. “Vouchers” is a simplified term that means “giving public funds to private religious schools.” Couched under the terms of “school choice,” this process funnels public tax-payer funding meant for universal education to private religious schools by giving parents “vouchers” to send their kids to the latter (to escape bad public school systems).  The religious schools are under no state accountability, not required to hire certified teachers, and not required to provide the civil rights of, or an equal education to, all children equal to what public schools must provide. Charters are a different situation. In the Detroit version designed by Betsy DeVos, public schools lost funding to charters. But those charters, though they are called “public,” are most often run by for-profit companies. The goal then is profit, rather than an equal and accountable education. This results in huge enticements for enrollment, but no requirements for certified teachers, education standards, or other accountabilities that public schools must meet.

What does this mean for Public Education in the Trump Administration?

The only answer at this juncture is: We don’t know. If Betsy DeVos is confirmed by the Senate, it will be clear that the Republican majority is on board with Donald Trump’s belief that not only do children not have the right to an education, but that public education is not even necessary. How DeVos could transform the federal Department of Education is unclear. Federal regulations on schools, including the protections of student civil rights, could fade. Funding could definitely be affected, depending on what kind of proposals DeVos submits to Congress. Whether or not charters are given free reign, even states that so far resist their influence is only a question at this point. Whether the push for vouchers continues to remove funds from public education is only supposition right now. Whether Trump’s Secretary of Education follows through with his campaign promise to get rid of the Common Core standards remains to be seen.

What we do know is what has already happened in Detroit schools, as influenced by Betsy DeVos. What we do know is that education is what equalizes human beings, and so far the GOP goals for education have been to un-equalize access and opportunity, and to strip the resources from public schools.

What we also know is that the Founders of this country possibly made a fatal error not enshrining education as a fundamental right for the citizens of the United States. These next four years may show us this truth in very harsh ways. 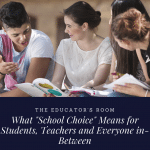 What "School Choice" Means for Students, Teachers, and Everyone In-Between 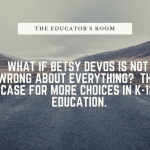 Considering the Case for Betsy DeVos
« Teaching Skills for Survival in Dystopia
Can Public Schools Survive the Era of School Choice? »