I have always let my kids do things and play games that I wouldn't generally suggest for other children-but it's with a guided purpose. In fact I encourage my children to get into those games and discover what happens when you push conventions, rules, and the boundaries of those virtual worlds.  So when my daughters and their friends started playing “Pokemon Go”, I started to “play” myself. While I had heard and have seen that the actual game-play is not that impressive, my goal is to know "what's up", take advantage, and make sure that games my kids play are tools for their learning more than they are eye-candy drawing them in for mindless hours-turning my children into the tools. I feel the same about the entire world they experience, from the time they are born to the time they leave the nest: control yourself, control your experiences, don't be controlled.

Along that line of thinking: when my girls were just itty-bitty things, we would take family trips to parks and playgrounds. The giant "big toys" or slide-swing-monkey-bars-fort structures were (and are) one of my favorite things about parks and playgrounds. Boy, they have gotten fancy! Nothing like they were when I was in elementary school. But my mind is weird...I look at them like I would a tree that begs to be climbed. There are no rules...I don't care where the steps are, which way the slide goes, that hanging down on the rings and swinging is how to cross from one side to the other...who says??? Why not scale to the top and balance-walk across the beam above the rings? So as a dad, wanting my girls to see things the same way, I showed my girls how to "just say no" to the steps and scale right up the side; to get a foot-and-hand hold, boost up to the outside framing,"shimmy" along the side of the fort structure; to climb up the slide instead of just going down... I would be holding my tiny girl up, using one hand to guide hers to a hand-hold, moving a foot carefully to the next stable foothold, making grunting noises to demonstrate/prompt effort. This was really funny when an impromptu "pro-wrestling" match broke out between me and my cute toddler with a "binky" in her mouth (making grunting noises and staggering towards me with grasping hands) saying "kickee butt, kickee butt?" (Her version of my pre-match declarations that I was going to "kick her butt"). She generally broke free from some legendary holds (the "sleeper", the "cobra clutch"...even a "figure four leg-lock") before finally pinning me for a three-count and having her arm raised in victory. I played multiple roles: dominated opponent, ring-side announcer, obnoxious front-row fan, referee...

Now, of course of course all this had to be dialed down when other kids were around, and there was an adjustment phase and a few conversations with recess monitors when school started. But one of my proudest moments was my oldest, at like 7 or 8 years old, dragging a little toddler playschool scooter up the ladder to the top of a play-fort we have in our backyard in the middle of winter and then "skooching"(sp?) and ducking down through the arched opening to ride that scooter down the slide, the kind that has a couple little roller-coaster dips in it. My wife said "Daniel, would you look at what your daughter is doing?" and I with my coffee looked up onto the hill in our backyard as she was trying to duck through that opening, and took a sip through my smile.

"Should we stop her?" Jen asked.

Well, it was kinda funny: "zoom" down that slide and an almost immediate face-plant, spread-eagle, into the knee-deep snow. When she lifted up her hooded head she had that snow-caked face look. That's when I threw open the window, whooped and cheered. Of course, it was about a month later we learned about her heart condition and the fact that there were likely several surgeries in her future.  So yes, I allow my girls to play some crazy games and do some crazy things- but I refuse to let them be constrained or victimized by the constructs of the world, or popular media and technology, or even playground design.

But back to "Pokemon Go."

Some of the downsides I’ve seen are ones you’ve may have seen as well: people wandering various locations important to the game with heads down and eyes on their phones; getting in car accidents because they make 13 year old Poke-decisions while being 28 years old and behind the wheel…These are "gamers" who have allowed themselves to become victims of the game. They are so drawn into play that they disconnect from real life and some important and interesting things around them. I don’t just mean red lights, stop signs, and pedestrians because the Poke-world and the rules-of-the-road should never collide (literally and figuratively) anyways. I mean important places, historic locations and monuments bearing dates, names and inscriptions that tell those who come important things about where they are and where they live.

But what if the poke-hunter was either motivated to or given an assignment to learn something that was in their real world, not just the one behind the screen on their phone? I know, leave it to a teacher to try to turn mindless fun into a learning experience. That’s probably why I joined the Poke-team regarded as the dark, evil “Slytherin” of the game-team “Valor”. So I’m working on ideas to add some awareness and learning to this fun. In the meantime, look for Pokeman “gyms” getting taken by characters with names like “DoyrHomework” and “Ustaynskool”. Forgive the spelling, and come join the team. I imagine a legion of team Valor teachers prompting waves of students interacting with their communities more effectively. 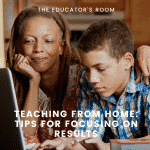 Teaching from Home: Tips for Focusing on Results- One Teacher's Reflection

One Future of K-12 Education: From the Factory to a Personalized Model
« Small Things to Create a Great Community
Time to End Students' Need for Instant Gratification »