I became a political educator early in my career. I was hired after a 3 week strike over an increase in class size to between 40 and 45. I was hired as one of many new teachers to lower class size when the union and school board decided to extend the old contract. Unfortunately, just before Christmas vacation the mayor, who was no fan of teachers, decided that the contract extension was to end on January 1. Schools were to remain open and would be staffed by administrators and substitutes, but there was no education actually going on. This situation dragged on for two months with the state of Pennsylvania deciding that although most students had missed close to three months of education, they would be credited with a full year and be promoted. This is when I became a political educator.

Why is it important to be a political educator today? The politicians who are making the decisions about how schools should function have none of our expertise. They are making decisions about what should be in the curriculum that you teach. In Colorado, AP American History is under assault because members of a local school board feel that it is not patriotic enough. The regents’ exam in New York may be changed so that World History will only go back as far as 1750 and social studies classes may be replaced by hybrid tech/social studies classes. Many states want to change science texts to include creationism as a scientific concept. Parents as well as politicians object to common core math standards because they think that math should be taught the way they learned it. They totally ignore the fact that STEM jobs need mathematical thinking not basic operations.

By now you are probably wondering how you can be a political educator when you are so overwhelmed by what you have to do in the classroom. It’s easy if you stay informed and share facts. Attend school board meetings when you can. It is important to know firsthand what information is being conveyed by those in power. If your school has a PTA/PTO, get to know the officers and see where they stand on policy. Before each election (local, state, and federal), find out where the candidates stand on education funding and share that information with everyone you know who cares about public education. If you are in a right to work state join any association available (content area groups, non-profits that support public education etc.) so that you can stay on top of the issues.

We are at a turning point in public education and I encourage you to be part of the conversation so that every child in America receives a quality education.

Educational Reform: It is Time for Real Change 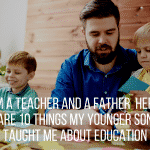 I'm a Teacher and a Father,Here Are 10 Things My Younger Son Taught Me About Education
« What to Expect During a Manifestation Determination Review
Don't Be THAT Teacher: Make a Positive Impact Instead »