My first “Rural Schools” journal entry described a slice of our country- America and how the last few decades have impacted that quaint little world. It ain’t quite Walton’s Mountain, but it might be the closest thing you’re going to find in today’s world, and nearly every character there that you might imagine in your mind is someone that really exists. I can find that farmer who is up with the sun working, and is working when the sun goes down and even later. There’s one down the road that crops about half our property in return for a bucket-load of soil every couple years and for turning over our gardens in the spring plus maybe some other heavy equipment required a task that I just don’t have the equipment for.  I teach with another farmer. He’s working in the classroom all day long as well as working his farm hard on the bookends of his day. Big, tall, broad shoulders with hands like slabs of beef- and having the biggest, softest heart you could imagine for such a boisterous giant (as well as being a huge smart-ass who can give a joke and take it just as easily) . He’s one of my girls’ favorite teachers.

There’s one down the road that crops about half our property in return for a bucket-load of soil every couple years and for turning over our gardens in the spring plus maybe some other heavy equipment required a task that I just don’t have the equipment for.  I teach with another farmer. He’s working in the classroom all day long as well as working his farm hard on the bookends of his day. Big, tall, broad shoulders with hands like slabs of beef- and having the biggest, softest heart you could imagine for such a boisterous giant (as well as being a huge smart-ass who can give a joke and take it just as easily) . He’s one of my girls’ favorite teachers.

I can also find that guy who can fix just about anything and has: bailed my butt out of a car breakdown by driving twenty miles for nothing more than to help. Then there’s the woman who knows every family around going back time untold and knows the married-in or born in connections to be cautious of when you are speaking in mixed company. Without a doubt, a couple of kids in your room have a step-parent that hooked up with this other family after a divorce from an ex who is a parent of some other child in your room, or at the same grade level...It isn’t always a torrid story involved, but “Watch what you say because you never know who you are talking to and who all they are related to” is new-teacher day-one advice anywhere, but especially in the country. And you think the “Walton’s Mountain” thing is some quaint cliche? I actually know someone who has a road named after her family. One of those country roads that winds to the tippy top of a hill where their family home and farm was. She’s my step-mother.

You would think that with things spread out so far and wide, it would be hard to get to know your neighbors, but that is the paradox: living in the country seems to make people know even more about their “neighbors” even if they are quite far away.  It’s like having an expanded and extended family. On my drive home from school, I start up the road that goes up a hill and connects to another road (that goes up another hill) that I live on. Along the way, I pass by a family rebuilding a porch. Sometimes you see the Amish working away at such projects locally this time it’s the combined forces of a couple local families. I’ve had kids come through my classroom from both families and the visiting father of one has come from pretty much the other side of the school district to help with the construction. I know where he lives because I’ve delivered my daughter there for visits, or their daughter back home (their youngest child calls my middle daughter “magical pony wizard” for some reason, and is thrilled to see her come-crushed to see her go). The father who actually lives at the construction site drove his heavy-duty tractor/mower here to my house a couple years ago when my mover was out of commission. The grass had gotten nearly hay-field high and repair on my own mower took some time.

On some weekend and summer nights, many kids, some former students, gather at my house on the hill to hang out, sing Broadway show tunes (in at least two part harmony...sometimes 3, with ukulele accompaniment), toast marshmallows...they either stay or get a ride home. The only real difference ends up being how much breakfast we make. Now let me say right away-I am nothing special. I can guarantee that there are at least three other teachers doing the same thing, and maybe twice as many parents who do this, or did this when their children were growing up- or will be doing this as there little ones turn into teenage ones. Some of those parents are teachers elsewhere.

Now imagine an area where you have three or four microcosms like this in fair proximity, and each has a little school of its own. By “fair proximity” I’m talking half an hour-ish by wide open paved roads with homes and farms loosely scattered along the way, maybe a little longer if you go from one school to another at total opposite end of the county. You can shave a few minutes if you get off the roads that have stripes but be careful, you might imagine blocks laid out like a grid and take you directly to your destination, but owned acreage/property didn’t work that way out here so neither do the roads. Also be careful of the “roads” that have signs on either end saying “Seasonal, limited use”. In the winter you may not get onto that road and if you do you might not get to the other end, or be able to get out on the other end (i.e. if the snowfall is heavy, snow banks could be plowed high across the end of that road). Some of these roads in spring might be losing their edges as rain and snow-melt and pushes mud & gravel to cover the uphill side and washes the downhill side off into the gully thirty feet below.  School buses drive on some of these roads. Many of our kids, families, and teachers live and drive on these roads. But as

But as country as our school is, I have been feeling the impact of things once considered to be only city problems.  In my Part 1, I mentioned the increased prevalence of meth (methamphetamine) in our area, and while I know it’s everywhere, this rural area that I am in right now is especially vulnerable to its influences. No longer a problem that can be dismissed as attached only to cities, gangs, violence... it has broken out on the thruways and highways to more remote locations and into secluded neighborhoods and tiny villages. I read the newspapers and see names of parents, uncles, aunts of the kids I teach. I know when students have to move in with another family member, and maybe have to move to another.

I have seen the cartoon pictures drawn by a child to represent the thing that happened in her home the night before so disturbing she doesn’t want to share the details. I’ve heard a little sister say of an older brother, “Mommy and Daddy were mad because he stole their pipe.” I’ve made that “hotline” call. I have seen angry and volatile 1st-grade boys finally warm up and in 4th grade get excited about school only to be chased away by a rent bill to a whole new school maybe one of those schools that's just a country hill away.

And now I don’t have enough fingers to count the children I know personally who have been impacted by the issues I’ve described and even more. You end up knowing that you can’t save every one of them but you still try. In a rural school, though, the toughest thing is you end up knowing them all really well. In the same way, you take the successes and joys into your heart, you take the pain that can come. They’re all your kids, in a way, and as I type I have two daughters and two nephews from Virginia visiting way over the hill and dale that I will be leaving to fetch in about two hours (it’s 8PM now).

You see parents know these kids, teachers know these kids, we see them every day, we know the importance of belonging, we know how vital a connection to the world is. So this rural microcosm often centers on local institutions like church, school, and above all family or families. That community is where you get grounded and secure as you prepare to spread and strengthen your wings, it’s what is in your heart and in the back of your mind, even when you are in school trying to get the day’s work done. And in this day and age where our leaders seem more wed to their position, their political ideology, personal ideology, and the narrative fed to them by their sponsors that enable them to slowly chip away at our communities: that secure belonging matters even more. Sticking together to protect the foundation(s) is what will allow us to work together to make change happen. It’s what will empower us to make “education reform” actually mean something.

So if you count yourself among the ranks of reformers, but you sit safely on the carousel of political security where friends and money can slide you from one entrepreneurial opportunity to another, or

you may have to contend with more than just the parent-driven, community-based "opt-out" movement. When it comes to even tiny rural communities like mine, there’s more truth and power to be found there. I see it here every day. 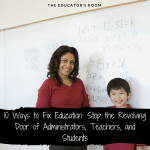 10 Ways to Fix Education: Stop the Revolving Door of Administrators, Teachers, and Students

The State of Education: Funding Control Changes in California 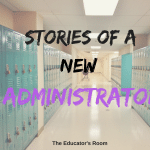 Stories of a New Administrator