”It Takes a Village.” It’s the title of a book written by a regrettably presumptive and chronically evasive presidential nominee, but also true. All people involved make some difference in the lives of my three daughters as they navigate towards adulthood. But not so long ago, public education became the sole focus of accountability for their outcomes. Our leaders ignored or entirely avoided the social, economic and moral decay facing communities, families, parents-to-be, and children. Instead, we are all served political theater with a side of demands that public schools be accountable.

This approach may be the result of their ignorance of issues confronted in schools never attended by them or their children. Or it might be intentional. After all, the kind of systemic reforms needed are ones that make even leaders and presidential front-runners afraid (and calling for them can get you labeled “liberal,” or worse yet:  a “Democratic Socialist”!). It could also be the result of arrogance. Growing up in assured economic security, attending elite schools and having well-connected friends in business and politics: these can partially blind a world-view. At best, it could be just a sense of entitlement resulting from any one of or a combination of those things. Regardless of the cause, the way non-educators speak with such presumption of expertise on how learning happens is demonstrated, and can be adequately evaluated is glaring. Take, for example, this quote from David Coleman as he addressed NYSED in 2011:

Coleman was talking about the need for the new standards and about how schools had gone so wrong with the type of writing school children had typically done. His statement is ironic because he clearly has grown-up in this world and believed we should give a [expletive] about what he feels and thinks about public education and how it’s done. So maybe in his case it is arrogance. Coleman was dubbed “the architect” of the new common core standards, but the last time I remember someone being called “the architect” it cost our nation over two trillion dollars (and growing) and a couple hundred thousand lives. So I watch politics and policy closely for such nonsense euphemisms and wait for more respect for all those previously mentioned folks who matter so much to my kids and me:-those “village people” (not the band).

The good news: N.Y. Assemblyman Anthony Brindisi and Senator Joe Griffo have announced sponsorship of three bills: 1) for more fairness and local input in teacher evaluations, 2) repealing the school receivership system, and 3) for more open and transparent state testing.  These bills can be searched by their number on nyassembly.gov  (A10056; A10057; A10058, respectively). They appear to be the type of legislation that is more respectful, inclusive and understanding, and I urge readers to consider supporting them. 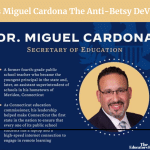 Is Miguel Cardona The Anti-Betsy DeVos?
« What I Have Learned: Farewell Letter to My Students
The Bathroom Issue-- Me, Oh, My, What Shall We Do? »