How the Parkland students became those activists

Will it be student activists who force political action regarding gun violence in America? Maybe that's exactly what this country needs. Mere days after the February 14th shooting at Marjory Stoneman Douglas School in Parkland Florida, Emma Gonzales, one of the student-survivors, was calling out politicians at a rally.  In a widely viewed video  she shouts "B.S.!" (and inspires the crowd to join) in response to leaders who feign powerlessness but receive large campaign donations from the NRA.

Appearing on "Meet the Press", Emma said, "Now is the time to get on the right side of this, because this is not something that we are going to let sweep under the carpet". Four of her peers ( Cameron Kasky, David Hogg, Alex Wind, and Jaclyn Corin) joined her there and have been utilizing both traditional and social media to deliver their message to a nation-wide audience. As Chuck Todd wrapped up the interview, he said to these young folks "You guys are something else when it comes to showing us what citizenship means."

Seventeen-year-old Cameron even stood face to face with Senator Marco Rubio, in front of a huge town hall crowd. At this event, televised on CNN, Cameron demonstrated the poise of a seasoned debater, challenging Rubio to stop taking NRA money. Rubio's smarmy response was "People buy into my agenda"-apparently rejecting the notion that he caters to NRA money. To see this teenager confidently press a senator for a response, then assertively quiet the crowd to allow Rubio to respond, is impressive.

These students have earned and learned the stage

"Jaded political and media types have been especially impressed. Every time you check the news, some elected official or journalist or pundit or reform advocate is publicly marveling at how these teens are a force, unlike anything the gun debate has ever before witnessed." (Michelle Cottle, How Parkland Students Changed the Gun Debate)

I, like many who see these teens speak, am awed. But consider the price they've paid to become activists and gain admission to the gun control debate. Seventeen of their classmates were killed, and at least 14 injured. When these young, surviving victims step up to show us all how it's done, they are right to point out that adults have failed them and that: politicians get big donations from the NRA in return for that failure. Beyond being right about those things, though, these teens are just plain savvy. A February 28th article in The Atlantic takes a closer look at them, saying "The students of Marjory Stoneman Douglas High School are precisely the type of self-confident, socially aware teens poised to change the gun-control debates across the nation" (The Atlantic, 2/28/2018). The Miami Herald wrote, "They have been praised for their composure and well-articulated arguments, which often appear so polished they have fueled conspiracy theories that the students are 'crisis actors'” (Miami Herald, 2/23/2018).

How did this group of students become so capable? It turns out that at their school, speaking skills and debate skills are explicitly taught.

We shouldn't wait for a tragedy to equip young activists

"But what really explains the students’ poise, said Broward Schools Superintendent Robert Runcie, is the school district’s system-wide debate program that teaches extemporaneous speaking from an early age. Every public high school and middle school in the county has a debate program, along with more than two dozen elementary schools" (Kyra Gurney, Last fall, they debated gun control in class. Now, they debate lawmakers on TV).

I was a little choked up when I saw Emma at that rally. She wipes tears away and says "We are going to be the last mass shooting". Her outrage, sadness, and determination made me wonder if my own girls (19, 16, 12) would be so brave. And it made me hope to God they would never have to be. No child should ever have to be, and that is the point of the "Never Again" movement the students started. Now, students across the nation are gathering, sharing ideas and either has participated in or are planning to take part in demonstrations of their activism in the debate over gun control.

These conversations, debates, and protests all matters. It is also deplorable that the most relentless activists have had to be the children; children who were lucky enough to have survived. But that only begins to describe why these kids from Parkland, named the safest city in Florida in 2017, have captured the attention and admiration. It was also one more shooting involving a gun that doesn't need to be available to the public. It doesn't just deliver a gunshot wound, and it doesn't just kill. The AR is a gun that turns flesh into ground meat.

So most gun control activists aren't hell-bent on taking away people's guns, they just want reasonable limitations on the second amendment-and they just want to save lives. The resistance of establishment politicians and the gun lobby backing them is being challenged by humanity, reason, and kids engaged with their world and the country in a way young people rarely are. They are super smart, the internet age has made them hyper-aware and their schooling has made them capable of not only getting information but communicating and spreading their message. We would do a great service to the next generation and the world if education reform looked more like what these are already getting.

“...all these people should be home grieving. But instead we are up here standing together because if all our government and president can do is send thoughts and prayers, then it’s time for victims to be the change that we need to see." (Emma Gonzalez) 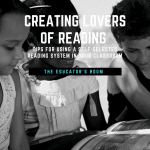 Creating Lovers of Reading: Tips for Using a Self-Selected Reading System in Your Classroom
« The Death of Reflection in English/Language Arts Classrooms
Using Current Events in Teaching the Executive Branch »