Lori Rice is a fourth-grade teacher at West Elementary in Wamego, Kansas, who has taught K-2 reading as well as kindergarten, first grade and fourth grade since 1996. She has a passion for creativity, learning, questioning and the whole child. Her classroom is a place of acceptance and celebrating differences.

There is always a point in the year when the students have become comfortable with each other and I know.  Patience runs out, words develop edges and group work becomes unbearable.  I have an activity I pull out each year to help students build each other up and look at each other with grace and respect.  This year, however, I am not in charge.  I am an observer and guide in my classroom.  There is always a point though.

Student Intern: Lauren Laudan--We are two weeks away from Spring Break, a much-needed week of renewal, rest, and possibly vacationing. With the bitter cold temperatures and wind chill Kansas is currently receiving, students are not going out to recess and thus stuck in the classroom or lunchroom playing board games. This missed exercise is now getting bottled up inside.

Where does that extra energy go? Brain breaks have never been more needed and students need learning opportunities in which they can move and learn hands-on. Students also need mini pep talks to help them (and you) get through the next two weeks (especially since we have parent-teacher conferences next week). Lori and I have made the decision to spend a few weeks focusing on helping build up our students’ self-esteem by showing them how to look for strengths they admire in one another. Teaching about self-esteem is something that is very relevant and necessary to elementary students as I often overhear my fourth graders saying, "I can't do it" or "I'm not smart enough". In particular, one of my girls has even said to me, "I'm stupid."

Mentor Teacher: Lori Rice--For a university assignment Lauren is to do an action research project.  Teachers do this daily in their classrooms.  The idea is to observe student behavior and collect data.  Then, a process is introduced to change the behavior.  After 10 days data is collected again through observation to see them impact of the project.  We do this with sticker carts and incentives for individual students.  With the barometer of the classroom, however, I suggested Lauren look at my usual activity with new eyes and develop a process to build students up.

Teacher Intern: Lauren Laudan-- To begin this project, I asked students to think about their strengths and gave them one minute to make a list. They were given a post-it note and could list as many traits as they wanted with no specific guidelines given. Many students wrote that they excelled at specific sports such as volleyball, football, or basketball while others wrote subjects such as math, science, and art. Very few students wrote values they feel they possess such as respect, patience, compassion or kindness.  These were collected and the results tallied.

Day 1: Lori and I decided on a character trait to write on each students’ desk while they were at lunch. When they came back into the classroom they were very curious as to why a word such as “listener” or “helpful” was written on their desk in a dry erase marker. After a few minutes I explained that the word on their desk was a word that described them and something both of their teachers admire. I also told them their word was for their eyes only and they were not to look at any other desks. After they read the word they were to erase it.

During language arts we did activity on character traits.  Each table group was handed a list of character traits, both positive and negative, and as a team they had to work together to highlight the traits they strive to be. Examples  included kind, determined, responsible, considerate, and persistent. Words that were not worthy of highlighting included hateful and conceited. This   for students to develop a higher vocabulary as we discussed those unknown or new words. After sharing some of the positive values, I asked students if words such as "pretty” or “good looking” taught us about someone's inner character. The students all agreed that these comments didn't truly build us up on the inside, although they were nice to receive.

As I continued explaining the project, I wish I would've taken a picture of the students’ faces when I told them they were going to get to write on their classmates’ desks with dry erase marker when they witnessed a student demonstrating positive character traits those words that “build us up”. I gave an example, “If I see H loaning a pencil to J who doesn’t have one, later that day I can go write on her desk ‘giving’.” You don’t want the person to see who wrote it though as this is an anonymous activity, which is part of the fun! Students were told they could not sign their name or ask who wrote the words on their desk. The point was to know that someone was watching them not give up, share, or help care for another person. As soon as the word is read on their desk, they erased it and kept it in their hearts.

By the end of the day, each student had at least five to ten words written on their desks and other classrooms of fourth graders and teachers had even picked up on it. It was amazing to hear from a student who later in the day share with me, “I love this project because I have been writing on my classmates’ desks that I don’t normally talk to.You usually don’t just go up to a person and tell them they are considerate, but now I can.”

We did lessons over the two-week period that brought attention to character.  Students wrote a poem about themselves and where they are from.  They focused on one body part that helps them and wrote a poem modeled after "The Best Part of Me".  They wrote a users manual about themselves focusing on habits of mine.  We discussed how they learn best, what helps their learning, how they show persistence and how they like to receive feedback.  At the end of the two weeks the students created collages of themselves.  They used pictures from the beginning of the year, their poem "Where I'm From" and cut words from magazines.  These were a wonderful talking point for parent teacher conferences.

Throughout this two weeks the students wrote on each other's desks.  As expected, the amount of writing decreased after a few days.  When a student was absent, however, their desk would slowly be filled that day so they came back to a "sheet" of compliments.  With teach modeling and prompting the writing continued.  We did monitor and erase if words were surface words or descriptive words that were not positive character traits.  Those, however, were few and far between.

On the day before spring break we read "If I Only Had a Green Nose".  After the book students were given a sticky noted and again asked think about their strengths and were given one minute to make a list.  One student commented, "Oh good!  I have more strengths to add!"  This time their words included strong, friendly, caring, helpful.  We will continue to encourage students to focus on positive character traits and look forward the continuing our community this last nine-weeks of school.

Student Teaching Diaries: Is This For a Grade? 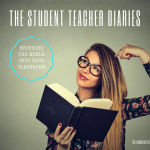 Student Teaching Diaries: Bringing the World Into Your Classroom 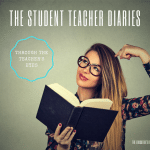 Student Teaching Diaries: Through the Teacher's Eyes
« Flipped Learning: What My Students Have Taught Me
#SATCHAT’s Coalition of the Willing Should Be in Teacher Ed Programs »