Based on the definition of the word, one would probably say I am a liberal. Needless to say, I think I’m actually a bit of a centrist, agreeing with stances and policies on both ends of the political spectrum. On Election Night, much of our country was sitting on pins and needles; waiting to see who would win and what direction our country would go. I would venture to say that much of our country was shocked on different ends: incredibly upset and couldn’t believe he won, didn’t think he had any chance of winning, or beyond ecstatic that he did. The next day, our large campus was pretty tense. Teachers were visibility upset, verbalizing their feelings with others. Some were visibility gloating, proud that their candidate won. Students wore shorts displaying their candidates, while others who disagreed made their feelings known in inappropriate ways. Communication easily became toxic.

Three of my students have verbally supported our president-elect, knowing that I disagreed. In separate conversations, we have sat at my desk during down times of the yearbook’s production and discussed the current state of politics and why we believe in the stances we do.

One said that this is the way she grew up. It’s what she knows. It’s what she believed she ought to believe, based on the voting history of her family. Another went through many topics (eg. gun control, abortion, foreign policy), and he validated why he felt the way that he did based on his faith and his previous experiences. And one student has been a consistent conservative (actually rooting for Marco Rubio), and explained his political reasoning with evidence.

All three are returning students in the journalism program.

They say we can always learn something from kids. One thing, of many, that students have taught me about politics is that conversation is vital. In the classroom, these students feel safe talking about politics with a teacher they know disagrees with them because there is a shared level of respect, even though we disagree, along with a shared goal in the production of the yearbook.

If students know you respect them, the topics of conversation are endless and the effort of their work is immeasurable. Yet, that raises the question: if kids can do it, in a small microcosm of America, why can’t educated, professional adults, whose job is to converse and compromise? 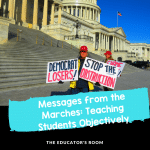 Affirmative Action at the Crossroads: Which Direction will the Supreme Court Go?
« 10 Years Later: 10 Takeaways on the iPhone and Education
Tracking is a Dirty Word »