Recent actions by the Trump Administration and the pending resignation of Anthony Kennedy from the Supreme Court have brought into question the status of affirmative action, the set of federal policies instituted by John F. Kennedy to counteract centuries of discrimination against specific minorities in American society. Affirmative action was developed and has evolved in academia and in business as a way of promoting African-American, female, and other members of minority groups in order to compensate for discriminatory practices, especially in the segregated South. The Trump Administration’s Justice Department has reversed Obama-era guidelines in terms of college placement for minorities. Moreover, the Supreme Court has slowly chipped away at protections for minority groups that were enshrined in the landmark 1978 Regents of the University of California v. Bakke.

With the chances of a conservative nominee replacing Justice Kennedy, who was often seen as a swing vote on the Supreme Court, appearing to be very high, the protections offered by affirmative action in the United States appear to be very much in doubt. For those who have opposed affirmative action as a form of reverse discrimination stemming from a race-based quota system, the appointment of a justice who will end the practice will restore a sense of balance for those who might suffer as a result of the policy’s potential for reverse racism.

A History of Racism

Race-based discrimination in the United States has its roots in the system of slavery that was established in the antebellum South. Blacks in northern cities fared little better as they were forced to tolerate de facto segregation in education rather than the de jure (by law) segregation that governed the former Confederate territories. Pre-war “black codes” were codified into “Jim Crow" segregation that was upheld by the Supreme Court’s 1896 Plessy vs. Ferguson decision, affirming the standard of "separate but equal." Not until 1954 was segregation in America’s school ruled unconstitutional in the landmark 9-0 Brown vs. Board of Education of Topeka decision, but overcoming the legacy of racial prejudice, segregation, and discrimination would prove a much bigger challenge.

Enter the Bakke case. In it, the Supreme Court ruled that a school could use affirmative action to provide placement for members of minorities provided they were not implementing a “quota system.” The conditions under which race could be considered had to be “narrowly defined.” Under the Equal Protection Clause of the 14th Amendment, schools and employers could use race as a mitigating factor only if other considerations also figured into the decision to provide placement or in hiring. The Court also ruled that the state "has a legitimate and substantial interest in ... eliminating ... the disabling effects of identified discrimination." ("Regents of the University of California v. Bakke." Oyez, 6 July 2018,www.oyez.org/cases/1979/76-811.)

Chipping Away at Affirmative Action

The Supreme Court would uphold its decisions in Bakke in two companion cases on affirmative action in 2003. The cases of Grutter v. Bollinger and Gratz v. Bollinger decided that the University of Michigan had a compelling interest in using race as one factor in admissions, but that a point-based assessment system that quantified where race stood in the admissions process made race “too prominent” to be considered “narrowly tailored.” More recently, the Supreme Court further defined its stance on affirmative action in Fisher v. The University of Texas at Austin (2013). In this case, the Court stipulated that educational institutions must clearly state the necessity of race-based placement policies, and alternative methods of determining placement must be attempted before resorting to a race-based element in the constellation of factors when considering placement of students. The Court was, in effect, reducing the burden of proof on the educational institution that a minority student deserved placement above students from the majority white population. (The University of Alabama at Huntsville, https://www.uah.edu/images/administrative/legal/pdf_files/The_Current_Status_of_Affirmative_Action_in_Admissions.pdf, available as PDF, 2018)

The Future of Affirmative Action

The challenge for college administrators who are aware of white privilege and who want to be fair in college placements is that the Trump Administration has removed all Obama era guidance in making decisions on minority placement. The Supreme Court tends to stay with the decisions that have laid the groundwork in jurisprudence, a concept known as stare decisis. It holds that precedent should be used as a guide for later decisions to ensure consistency and fairness.

But the Supreme Court has overturned precedence before, as the Brown vs. Board of Education decision demonstrated. Therefore, a Trump Supreme Court nominee may be willing to join the conservative majority in completely abandoning any race-based considerations when dealing with college placement and employment. Just as it did with the Voting Rights Act, the Supreme Court may see the time period of racial prejudice as having passed, and future minority applicants will have to be placed solely on merit with no attempt to make up for centuries of past discrimination. 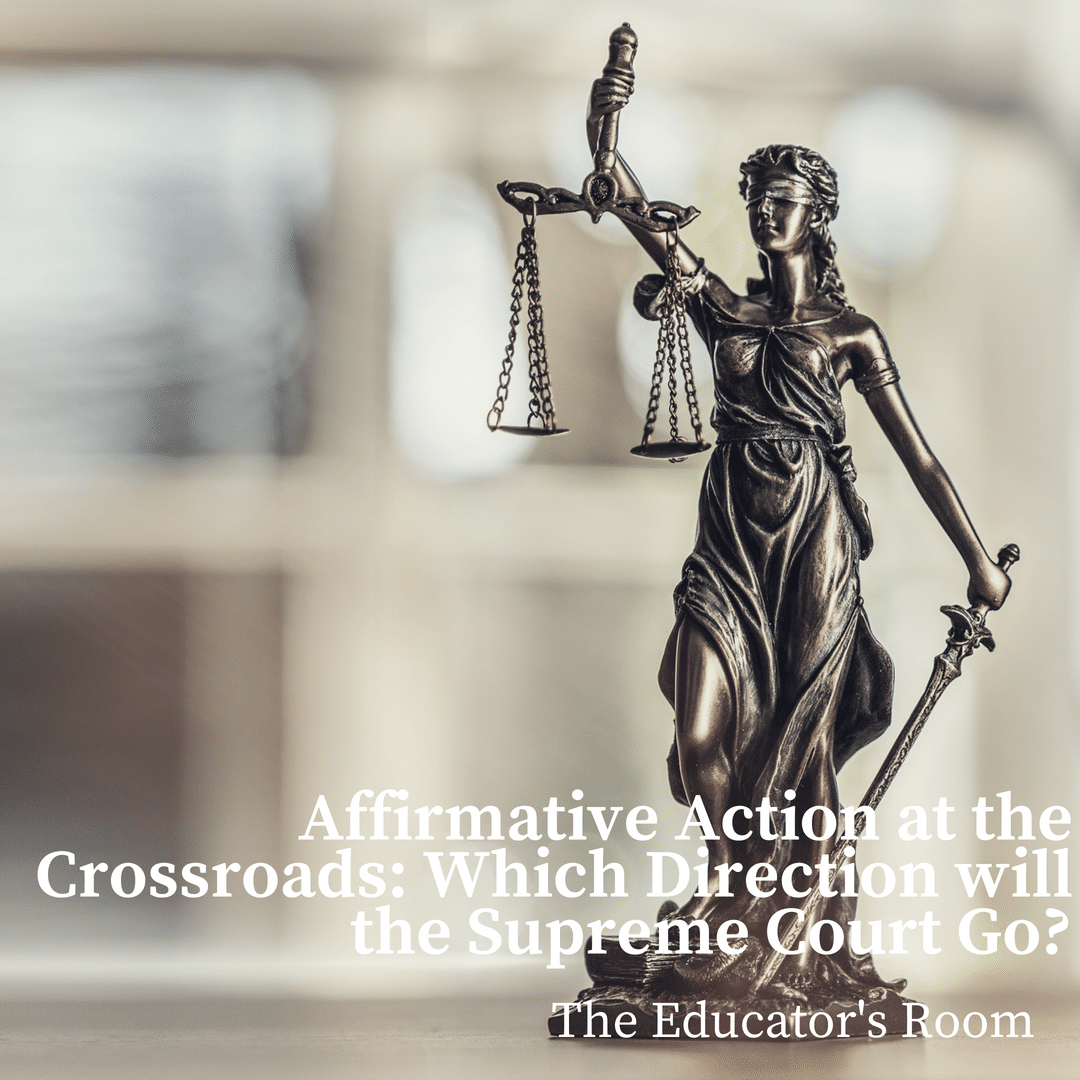 Teaching in a Polarized Society: Reaching Across the Political Divide
« I Love Teaching Summer School or Am I a Glutton for Punishment?
Fighting for Parental Leave as a Teacher »