In the Bible, Jesus is referred to by the term "rabbi" at least 15 times, mostly by his disciples. The amount of times that He "taught" or "teaches" people is debatable, but one can argue that each time Jesus talked, there was a lesson that was to be involved. No, Jesus didn't differentiate or call home to mom if the lessons weren't applied properly, but he was, at his core, an educator.

So too has the church been involved in education. As previously mentioned, the Hebrew "rabbi" is translated to mean "teacher" (or the term daskalos in Greek) as well as "preacher" (ierokirykas in Greek). The early church was reflective of this, as the study of Latin was coupled with the understanding of the Bible, and the launching of the romantic languages can be attributed - at least in part - to the construction of religion and its understanding. Conversely, the Reformation (and the launch out of the Middle Ages) can be largely centered on the religious desires to place a Bible in the hands of parishioners in the language they spoke (like Martin Luther in greater Germany, or Huldrych Zwingli and John Calvin in Switzerland). Education and religion, for much of the last two millennia, have gone hand-in-hand.

So what is this teacher saying here on The Educator's Room? Does he proselytize to his students? Demand their conversion? Damn the others?

Far from it. I simply had a moment of reflection today as I said goodbye to my pastor this week.

You see, when I first took my current job in my current district, I was in need of something a bit more than what I was getting. And that's where she, my pastor - and my church - entered my life. That hole I was missing was filled. My compass, re-purposed. My vision realigned.

No, I wasn't brainwashed. I wasn't exorcised. I wasn't forced or flummoxed into my faith. I merely had my mind - and my heart - opened.

And I realized that's what we as teachers do.

So while I, as a social studies teacher and Christian, will gladly open the Torah, the Koran, or the Book of Mormon to teach and learn about the religions of the world, I do so knowing that my own faith will be strengthened by it. When students who are Hindu, Buddhist, or any other religion invite me to their place of worship, I go. I support. I strengthen their own faith. It's because I'm unafraid, and I want to build them as the people whom they are.

I've learned plenty from my pastor since joining my church. I've learned what it means to provide grace. To exuded selflessness from every pore. To be humble. To rebound from being broken - yes, this tough guy of a 6 foot, 200 lbs frame has broken down a few times in her office, as she, all 5 foot and 100 lbs of her, consoled me. To strengthen a community. To show leadership in times of trial. To understand. To bridge gaps. To listen. To share. To empower. To embolden. To inspire. To love.

It goes without saying that I think our emergency responders (police, firefighters, EMT's) and soldiers are our heroes. They rush into the most difficult, complex, surprising situations to save complete strangers or fight for their rights.

But preachers, teachers, and others who work in human services - they are champions of people. And being a champion of people who stumble, fall, and let us down can be exhausting. And as "wells" of society, it can get exhausting when we're drained empty. (If you like that analogy, my pastor taught me that a while ago)

So while I say goodbye to my preacher, I know that the lessons I've learned will live on in me and many others. And may we, as teachers, accept and acknowledge that influence.

Similarly, when it's time for us to step aside - whether it's from the center of a pulpit or a podium - may we all have the strength to do so. But may we also have those who follow us to carry on our mission. 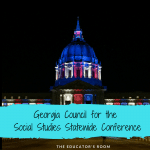 First, We Must Educate The Heart 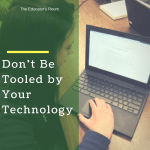 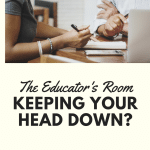 Keeping Your Head Down?
« Trump’s First 100 Days in My Classroom
Six Books for Secondary Teachers on Teaching Students to Write »