I’m a proud graduate of Panther Valley High School, which a website labeled the “6th worst district in the Commonwealth of Pennsylvania.” Nestled in the brown belt, coal region of our state, it has suffered economic and social turmoil for decades now. That said, I don’t care one bit about what that website says, the teachers there saved my life. My friends who still teach there are continuing to save lives, day after day. To you, these teachers are just names in a blog post -- to me, they are individuals whose actions have tattooed themselves to the way I work, think, and care about others.

Beginning in elementary school, my 2nd-grade teacher started the process of saving me. This is the year my parents divorced, and one of my earliest memories is them walking into my room to deliver the news. I remember sobbing so much that it hurt and I couldn’t cry anymore – but that’s an anomaly for that year, as the rest of the time I recall only positive feelings in that classroom: playing Heads-Up, 7-Up, loving advanced math problems, acting out skits, and figuring out that I one day wanted to be a teacher. Mr. Rossino and I are still friends 28 years later, as he influenced me to become a sports official.

When I moved districts the following year, I faced a hell that knew no limits. Transitioning to the new school was problematic at best, and a group of students colluded to ensure that I didn’t have any friends the first year. That third-grade teacher did little to help, and when I placed glasses on my face, I became the target for most of my peers’ disdain. I was enveloped in a circle of sadness until that teacher faced health problems and we welcomed Ms. Lapos, our substitute for the remainder of the school year. She turned the culture of the class around and helped pair me up with a few friends who I still have to this day.

She turned the culture of the class around and helped pair me up with a few friends who I still have to this day. Click To Tweet

As my time at elementary school came to an end, I was tested for both gifted and reading support. Mrs. Kennedy, the reading specialist at the time, learned both of those areas were connected, and I suffered from dyslexia. I couldn’t read because I couldn’t differentiate the letters from one another. She taught me how to speed read, and she turned a handicap of mine into an asset.

I took this new skill to middle school, where I met probably the best-connected team of teachers one could ever meet. My math teacher, Mrs. McKee, happened to be my step-aunt, and she fostered a love of the subject that still persists to this day. My science (Mrs. Zubek) and geography teachers (Mrs. Balliet) had this shared bond between them that was so determinant on proficiency before it was used as a commonplace word, that they pulled students at any and all times to ensure that they knew their periodic tables, maps of Central America, and more. They helped all my peers and me succeed in our new setting, and that established success throughout middle school.

Moving to the high school, the influence of my teachers became all that more important. As I began to change my friends, my decisions started to go downhill really quickly. I quit all the sports I belonged to and started using drugs and drinking. We would spend the evenings doing things we thought were funny, but, now hindsight highlights how we were merely knuckleheads and delinquents. It was my teachers in 10th grade and later that turned me around. I still remember the conversation Mr. Morgans and I shared; he told me that I was intelligent in his class without even trying and that my life might mean something if I took it more seriously. I took his elective classes the following year, and I can still remember the feelings I had as he praised me for being both the finest public speaker he’s ever had and how he entered my creative writing and poetry into the Scholastic Writing Awards, which I won. He built up this broken young man enough to think that he could go to college, and he took me on college visits with him and his son.

He built up this broken young man enough to think that he could go to college, and he took me on college visits with him and his son. Click To Tweet

Mr. Hoffman, my math teacher in 10th grade instituted much of the same success in me. After passing 9th-grade math by mere tenths of a point, he upended my bad-boy image and made me feel like a math savant. After earning 100s in all the marking periods, he took it upon himself to teach me how to ace the math component of the SAT, which I did. He also pushed to have our very first AP calculus class, which he taught and I gladly enrolled in, earning my first college credit in my senior year. When I nominated him for Pennsylvania Teacher of the Year, this tough guy pulled me into his class to ask, "what in God’s name are you doing?”

I told him that he needed props where props were due.

My senior year English teacher was the most recent Panther Valley teacher who influenced me a great deal. As we read texts, I began to see myself in them, and the characters’ struggles became my own. I can’t tell you how many minutes we spent outside of class talking about the texts, and her positive support pulled me away from my friends and full bore into being an academic and life-long reader. When I told her she influenced me to be an English teacher, but how I was worried there wouldn’t be jobs in the depressed market, I’ll never forget how easily Mrs. Turrano told me “there will always be a market for great teachers – and you’ll be a great teacher someday.”

Most of my friends from high school didn’t turn out as well as I did. Some became teenage fathers. Some ended up in jail. Some dropped out. Some felt trapped in their lives. Most did drugs and continued to get in trouble. But I made it. And that’s because of my teachers saved my life, something they’re still doing to this day. 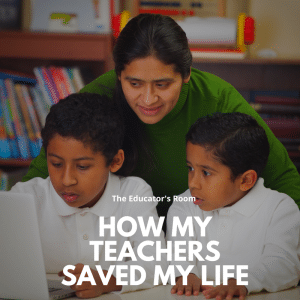 Dissing the Family Crazies: A Christmas Story
« [OPINION] All "Armed" for Our Students
If That's What it Takes, Students Should Be Outspoken, Feisty, and Rebellious »