This is Part 2 of an interview with Lauren Hopson, known around the Internet as the “Tired Teacher."  Hopson’s five-plus minute speech to the Knox County, Tennessee Board of Education has been shared all around social media among teachers and their supporters, and at last check had over 80,000 YouTube views.  See Part 1 of this Interview Here. On October 2, Hopson made her now famous address to the Knox County Board, detailing what has not changed in almost two years of "reform," and how teachers were tired of the endless requirements and not being able to do their jobs. The response from some board members has been to provide a list of changes. Teachers want change, but there is almost no way for them to affect the change. The overall response is that most of the requirements are coming from the state or coming from the federal government. Hopson’s response to this shifting of responsibility is that Superintendent McIntyre has spoken on Capitol Hill in Washington about these evaluations and has the “ear of the Governor,” so there is still responsibility at the county level. There have been school boards from around Tennessee that have drafted letters of concern about Common Core or the evaluation system. Knox County has not.

Since her October address, several board members have come down to speak with Hopson.  They were very apologetic about board members not visiting schools, which she had addressed. As to the YouTube video, she doesn’t know who posted it. Hopson did not, and this is not about her. It is about teachers.

Pre-scheduled meetings with teachers for their five-year strategic plan were occurring in October, but there is still a general feeling that teachers won’t be listened to. McIntyre did send out a video message expressing that he would like to sit down and talk with teachers, but there is some skepticism based on past events. There is hope that all the response from the video may help. She has emailed McIntyre and expressed that all the media attention has not been sought by her. She wants to work within the system to help the schools. When we spoke, Hopson, McIntyre, and the district’s Chief Accountability Officer were working on setting up a meeting when time allows. She is not sure what the meetings are to accomplish, but she hopes that he and the board have “seen the light.”

Hopson has gotten at least sixty emails from teachers in her district thanking her for speaking up and agreeing with her (though the district has said most teachers agree with them.)  She is waiting to receive any emails that argue with her.  Hopson has responded to the emails that she has gotten, suggesting that the teachers email the board and the superintendent to make their concerns heard as well. She has hopes, but in our phone call, I could hear the worry.

“I would like to believe that maybe some positive changes might come about. I try to believe the best in people, but it also could end up that I could lose my job. That could be the other end of it.”

As we continued to chat, we spoke about fears teachers have of speaking up. She knows that there is a real fear in Knox County and sometimes it is used as an excuse.  She has spoken to McIntyre several times over his five-year tenure and has not felt repercussions. “Now I could be completely naïve and not have [/fusion_builder_column][fusion_builder_column type="1_1" background_position="left top" background_color="" border_size="" border_color="" border_style="solid" spacing="yes" background_image="" background_repeat="no-repeat" padding="" margin_top="0px" margin_bottom="0px" class="" id="" animation_type="" animation_speed="0.3" animation_direction="left" hide_on_mobile="no" center_content="no" min_height="none"][a job] tomorrow.” She laughs as she tells me she did get McIntyre to say on camera at the board meeting that she did still have a job.

She does sometimes get concerned that some people just tell her to keep speaking for them.

“If they just keep hearing from me, then they think it’s just me. I want everybody else to realize that if everybody does it then we have [power]. If it’s just one or two people, then we don’t have any power.”

I asked what made her want to be the teacher that spoke up. She said she had always been outspoken, well at least since college. That and Oprah Winfrey’s message of you teach others how to treat you. Sometimes she may be scared, but if she gets mad enough then she feels the need to speak. The day she decided she would speak with the board, two of her co-workers had received “conference of concern” letters and warned that if test scores in their classes did not get raised, the system would have grounds for termination. That made her angry.

“If I had talked the board that night, it would not have been pretty.”

We both laughed at that.  She wasn’t scared anymore.

Hopson’s principal has spoken with her to make sure that there is nothing on his end that has made her upset.

“And honestly, the administrators in my building have been as supportive as they can be. They have tried their best to soften the blows as they can. If I were at another school, it may not be that way.”

Everything has been publicly cordial between she and McIntyre. The only negative is a response in a community paper from a board member, arguing against the concerns, and complaining that the paper’s series on school issues were allowing teachers to make anonymous comments. In a newspaper article, teachers who made the complaints were dismissed by the board member as complacent and for not wanting to make progress.

As we wrapped up our conversation, I asked how the concerns of teachers in Knox County related to those of teachers around the country. Hopson has seen these concerns on different forums and Facebook pages, and it shows this is not just a local issue. What does she hope teachers take away from her address?  She was very clear:

“To speak out. To not be afraid to speak out. I would rather lose my job and go down fighting then lose it any way because I said nothing.  I am not a hero. I am a teacher who got angry and quit being scared.”

Others have said that she is their voice and to keep speaking up for them. 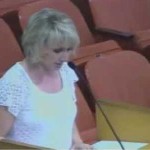 Teachers Who Will Be Silent No Longer: Melissa Tomlinson Confronts Chris Christie