Welcome to 2018, where schools are permitted to hold pep rallies for students to "get them excited" about standardized tests (like that ever worked!?), but if a teacher makes his students - 95% of whom are free and reduced lunch - pancakes during the tests, that leads to him being fired.

This isn't an article from satirical The Onion, but the rationality - or lack thereof - reads that way.

What happened was Assistant Principal Marian Grill of Lancaster, Pennsylvania walked into a classroom and wondered why Kyle Byler, an 8th-grade social studies teacher at Hand Middle School, was doing for his students before the Pennsylvania System of School Assessment (PSSAs).

This story, as reported by LancasterOnline, claimed that "Byler brought an electric griddle and made a whole-grain pancake for each of test-taker to eat during the test." That same article said his students labeled him as "an awesome teacher" and parents claimed he acts a "school dad."

What does the price of being "an awesome teacher" acting like a "school dad" earn a teacher in this circumstance? A spot in the unemployment line, apparently.

In a phone interview with LancasterOnline, Mr. Byler said, "I don't understand what I did wrong, to be honest with you. There was no infraction whatsoever. At no point was it any distraction for any of the students. They worked their butts off."

PA Dept. of Education Spokeswoman Nicole Reigelman reported to the periodical that "there is no rule against serving or preparing food during the PSSAs, however, 'those activities would interfere with actively monitoring the assessment.'"

In what is probably the best quote ever from an 8th-grade student, Alizea Rodriguez said "[Assistant Principal Grill] was the distraction [when she entered the room]. Not the pancakes. Not Byler."

Jason Molloy, president of the Lancaster Education Association, said: "If the administration is concerned about a hot-cooked whole-grain breakfast could be a distraction during testing, this could be resolved in other ways, not by firing a dedicated and excellent teacher."

What point have we reached in our collective addiction to toxic testing that making food for kids before they take the PSSAs is a fireable offense for a teacher? Click To Tweet

Let's unpack that a bit.

First, it's amazing to note that Byler cares enough for his students that he'd take the time to make the students breakfast before they take the test. I've made breakfast for students before. It takes hours. And it's hours I often don't have to dedicate early in the morning, especially when I'm trying to ready my family to get out the door on time.

In Byler's case, it was just another example of him being "school dad."

Second, if this occurred during any other day in the school year, would he have been fired? It's hard for me to justify to any school board member on any day that this veteran educator made kids breakfast and that's why he's being terminated - let alone a day where every teacher in the Commonwealth of Pennsylvania hearkens the importance of a full night of sleep and a healthy breakfast in the morning.

In Byler's case, he couldn't provide his students 8 hours of sleep. But he could give them - who, again, are nearly all on free and reduced lunch - a hot breakfast. On his own dime.

Third, what is this obsession with active monitoring tests? One of my favorites is from online blogger LoveTeach, who shared their 2014 article titled, “16 Things You Can Do While Actively Monitoring during Standardized Testing (or the next time you’re crazy bored).” My favorites are imagining which animals each student would be if they were members of the animal kingdom and “using Crest Whitening Strips.” The blogger followed up this entry on WeAreTeachers a year later with “17 More Things You Can Do While Actively Monitoring a Standardized Test.” Again, some of my favorites are “imagine what you’d want your last words to be” and “imagine sending each student positive vibes, one at a time.” I responded to these silly posts with a serious reflection of my own: "'Active Monitoring Standardized Tests' is a Joke."

In any teacher's case (not just Byler), couldn't we use our time more wisely? More productively? More about putting our students first? Like Byler?

Fourth, whatever happened to let the punishment fit the crime? In what other professions would making breakfast lead to an immediate termination? Do we wonder why there's a shortage of teachers? Why do teachers fear the repercussions of losing their union? Their say? Their advocacy? Their jobs?

The Lancaster School District School Board will meet Tuesday evening to decide Byler's fate. While I don't know what to expect, I do hope (and imagine) that PA Secretary of Education Pedro Rivera, the former superintendent of Lancaster Schools, will get involved. Additionally, I imagine that the Pennsylvania State Education Association, an affiliate of NEA, will be suing the district for such heavy-handedness and to earn Byler's job back.

"I also think it would be justice to, rather than call for the firing of the oppressiveness administrators behind this egregious move, that they be punished. How? By making the students breakfast.

I also think it would be justice to, rather than call for the firing of the oppressiveness administrators behind this egregious move, that they be punished. How? By making the students breakfast. Click To Tweet

That is - unless there's more to this story... 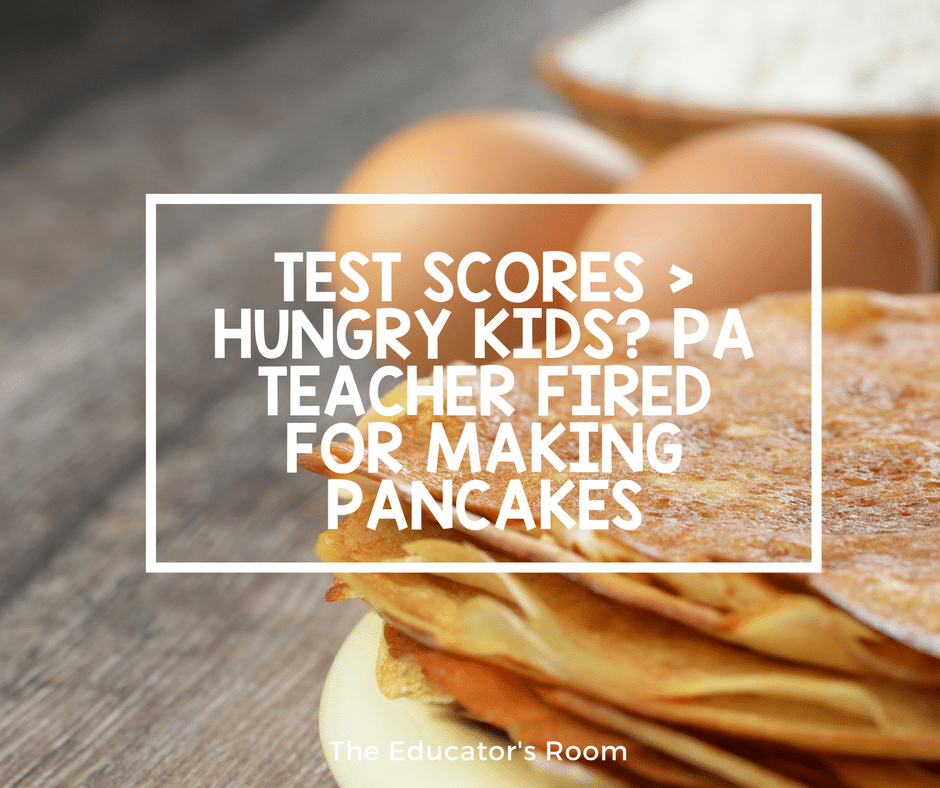 Dissing the Family Crazies: A Christmas Story
« 10 Things Teachers DID NOT Have to Deal With 10 Years Ago
Are Elementary Teachers Jacks of All Trades or Masters of None? »