I don't think anyone, including myself, believed I would go through with it. I finally took a two (2) week medical stress leave as a high school teacher.

The guilt. I couldn't shake the guilt. I felt like I was giving up, letting so many people down, letting myself down. Transparently and honestly, I felt like a failure. I was supposed to be the pillar of strength. I was supposed to be the one that encouraged others to press on, persevere, and walk out the faith I claimed to so fervently believe in. I was the one others came to when they wanted to give up. I was so worried about what others would think. How would they now view me? Like the emperor with no clothes, I had been exposed. How could this be happening? I was the veteran. I was the mentor. I was the go-to. After all of this self-doubt, I realized the simple fact I had been ignoring all along: I was human.

I had been battling headaches, sinus issues, lack of sleep, trying to maintain my job and personal life, navigating the stress and fears of this pandemic, as well as a continual fight with my district over the services in my son's Individual Education Program (IEP).

It took physical illness, mental anguish, and spiritual depletion for me to finally say "Uncle" and give my body, mind, and soul a rest. I could no longer justify dragging a broken shell of my former self into work. My kids did not deserve to have a teacher who was not "present" in every sense of the word. Worry, stress, and anxiety replaced my typical happiness, humor, and hopeful approach to my daily life, in and out of the classroom. I was too focused on the external and internal factors that made it impossible for me to get back my sense of "normal," and it became no longer fair to my students.

There were many factors I could not control that drove me to this stress leave. As an educator and a mother of a child with special needs, one is often torn between one's duties to family and one's job. My situation was exacerbated by the need to continually fight for my son's educational needs and safety during his first year of in-person learning, his first year being in a brick-and-mortar school at all. As a result, I was forced to leave school early and be absent more days than I could count. Further, my mental state was severely affected by a physical illness I was not taking time off necessary to heal completely. And spiritually, I was not truly exercising the faith I had grown to lean so much on in times such as these. Between the inconsistency of my presence in the classroom and students in and out of quarantine, I knew that I could no longer sustain this constant state of "flux." If I did not choose this temporary leave of absence to get myself together, I would not make it through the school year.

In all honesty, I never did indeed "step away" or unplug. I completed and submitted lesson plans and assignments, checked emails, and even still participated in and held a handful of mandatory Zoom sessions for meetings or events I had previously committed to attend. Ironically, I felt no added stress by completing those tasks. But it was something about having to wake up at the crack of dawn, get myself ready, prepare my son's day (backpack, lunch, etc.) so that my husband could take him to school after I left, and finally put on that brave face upon entering school when in fact, I was sinking lower and lower inside. I felt myself slipping into something I was not sure I was going to pull myself out of.

I had been to the hospital a few times, trying to see if I could mistakenly blame what was happening to me solely on my physical illness. Unfortunately, it took the second emergency room doctor to finally get to what now seems the obvious the roots of my problems.

"Are you under any stress?" I looked up at him with tears streaming down my face as he continued. "What do you do for a living?"

I had seen the same sad and almost pity-filled look on many faces when I told people I was a teacher, but this time, it was different.

"I can't imagine all that teachers are dealing with these days." He told me how his sister had a son with autism, how she rarely slept, and popped Motrin like it was candy. I could relate. She also had a loving and supportive husband, the same as I did, but like me, even with a two-parent household, the stress was still overwhelming. The tears poured uncontrollably as I proceeded to tell him about my life being a mother, a teacher, a wife, a daughter…he changed from a doctor to a therapist. I sat with that IV (intravenous) with my now therapist-doctor, getting necessary fluids I had been depriving myself of and IV pain meds for severe headaches that had been plaguing me with no relief for weeks. He listened to my woes with the same concerned ear I had often given to so many others.

"If you don't figure out a way to deal with some of this stress, you are going to end up staying in the hospital." The words heart attack and stroke echoed faintly in my pounding head. It was then that I decided to go on medical stress leave.

There are so many takeaways I am learning from this leave. My absence became the epitome of vulnerability in what seemed to be a forced, raw look at my humanity. I had taken on the burdens of the world in some misguided Herculean effort and thought I could sustain it all: family, work, and life in general. I had been in education for over twenty years and a mother for almost seven, and the stress had finally taken its toll on me. The biggest lesson I learned was when it came to my son. If I became so stressed that I could not ensure my child's needs were being met, how could I take care of the needs of other children? I needed to re-assess my priorities in life.

I am accountable for the needs of my child above all else. My health, state of mind, and life had to become my focus for once. Self-care became my new strategy in my effort to care for others. What is my advice to teachers who may be considering taking a leave of absence? Please do it! This temporary shift to "self" will be the best thing you can do if you plan on staying in education. The state of education these days has proven that if we don't take care of ourselves, who else will? 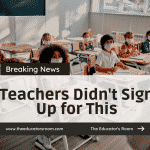 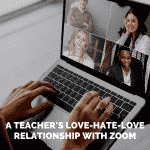 A Teacher's Love-Hate-Love Relationship with Zoom
« The Teacher Resignation I Never Saw Coming: My Own
Filling Your Cup with Science »