The national debate over the Trump Administration policy of separating children from their parents at the southern border has reached a fever pitch. Images and audio of crying children, traumatized by the removal of their parents to detention facilities while the children are detained in what amounts to cages, have preoccupied the national media and gripped the nation. The President and his cabinet officials, namely Attorney General Jeff Sessions and Homeland Security Secretary Kirstjen Nielsen, have scrambled to both explain the policy and put the blame on everyone but the President, claiming the policy was generated by Democrats in Congress under previous administrations.

As I am writing, the national news outlets have all posted headlines that read “Trump backs down, will sign an executive order halting family separations.” Going forward, teachers must be educated on this issue, its impact on children, and what the results will be on teachers as a profession. The separation of children from their parents is a form of child abuse, and as teachers, we must speak out against it, no matter where any of us fall on the political spectrum.

The separation of children from their parents is a form of child abuse, and as teachers, we must speak out against it, no matter where any of us fall on the political spectrum. Click To Tweet

As I watched events unfold today, I found the following graphic on a fellow educator’s Facebook wall entitled "'Illegal' Aliens Separated From Kids For Dummies."  In it was described all the rationales for why separating children from their parents at the border was a good idea. At the bottom read the line, "Simple! No crime = no separation!"

My initial reaction was that these claims are false or greatly exaggerated. Research showed that much of these assertions are anti-immigrant propaganda fed to the Trump base to support his racist policy. In an article by Michelle Martin, Ph.D. from Department of Social Work at California State University, Fullerton (CSUF), these myths are dispelled one by one. I had to ask myself how a teacher who is well-educated and who claims to be an advocate for children fall so easily into the trap of the “Big Lie.”

During the rise of Fascism in Germany in the 1930s, propaganda minister Joseph Goebbels put forth the maxim that if a lie was told often enough and big enough, the general populace would begin to believe it. As it has been with so many Trump policies and tweeted assertions, misinformation has become weaponized and used to indoctrinate those who support the president’s agenda. Teachers must be much better at critical thinking so that we can continue to be effective advocates for children, no matter what their immigration status. Would any teacher refuse to educate a child because that child might be undocumented? But these issues go deeper than whether or not we would make them feel welcome in our classroom. If we do not actively oppose this policy of separating children from their parents, we are complicit in state-sponsored child abuse.

If you may be reading this and reacting with the thought that this is not child abuse, please refer to author Amy Banks, writing in Psychology Today, in her article “Separating Parents from Children: A Policy of Abuse?“ In it, she writes that

[w]hen separated from his parents, a child’s nervous system sends out a loud signal to signify that he is in grave danger. The child will become dysregulated, extremely anxious and stressed out – he will protest by crying out for his parent as a full load of adrenaline or norepinephrine is surging through his system. The child separated from his parent is terrified and because the brain function to modulate effect is built within this caretaking relationship and is ongoing well into the late teen years, that child is also not able to calm the terror. Over time, if the parent does not respond (or in this case can not respond), the child will flip into a parasympathetic shutdown of his body creating a state of learned helplessness or despondency.  At this persists, the child enters an extremely dangerous state called failure to thrive in the attachment literature.  (Banks, 2018)

Her article cites numerous longitudinal studies and scientific literature that supports her thesis. As news reports have indicated, the federal bureaucracy is engaging in processes that disperse family members across the United States with diminishing chances of reunification. Three federal agencies are failing to communicate with each other as the adults await asylum hearings, have their cases adjudicated, and some parents may be deported without their children. The results of the Trump Administration policy will be long-lasting and devastating for these families, for the social safety net that is needed to provide a nurturing environment for the children, and for the status of the United States as a beacon for human rights around the world.

In fact, the US State Department just announced its withdrawal from the United Nation Human Rights Commission, ostensibly because of its “political bias,” but more realistically to deflect criticism of the Trump Administration for its clear human rights abuses.

In a white paper published by the National Child Traumatic Stress Network (2006), a variety of strategies for teaching immigrant and refugee students were outlined. Even if we support the “zero tolerance policy” instituted by the Trump administration, we have an obligation to all students to provide a safe, open, and comforting environment in which they can learn and thrive. Teachers can make tutors available for students and provide additional support through their English Language Learner (ELL) staff.

Teachers can encourage students who have come from violent or challenging home environments (such as many of the children at the US southern border) to share their stories but they must do so without pressuring students to reveal the source of their trauma. Teachers must also be sensitive to lessons that reflect the realities of war, genocide, and organized crime since many refugee children come to the United States to escape these types of conditions.

Teachers of social sciences, namely US History and US Government or Civics, must be ready to structure discussions about this issue in an objective and non-partisan, non-emotional way. There are numerous parallels to the current controversy in American History that reflect American racism and discrimination, and teachers should be ready to point them out. Teachers must avoid overt or outright castigation of the President as racist since this would alienate students and parents who support the president or who agree with a hard-line immigration policy. Instead, teachers can create lesson plans that outline the differences and the similarities with past and current legislation while allowing students to shape the debate and arrive at their own conclusions, some of which may or may not align with the teacher’s own views.

If students can support their thesis, use data to support their assertions, and who can formulate a coherent opinion with factual support, then those students have exceeded the standard in the curriculum at hand. If their facts are off-kilter,  the teacher has a responsibility to point that out. It is not a teacher’s responsibility to instruct students as to what to think about the issue. Teachers must help students define racism, identify bias and propaganda,  and help them draw their own conclusions based on trends in history and current events.

Educators have a teachable moment, couched in the current debate, to teach students how to be decent human beings. Click To Tweet

Bottom line: Educators have a teachable moment, couched in the current debate, to teach students how to be decent human beings. Upholding America as a place where immigrants can feel welcome, recognizing the importance of the immigrant experience in the development of America as a world power, understanding the importance of diversity as a strength in a pluralistic democracy, and placing racism in its historical context so that it can be identified and eliminated in our contemporary surroundings: these are the lessons that teachers and administrators must be ready to bring into the classroom without pointing fingers, without personal attacks, or by criticizing anyone’s politics. Teaching students how to agree to disagree does not mean that we as teachers must give up the moral high ground. We just have to be sensitive to the processes by which we achieve our goals. 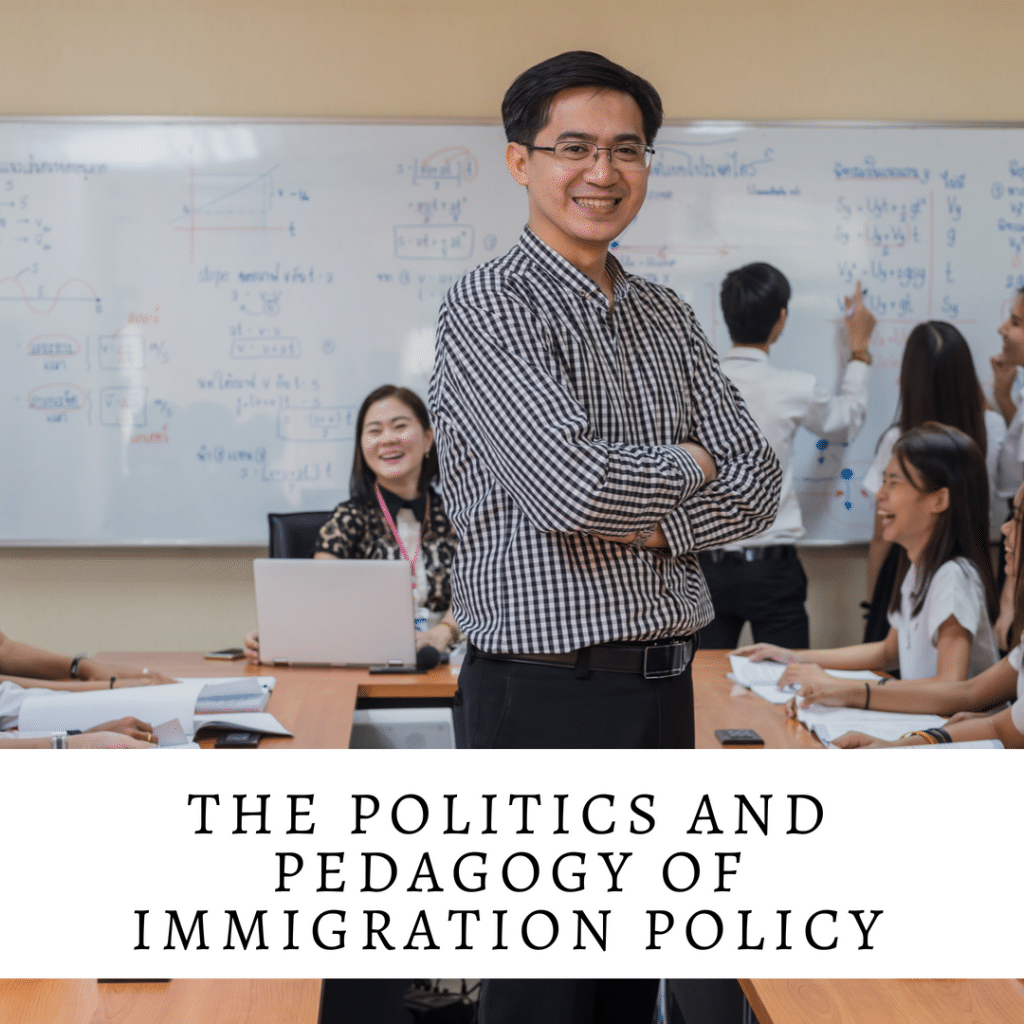 Civility in the Classroom and the Rise of American Fascism
« The Quest for the "Perfect" World Literature Book
The Burnout Phenomenon: Getting Comfortable with "No" »